Alber Elbaz: "I Hope that Lanvin Finds the Business Vision it Needs"

In a personal statement, Alber Elbaz has confirmed he was ousted from his position as the creative director of Lanvin after 14 years.

PARIS, France — Alber Elbaz is stepping down from his position as the creative director of Lanvin after 14 years in the job, a spokesperson for the label has confirmed to BoF. The Israeli designer, who joined the brand in 2001, was responsible for transforming the once-ailing French couture house into a well-developed, global luxury label with his playful and feminine designs.

The break between Elbaz and the brand is said to have followed disagreements between the designer and Lanvin’s owner Shaw-Lan Wang and chief executive Michèle Huiban, though minutes after this report was published, the brand’s official Instagram account posted an image of the designer with actress Meryl Streep at Fashion Group International's Night of Stars with the caption: “We love you Alber!"

Lanvin employees were summoned to a company-wide meeting in Paris this afternoon to discuss the news, while members of Elbaz’s design team were informed of the decision earlier this morning.

It is widely reported that Elbaz has a stake of 10 percent or greater in Lanvin, which has no doubt played a role in keeping the designer at the house for 14 years. But the report of Elbaz’s departure casts doubt as to whether this was enough to retain him.

In 2014, Lanvin had estimated revenues of 250 million euros (about $321 million) but the brand’s once-rapid growth has slowed and it is widely believed that the label needs additional support — such as that offered by a major luxury group — to take the business to the next level. However, market sources say owner Shaw-Lan Wang is demanding too high a price, which may have frustrated Elbaz.

Nonetheless, Elbaz will surely receive a significant payout from Lanvin, echoing Nicholas Ghesquière's departure from Balenciaga in 2012. Ghesquière received $42.3 million for the sale of his 10 percent stake in the business.

Elbaz’s exit from Lanvin places him in prime position for the post of artistic director of Dior, left open by the departure of Raf Simons last week.

It has emerged that Alber Elbaz was discharged from his position as creative director of Lanvin at what the designer, in a statement, called "the decision of the company's majority shareholder," referring to Lanvin’s owner Shaw-Lan Wang.

"At this time of my departure from Lanvin on the decision of the company’s majority shareholder, I wish to express my gratitude and warm thoughts to all those who have worked with me passionately on the revival of Lanvin over the last 14 years; express my affection to all my wonderful colleagues in the Lanvin ateliers who accompanied me, and who enriched and supported my work. Together we have met the creative challenge presented by Lanvin and have restored its radiance and have returned it to its rightful position among France’s absolute luxury fashion houses.

"I also wish to express my profound and deepest gratitude to all of the clients and friends, to the French and international press and to all those business partners who collaborated with Lanvin, providing us with support since 2001."

"I wish the house of Lanvin the future it deserves among the best French luxury brands, and hope that it finds the business vision it needs to engage in the right way forward." 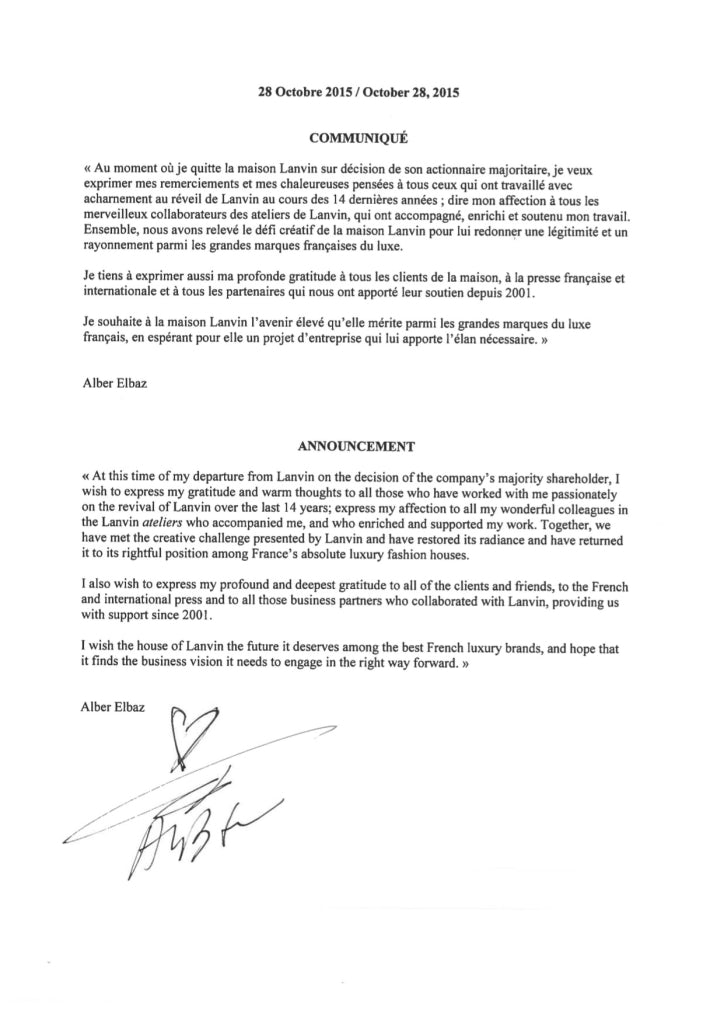