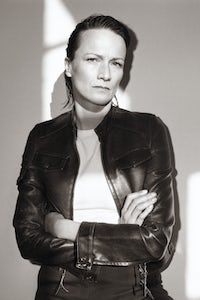 PARIS, France — Courrèges has appointed Yolanda Zobel as its new artistic director, effective February 26. She succeeds design duo Sébastien Meyer and Arnaud Vaillant, who announced their departure from the house last July after just two years at the creative helm.

"I am deeply thrilled, moved and inspired to be given the opportunity to create a new Courrèges," said Zobel in a statement. "It is a house that has inspired me and an entire generation of designers with its anti-conformism, its avant-garde spirit and its irresistible joie de vivre."

Zobel grew up in Germany and studied fashion in Berlin, before going on to work for Giorgio Armani, Chloé and Acne Studios. Most recently, she served as head of womenswear and creative management at Jil Sander. Her first collection for Courrèges will be Spring/Summer 2019, presented at the end of September.

Zobel's is the first major appointment overseen by new chief executive Christina Ahlers, who took up her role on Monday. "I am convinced of her ability to breathe new creative life into the brand," Ahlers said in a statement. "Her vision matches perfectly with the ambition of Courrèges."

Founded in 1961 by André Courrèges and his partner Coqueline, the brand became known for its modernist, futuristic aesthetic. In 2011, they sold the house to French advertising executives Jacques Bungert and Frédéric Torloting.