SAN FRANCISCO, United States — At Banana Republic, employee engagement is rooted in providing individuals with the opportunity to not only bring their authentic self to work, but to actively channel it into their strategies and output.

Owned by Gap Inc since 1983, Banana Republic is the group’s premium offering and forms part of the group’s third-largest global store network, behind Inditex and the H&M Group. In the fiscal year 2018, Gap Inc reported net sales of nearly $16.6 billion, of which Banana Republic accounted for over $2.4 billion.

In April 2018, Banana Republic relocated from New York to San Francisco, uniting the brand with its parent company and indeed its own roots. BoF sits down with Banana Republic’s two key design leaders — Nicole Wiesmann, head of men’s design, and Omar Nobil, head of women’s design — to gain insight into how the move has changed their perspectives and how they push their teams to exercise their creativity in support of their individual values. 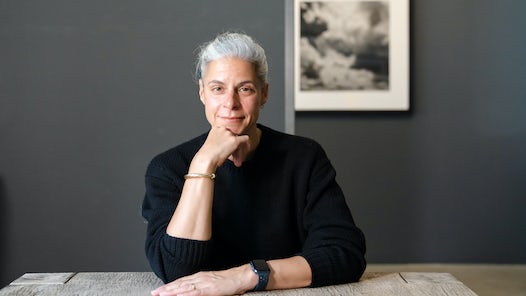 Having completed a degree in fashion design at the University of Cincinnati, Nicole Wiesmann worked at Tommy Hilfiger, Structure and Nautica before joining Banana Republic in 2003. Over the next decade, she built a career at the company that saw her promoted through the ranks to a senior design director.

In 2013, Wiesmann left the brand to join accessible luxury brand Vince. Soon enough however, she chose to return to Banana Republic as a result of the culture — something she describes as “amazingly optimistic.” Embodying Banana Republic’s “No Boundaries” spirit, Wiesmann works hard to inspire her team and enable their work to authentically reflect the brand’s pioneering spirit. From fabrication to trend selection, working styles and global inspirations, she seeks to nurture the journeyman in each and every one of her team members.

How would you describe the company culture at Banana Republic?

NW: I think the culture here is genuinely optimistic. I think partially because of the fact we are located in San Francisco and partially because the founders, the Fishers — a couple who are both equally responsible for running the business — believe so strongly in the power of creativity to inspire. They have an amazing art collection, which they share with the rest of the company.

In the New York building, there’s Lichtensteins hanging everywhere in the hallway. In San Francisco, there’s a five-storey high Richard Serra sculpture — they actually brought the sculpture in and built the atrium around it. There’s this beautiful sense of art and culture that permeates throughout the whole company.

When I came back in 2017, Banana Republic was undergoing this amazing change, bringing back innovation and working on fabrics, which for me as a menswear designer are the most important thing. Vince was also a much smaller company, and as a commercial designer, there’s something exciting about bringing quality product to the market at scale — even if it sometimes can be a bit scary ordering 800,000 yards of fabric from a mill in Italy instead of just 1,000 units of a garment.

How have you seen technology transform the working environment?

NW: I think the last four years have been a really exciting time in the industry. When I came back, the focus was on fabric innovation, so we looked at performance brands and then how we could apply those technologies to our own product. We’re now looking at sustainability and the tech around that. So, we’re trialling 3D sketching where you’re actually building the pattern while you’re designing the garment, which is helping reduce the amount of sampling and the internal waste that we have.

When an employer empowers you, you become a business owner and more entrepreneurial.

We’re still in the early stages, but the potential is enormous; it enables us to make choices very quickly as well as get feedback from the customer. I was a little nervous that this might encroach on my design team’s creativity at the start, but the team are so tuned into tech that it’s just an extension of how they already work. My goal is to continue to improve how we work and that’s why this is exciting — I haven’t seen this kind of shift for years. We have loads of support from our leadership on this too, all the way up to our CEO, Art Peck.

How do you create purpose and motivate your team?

NW: I think when an employer empowers you, you become a business owner and more entrepreneurial, making decisions that will hopefully allow the company to grow. The culture in the design studio is super relaxed. The team all hang out, they all inspire each other, they push each other, and they push the envelope. We have a culture where we can have any kind of dialogue. I’m not always right and I always prefer to have a conversation about ideas and be swayed.

My team is just brilliant at bringing new ideas they’re passionate about. Sometimes they are coming to the table with really new ideas, which can make you uncomfortable from a leadership level because you have to work out, “How are we going to make this? Scale this? We’re a big company – how do we actually bring this to market?” But they’re so passionate about it — we really do try to figure out a way to make it work.

It’s a very productive team — we all pretty much moved out here. The men’s team kept the majority of its designers in the move from New York to San Francisco, so there’s a good culture that’s been with the company for a while. Since we have been here, we have layered on some new people and it’s been a great experience. San Francisco is different from New York, it’s a very different way of working, but we love it.

What do you look for when you’re hiring?

NW: Personally, I think it’s really important that a designer has a strong point of view. This can be around performance, sustainability, fabrics, whatever — but it has to be a strong point of view. When you work for a big company, you need this because you have a lot of information coming at you from all the other teams, and if you don’t have that willpower, you’re going to get pulled in a lot of different directions.

When I’m looking at portfolios, I want to see a thread running through them that demonstrates this viewpoint. You need to be aware of what’s going on in the world and have a point of view as all of these things are going to end up impacting what you’re designing. 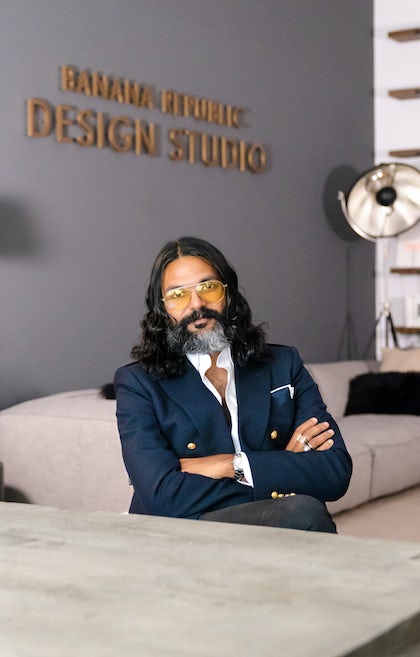 A believer in taking creative risks while building environments that provide the security that supports professional and personal growth, Omar Nobil has occupied a role in Banana Republic’s design team for much of his professional life. Having graduated from Central Saint Martins and following brief stints supporting Hussein Chalayan in a PR/special projects role and a design role at Abercrombie, he joined Banana Republic in 2006.

Nobil puts the longevity of his career at one company down to his ability to build purpose into his work. A keen activist and advocate for a more sustainable future, the Head of Womenswear Design was encouraged by his employers to actively incorporate his private passion into his professional responsibilities and creative output.

How would you describe the culture of Banana Republic?

ON: Every voice matters. Everyone is expected and encouraged to have a point of view. Each season, we have a workshop in which all members of the design team participate. We look at the trends really holistically and identify areas that inspire us together. There’s no judgement and there are no bad ideas. The team is encouraged to challenge their own perceptions in a supportive and exciting environment.

How does Banana Republic compare with other companies?

ON: In other places that I’ve worked, I’ve felt a sense of competition a lot more, even within a division or team. Here, there is a much more supportive attitude and sentiment across the team. You set that as a leader by explicitly stating that’s the way we’re going to work and I’ve found the design team incredibly receptive to that. A lot of the time, they’ve been at brands that have felt very dog-eat-dog, and once you remove that tension and allow them to understand that we’re all on the same team and success for one is success for all, it’s very welcoming.

Every voice matters. Everyone is expected and encouraged to have a point of view.

We also try to nurture an environment in which failure is acknowledged, accepted and overcome. The thing with failure is that you have to actually recognise it as failure, and you then have to own it. There can be a tendency in large corporations in this industry to blame the weather, or other macro factors. You ultimately have to take accountability for it to move forward. That’s something that I encourage.

What skillsets are you looking for in prospective team members?

ON: We have very high standards of talent that I’m uncompromising on. I need designers who are thoughtful in the way they approach their work and are respectful of team players. Some designers are hands-on, they love to create, whereas some are more about exploring ideas through thorough research.

There’s not one archetype we have; we need a diverse range of talents, approaches and backgrounds to have the best possible team. It’s really about understanding what motivates each person.

A lot of the talent we did bring over from New York. It’s pretty extraordinary that so many people uprooted their personal and professional lives, myself included, to move west with the company. I think it says something about the culture.

The designers we found locally have been an immense support to the transplants on the team and have guided them as they had to navigate their way through San Francisco. And now, a year in, there’s a very healthy West Coast glow to the team and they all seem to have become very outdoorsy. Personally, I’ve found the move west has had a really positive impact on my feelings of creative headspace — it’s helped me evolve my notions of the brand’s aesthetic. The Bay Area is the birthplace of Banana Republic and the move has felt like this interesting homecoming. It has had a tangible effect on the way I approach our colour palettes for example. It’s a truly inspiring place to be creative.

This is a sponsored feature paid for by Banana Republic as part of a BoF Careers partnership. To explore careers at Banana Republic, please click here.