London-based magazine The Gentlewoman is known for its mix of glamour, pragmatism, modernity and warmth. BoF sits down with editor-in-chief Penny Martin.

LONDON, United Kingdom — A trace of the academic is palpable in Penny Martin, editor-in-chief of The Gentlewoman. Her past as chair of fashion imagery at the University of the Arts, London, and years spent studying for a PhD (her unfinished thesis was on British Vogue and Thatcherism in the 1980s) is apparent in the way she responds to questions. “Could you qualify that?” she asks several times, carefully considering the implications of what has been posed.

Indeed, in a fashion media landscape rife with hype and hyperbole, there is no flippancy in the way Martin describes what she does at The Gentlewoman, launched in 2010 as a biannual sister publication to Gert Jonkers and Jop van Bennekom's Fantastic Man.

The future is about real conversations rather than a cabaret of the nameless.

“At that time, we felt there was a dearth of intelligent perspectives on fashion and there wasn't really a fashion magazine for actual readers. I guess you could say that there are a few more magazines like us now. But when we started, many magazines had the visual right, or had the text right, but very few managed to reconcile the two. I think that’s very difficult — to produce long-form journalism and a personality-centred magazine that has equally eloquent imagery and graphic design.”

At Martin's first meeting to discuss the creation of The Gentlewoman with Jonkers, Van Bennekom and art director Veronica Ditting, the team had just three sheets of visual references. "It just kind of took all four of us to look at them — a cover from Town and a spread from Bauhaus and a strange curio. We didn't need to say anything more."

With an early sense of visual direction, Martin and her team began formulating what the magazine would say: "We started by building up a common aesthetic. Quite Modernist. You might say it had parity with what was happening with Céline at the time. Coincidentally or not. We launched at the same time as [The Gentlewoman's first cover star Phoebe Philo's] first collection [for Céline] arrived in stores." 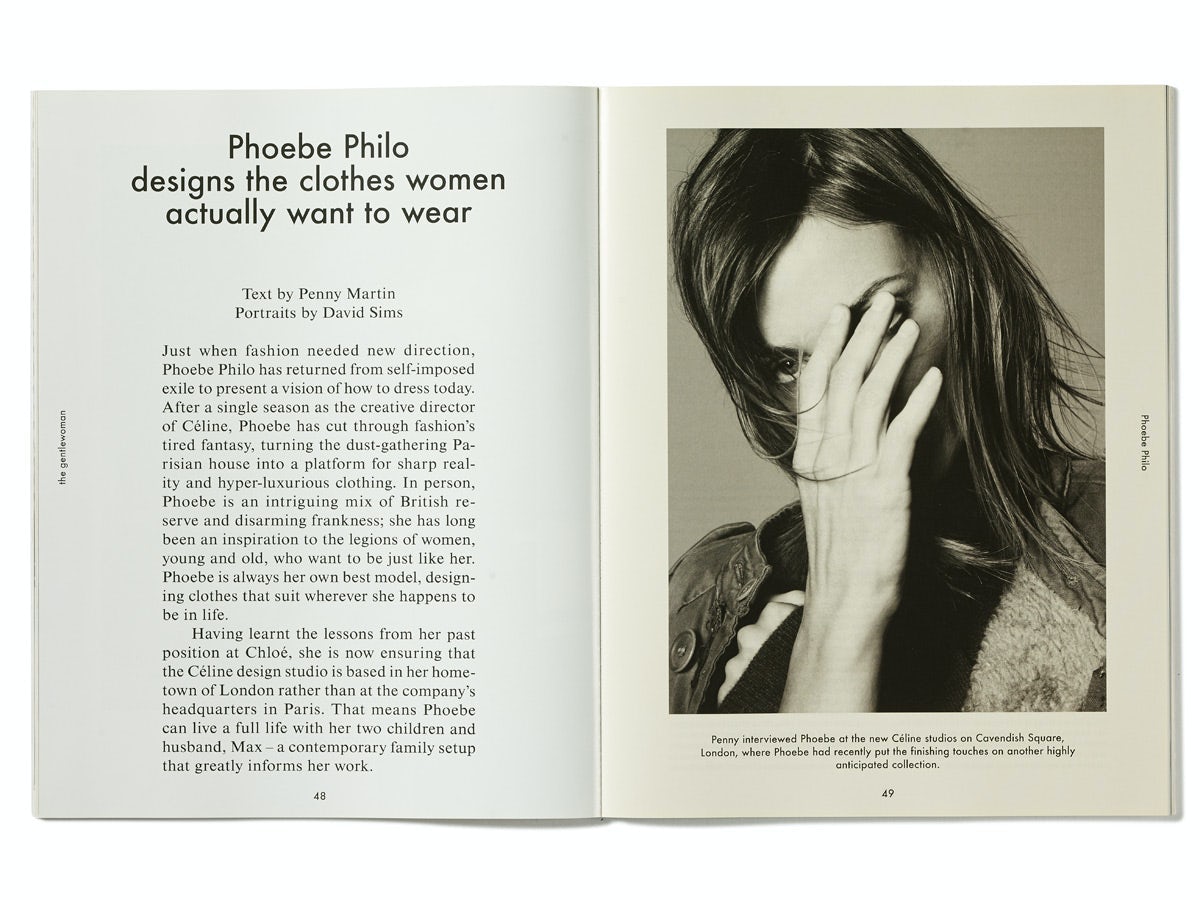 "To a large extent, we were also interested in that wardrobe-based approach to dressing that Fantastic Man had been excelling at for five or so years — that sartorial fascination with dressing rather than trend-led fashion. We explored that 'good taste' territory quite exhaustively as a sort of positioning statement for the first two or three years."

But if there was one critique that was lobbed at The Gentlewoman's early issues (the magazine has published nine issues so far) it was the tyranny of its own good taste, which might have grown suffocating, had the magazine not evolved its approach and "let a little bit of razzle in," as Martin puts it. "In the last three issues, we've started to build up the fashion section and make it more coherent and less dispersed throughout the magazine. A bit more outspoken: maybe we're a bit livelier, even a bit sexier." Before The Gentlewoman, Martin had never edited a magazine before, though she was editor-in-chief of Nick Knight's pioneering fashion website Showstudio from 2001 to 2008.

Key to developing the magazine’s visual sensibility was fashion director Jonathan Kaye. “What Jonathan Kaye is very good at, I think, is creating solutions — things so seductive yet pragmatic that you can't believe you hadn't thought of them before. For the woman who feels overwhelmed with choice, he’s like a really good girlfriend who says, ‘Ok, calm down, so you do a sweatshirt and a second-hand trouser with a kitten-heel pump and that’s your solution.’ But, of course, it's not just any sweater and trouser. He's fastidious and it's the one [look] that's going to get you through without any embarrassing fuss. I think that's the least patronising way to speak to grown, clever women about clothes. For last autumn, he did three-quarter-length skirts with a boot and a fuzzy jumper. It’s ‘Ok, here's three things, that will work.’ There’s something extremely friendly, while still being directional [about his approach] that I love.” 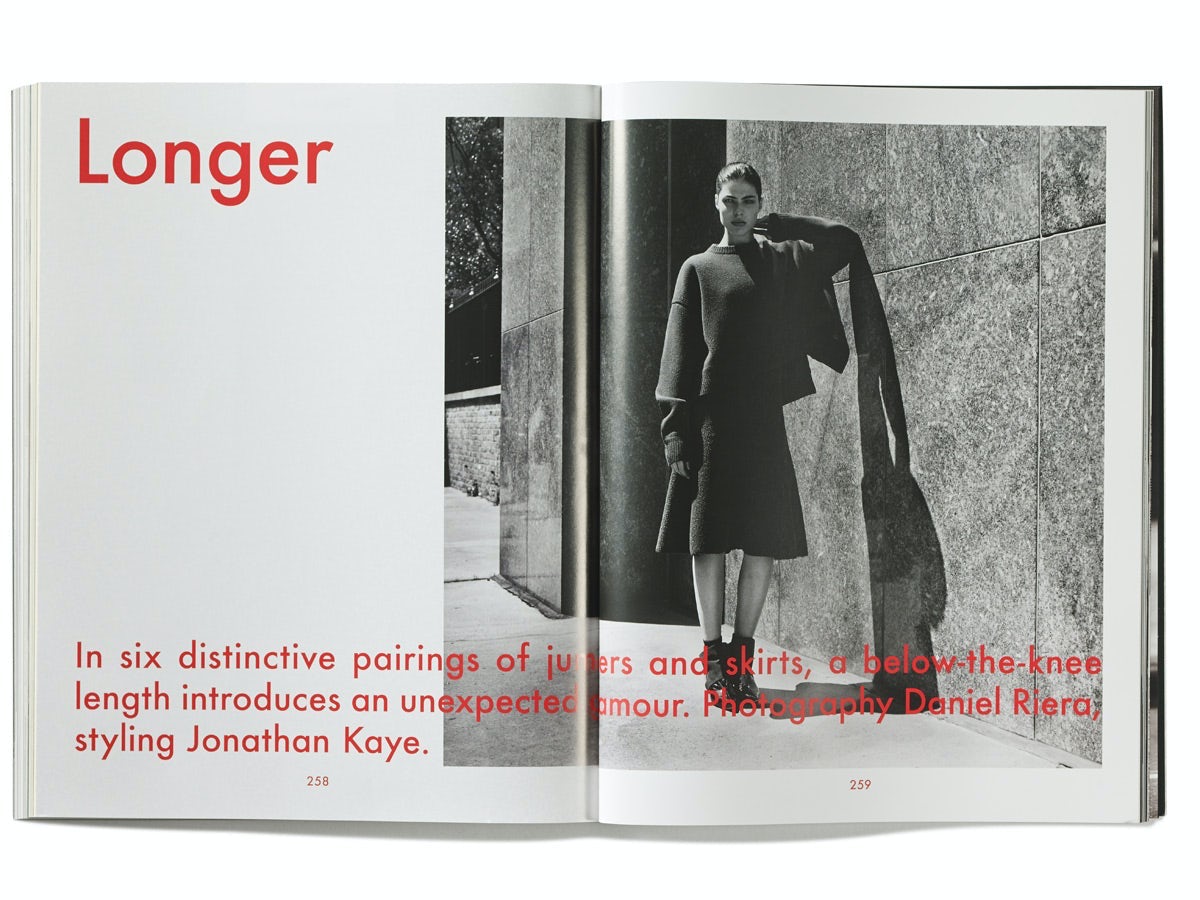 This practical and modern approach is reflected in The Gentlewoman's overall editorial point of view, which, according to Martin, begins with the woman and not the product. "I'm interested in what [The Gentlewoman] tells you about how modern women live, from the way they drink, dance, drive and speak to the way they sign their letters or conduct their divorces. We make sure that the magazine is not just a pornography of product that is supposedly interesting to women. It's about putting those women at the centre of the material world around them. That balance is important to us."

Cover stars have ranged from 88-year-old actor Angela Lansbury, shot in a peach silk blouse and Terry Richardson's black frame glasses, to popstar Beyoncé, looking calm, strong and composed in Dior with a face free of make-up. Meanwhile, on the inside, The Gentlewoman has profiled a wide range of women at the top of their game, including gardeners, entrepreneurs, novelists, artists and news anchors.

Like many editors of women's magazines, Martin is often asked about her publication's stance on feminism. "When people ask me about politics or feminism, I say that it isn't a magazine about those things, it's a magazine informed by those things — among others. Is it a feminist magazine? Well, it's made by feminist people, so what do you think?! But I don't want to make those values and principles fashionable, because I don't want to undermine them by turning them into an aesthetic and I don't want them to pass into the realm of the unfashionable. Let's just assume that we all agree there should be equal pay and childcare and get on with it, eh?"

The magazine is based in a Victorian townhouse around the corner from the British Museum in London’s Bloomsbury district, a neighborhood know for its literary connections (Martin lives and also has a home office in the calm quarters of Ealing in West London). The team consists of a skeleton crew of around five, though this number swells to around ten during production and does not include the magazine’s extensive network of satellite contributors. But the leanness of the core staff has its benefits, says Martin. “We’re not massive, but that means we can work decisively and quite fast. We don’t need to focus-group [test] anything — you know from seeing the whites of one another’s eyes how excited or panic-stricken everyone else is about an idea.”

“There’s a lot of excitement through the days and then we open another bottle of wine at 9pm to get through the next shift,” she continues. “It’s an extremely ambitious, challenging environment. One might think that when you’re approaching the tenth issue that you might be giving into comfort a bit and tending to your consultancies, but that’s not what the environment is here. I work really long hours and I don’t have much of a boundary between personal space and work space, because this is what I would have done as a hobby if I'd had the chance, quite frankly.”

Small through the team may be, The Gentlewoman has generated highly respectable results for an independent title. "We were quite cocky in printing as many [copies] as Fantastic Man when we first launched, which was 72,000 in 2010 and they'd just had Ewan McGregor on the cover of their issue, which was a huge issue," says Martin. "We thought 'We'll be lucky,' but we actually sold out super-fast."

The Gentlewoman printed 98,000 copies of the Beyoncé issue, which sold out and was re-ordered multiple times by the magazine's distributor. "I know that our sell-through is amazing and that comparable magazines sell about a third of what they produce. We're told there's a strong case to come out more frequently. But we're not convinced that's necessarily the best allocation of our resources, when there are other things we could do or be."

"Other things" includes the recently formed Gentlewoman Club which extends the magazine's brand into physical events where readers can interact and chat with editors. "We're starting to develop our website as a kind of portal for real things to happen rather than a bogus virtual community with likes and message boards. I am so not interested in that. I think that's over."

“For me, the future is going to be about in-person transactions and real conversations, skills and sharing in real spaces, rather than the cabaret of the nameless we’ve witnessed over the past decade.”