Sølve Sundsbø, who learned his craft as Nick Knight’s assistant in the 1990s, has made a name for himself with fantastical images that defy belief. The Creative Class is supported by CLIO Image, an awards show honouring creative excellence in fashion, beauty and retail.

LONDON, United Kingdom — Sølve Sundsbø considers photography his “calling” and traces his desire to capture fantastical images with a camera back to a moment early in his life. “I was walking home from school in Norway as a very young boy, probably about 11 years of age, and there was a bush absolutely covered in really fine ice and the light was shining from behind it. It looked incredible. I thought, ‘Wow, I need to know how to photograph that.’ I wanted to keep that moment because it was so special.” The transfiguration of a roadside shrub into an extraordinary spectacle through the effects of light and ice captures the alchemic quality of Sundsbø’s photography, which often uses light to lend the human body an otherworldly aura.

A little over thirty years after that childhood encounter, Sundsbø is couched in a freshly revamped studio just off London’s Hoxton Square, populated by his own team and housing, among other things, a temperature controlled room for his hard-drive and a neatly catalogued (and vast) archive of labelled grey boxes. He has built a portfolio that many would dream of, with stacks of editorial for the likes of Vogue Italia, Vogue China, Love, W, i-D, The New York Times and The Face as well as a roster of commercial clients as long as your arm, including Alexander McQueen, Chanel, Gucci, Yves Saint Laurent, Dolce & Gabbana, Louis Vuitton, Hermès and Givenchy. Sundsbø has also had group and solo exhibitions; made films for Chanel, Gucci, Lancôme, Love, Nike and SHOWstudio; and won an Emmy Award in 2011 for his New York Times documentary “14 Actors Acting.” However, despite the mountain of evidence to the contrary, Sundsbø does not perceive himself to be successful, as such — “You don’t think of yourself like that, do you?” he commented. “I’m an opportunist, I’m good at seizing opportunities.”

Sundsbø’s childhood awareness of photography developed through his teenage years. “It materialised into something more real. That wish to preserve a moment came later on again with skiing and going to concerts. I would bring a camera to everything. I worked in a record shop for about six years and I went to so many gigs, whether it was friends playing or Nirvana or Miles Davis.” At that time, it was the identities of youth, rather than fashion, that interested Sundsbø. “It was more that music was important, The Smiths were important, Nirvana was important, grunge was important and they all had very different looks. I am much more of a voyeur than wanting to belong to a fashion tribe.”

In his early twenties, Sundsbø decided to make photography his career. “I tried it out, liked it, found that people liked what I did and I felt like I had the potential to develop. My first work was done for the student newspaper. They were very open-minded and they had a darkroom. It was great fun. From there, it was a series of lucky coincidences, meeting people that led me to London and Craig McDean and Nick Knight, who I had admired from Norway.”

Landing in London in the early 1990s, after McDean encouraged him to move, Sundsbø fell in with the right crowd. After a few months on a photography course, McDean scored the young Norwegian a job as Knight’s assistant and the pair worked together for almost four years. “We did shoots for American Vogue and Dior campaigns with [John] Galliano and Nick.” Assisting Knight was hard work. “I didn’t have time to go out — I was finished with that. From 24, I worked until I was 28, all the time. Of course I did go out and I did have friends — but not very much.” The experience gained was indispensable, however. “That was my education. I didn’t come from an artistic background — I didn’t have a father that was a painter or a mother who was a designer or anything like that — I came from an academic, educated background. I had a really strong impression of the world when I got there [London], but they [McDean and Knight] opened up another door to the world of image making. Nick instilled in me that you should be idealistic, you should be courageous, you should be trying to push boundaries — it’s not a job, it’s a calling.” 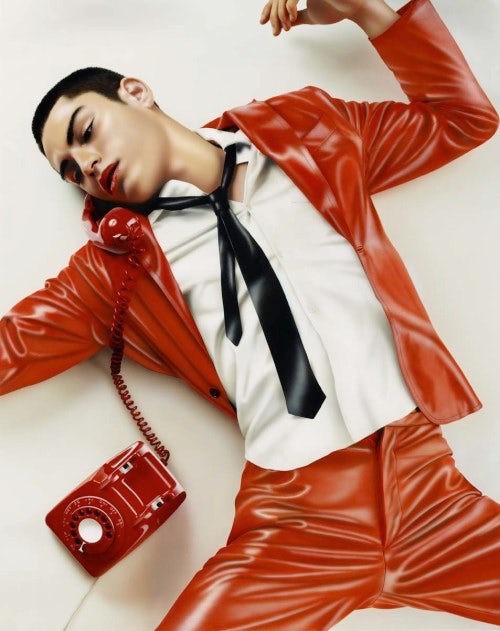 For Sundsbø, the challenge of having a mentor as influential as Knight was defining his own, distinct artistic voice. “The thing is, if you work with someone like Nick, or like Bruce Weber, you get coloured by it — we’re sitting here talking about him [Knight] now. It takes a bit of time and effort to move away from it,” he said. “The memory of when I first found my voice was not one thing. You do something and say, ‘Is that it?’ and then another and ask, ‘Is that it?’ and a third and a fourth. You look back at three or four things and then you can see something looking at them together.”

“The first stories were the wire frame story for Dazed & Confused, the airbrush story for The Face — that’s when I felt that I was finding my own voice. I went to Hyères [International Festival of Fashion and Photography, where he was voted best newcomer] in 1999 after about a year of fashion photography and, when I hung my stuff on the wall, people said, ‘Oh, did you do that, and that, and that?’ There were six different things. People thought, ‘Oh, you did all of them but they all look so different.’ I remember thinking, ‘I’m all of those things, not just one.’”

Despite the diversity of his work, there are threads that run through Sundsbø’s oeuvre: an extraordinary use of lighting, an engagement with technology, a high level of precision, and a taste for fantasy.

“I live a very real life: I’ve got kids, I’ve got a wife, I’ve got homework and schoolwork, so I don’t feel like I need to do a sort of kitchen sink drama in my photographs. I admire people who do, but that’s not who I am. I am trying to find something less real in my work, more a fantasy of what it could be or what it should be than what it is — idealising things.” 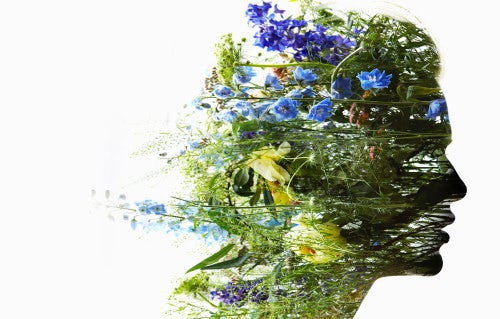 Though it might be hard to believe when looking at his images, some of Sundsbø’s most surreal and digital-looking work is achieved through the interplay of traditional photography and technology — or simply through the sophisticated manipulation of lighting or painting directly onto prints.

“We just did a Prada Speciale shoot for Italian Vogue, mixing old-school photography and 3D scanning, where 90 percent of it is photography. What I like about that is that the photography style is quite old fashioned with a grey background, very simple hair, simple make up and really simple clothes, then you have these things that aren’t real, which make it all extremely modern — but it still almost looks like it’s part of the old photograph. I love things like that.”

On the topic of a recent image of rising pop star FKA Twigs for V Magazine, in which Twigs appears to be almost computer-generated, radiating fine rays of light that dance around her body, Sundsbø takes the delight of a magician whose audience are not wise to his tricks: “I can tell you, but I’ll have to kill you! With the FKA Twigs shoot, it’s just moving lights — super old fashioned. There’s no mumbo jumbo.” 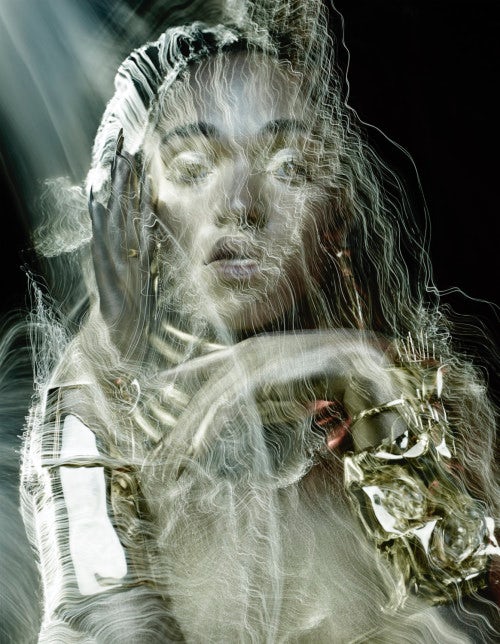 It seemed almost unbelievable, but then Sundsbø showed this reporter his images from a Chanel beauty campaign, to demonstrate how impactful visual effects had been achieved through manipulation of light only, rather than tech-wizardry. For some of his images, of course, like the “Angel” perfume advert he did for Thierry Mugler, where purple flames shoot out from the image, computers have played a significant role. “Believe me, I use computers, but it’s really important to make it look good in the first place,” he said. “What most people don’t understand about photography is that you have to make the person you are photographing interesting or beautiful, but preferably both. If you can’t do that, then you’re out of a job. It doesn’t matter if you are shooting a model, or an editor, or a normal person — it’s the same,” he continued. 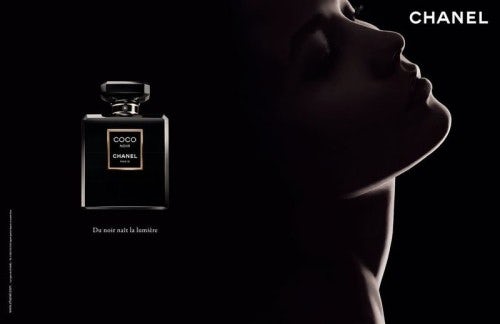 Sundsbø splits his time between commercial work and editorial work fairly evenly. “You might do half a year of editorial and half a year of commercial work. It’s always hand in hand at the same time.” Each comes with its own challenges. Beauty advertising, where you have “a very small stage to operate on,” is a speciality of Sundsbø’s. “If I only did editorial I would be broke. But with a commercial job you have a lot more people telling you what to do — there will be a hairstyle they want, a colour scheme they want, a background they want. A commercial shoot has a lot more limitations.” For editorial, the restrictions are budgetary, said Sundsbø, along with the growing expectation that photographers will also deliver a short digital film alongside their still images — for the same price and in the same time frame.

Indeed, Sundsbø considers digital film-making to be an essential skill for budding young image makers. “Try to do film because there still aren’t that many good filmmakers and there is so much demand. If you know how to edit and do music and do 3D, you are laughing. You don’t have to have a 10-year education to cut film, you can use the software.”

Editor’s Note: This article was revised on 16 January, 2015. An earlier version of this article misstated that Sølve Sundsbø did a shoot “mixing old-school photography and 3D scanning” for the Prada brand. He did not. It was a Prada speciale shoot for Italian Vogue. The article also misstated that Sølve Sundsbø shot the campaign for the perfume Alien by Thierry Mugler. This is incorrect. He shot the campaign for the brand's Angel perfume.