NEW YORK, United States — With a schedule and contact list fit to bursting, Derek Blasberg is one of fashion’s most well-connected professionals. A quick dip into his most recent Instagram posts shows Blasberg chauffeuring Marc Jacobs and his dog, Neville, around West Village, rubbing shoulders with US senator and presidential candidate, Kamala Harris, and gate-crashing Karlie Kloss’ “Galentine’s Day” party.

From St Louis in Missouri, “where ‘high fashion’ was the Gap store at the mall,” Blasberg moved nearly 1,000 miles across the US to study literature at New York University. Three years later, he graduated with two degrees, counted Gisele, Karen Elson and Amber Valleta as friends, and walked straight into his first job as an assistant at American Vogue.

Over his 15-year career, the writer, editor and TV personality has become an award-winning author; a columnist at numerous publications including Vanity Fair and Garage Magazine; hosted CNN Style on CNN International; worked with the likes of Karl Lagerfeld and David Bailey; and is now the head of fashion and beauty partnerships at YouTube. Here, he shares his advice on how to succeed in fashion.

At the beginning of your career, how did you start networking?

I’ve never liked that word “network.” It makes it sounds like all the relationships I have in the fashion world are professionally strategic, which is kind of offensive. I’ve carved out a family for myself in this business and I’m proud of it. Maybe that should be my first tip for working in fashion: If you don’t have a passion for it, don’t bother.

To be honest, I didn’t know this industry existed until I moved to New York to go to college. I grew up in St. Louis, Missouri, where “high fashion” was the Gap store at the mall and before YouTube hosted millions of hours of style programming for any secret fashion lover to see wherever they were in the world. So, when I got to New York and I discovered this glamorous, creative world I was like, “This is it. Sold!”

If you don’t have a passion for it, don’t bother.

The way it all started for me was with the girl who lived below me in my freshman dorm, my very first friend in the big city, who was a part-time student and part-time model with Elite. She introduced me to her agents, who became friends too, and they commissioned me to write the biographies of all the girls at the agency. That’s where I first met Gisele, Karen Elson, Amber Valleta.

In my sophomore year, I wrote press releases for a fashion PR company. I then interned at W magazine in my junior year and American Vogue in my senior year. After I graduated from New York University in 2004 with two degrees in Journalism and Dramatic Literature, I got a job as an assistant at Vogue. I turned out to be a terrible assistant and was fired from that job a year later, but that’s a whole other story.

Did you follow a golden rule as to how you conducted yourself?

When I was an intern, I overheard a Vogue editor explain the reason she always booked a certain model was because she was, and this is a direct quote, “happy to be here, easy to work with.” That clicked for me. Did I love waking up at 7am on a Saturday to unpack a bunch of trunks that had just come back from a shoot? Well, no. But I did it and I did it with a smile on my face, and the people I was working with were into that. Also, truth be told, coming from Missouri and suddenly being knee-high in couture dresses and diamond earrings wasn’t that hard to smile at.

If I had to add one thing to that golden rule, it would be, “never say no.” Can you make copies? (This was when people still made copies — am I dating myself?) Can you get coffee? Can you come in early tomorrow before you go to class? Do you want to come with us to this market appointment? We’re going for drinks later, if you want to join? Yes, to all of it. 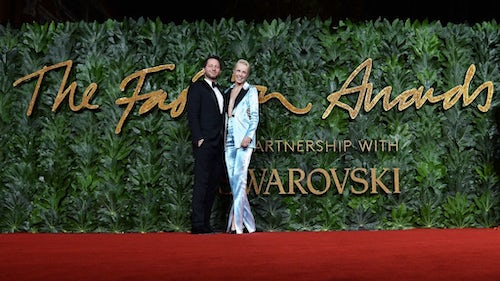 When I was starting out, no assignment was too small: I said yes to writing press releases, blog entries, stories for the magazines they give away for free in the lobbies of buildings on the Upper East Side.

In 2004, the year Anna Wintour launched the CFDA/Vogue Fashion Fund, she asked Jonathan Becker to photograph the awards dinner. The photo editor couldn’t find someone to hold Jonathan’s lights for the portraits and at the last minute he was asked if I could quickly throw on a suit and go do it. Could I? Happy to be here, easy to work with. Jack McCollough and Lazaro Hernandez from Proenza Schouler won that night — they brought Parker Posey as their date — and after I finished holding those lights, we all went to a bar called Sway and celebrated. Those two dudes are still two of my best friends.

How much effort do you put into building relationships in the fashion world?

The answer is: a lot. I cannot go to sleep at night if I haven’t gone through my inbox and replied, filed or deleted every single email I received that day. I look at Instagram twice a day — when I wake up and when I go to bed — and I keep scrolling back until I get to where I stopped when I looked at it the time before.

If I say I’ll be somewhere, I show up. I never flake. (I also had perfect attendance from kindergarten through high school, so I'm used to never missing anything.) Does all of this require effort? Of course. But, as my mom told me when I was young, “nothing good is easy and nothing easy is good.”

What are the specific challenges and opportunities in fashion?

Specific challenges would be finding time to do everything you’re supposed to do; making sure you’re presenting your best self both in person and online; being outgoing but not annoying. A few months ago, a friend of mine sent me a resume of a friend’s kid because I was hiring at YouTube. The first thing I did was look at that person’s social networks and I was actually kind of shocked. Their Twitter was full of cuss words; an Instagram full of gratuitous selfies and questionable pictures. I thought to myself, “On what planet would I want to spend time with someone like this?”

If you figure out where and how to create your niche, you’ll never be bored.

Opportunities would be that fashion is a dynamic world of creative geniuses. If you figure out where and how to create your niche, you’ll never be bored! I love my job and the people I’m fortunate enough to work with and call my friends and family.

What’s the worst thing anyone can do in an attempt to grow or utilise their network?

For me, every time you say “network” I think of “friendship” because for the most part, the same rules apply. I don’t like people who are late, don’t tell the truth, don’t do good work, all of that kind of stuff. I’m repelled by people who act overly familiar, don’t know the difference between humour and cruelty. No one wants to work with people they don’t want to be around.

How important have interpersonal skills been to your success, and are there specific moments you could speak to?

The truth is that fashion is a full-time job. Earlier this month, on the first night of New York Fashion Week, I went to a half dozen events. Gucci had an event at their book store in Soho to celebrate a documentary on gender fluidity that they are distributing exclusively on their YouTube channel. Down the street, Michael Kors was launching his new campaign with Bella Hadid, so I popped in there to say hi to both of them. A few blocks way, Alexander Wang, who I met when I was an intern at Vogue, was doing a Chinese New Year party at his shop on Grand Street and I popped into see him.

After that, I hopped in a car to the Lower East Side to see Billie Eilish, one of my favourite YouTube creators, perform at the Garage magazine party. She did four songs and I posted up by the door so when she finished, I could be the first person out of there. From there, I dashed over to Balthazar to meet someone who is about to launch their YouTube channel. When that dinner wrapped up, I headed to my last stop: ZZ’s Clam Bar to see Billie and Takashi Murakami, who art directed Billie’s photographs in Garage magazine, where I also have a column.

My night started at 6:30pm and I was home before 11pm and it was bang bang bang the entire time: I didn't even stop to have a single drink. But, by the end of the night, I had put in quality time with the host of every single one of those parties. Why? Because I wanted them to know that I was happy to be here and easy to work with.