Pamela Love Says You Have to Spend Money to Make Money

NEW YORK, United States — For the past three years Brooklyn-born jewellery designer Pamela Love has set about crafting her business in the same way she shapes the hand-hewn gothic accessories she sells.

“Just like I learn new techniques for making jewellery as I go along,” she says, “I learn more and more about how to run a business. In the beginning I didn’t know anything, and every season I am like, ‘oh, right, I should have insurance, my employees should be on payroll.’ Every season we’ve become more and more of a proper business.”

Alongside her Autumn 2010 collection — always supplemented by a trans-seasonal “classic collection” of signature pieces the designer maintains and updates regularly — Love has recently done a series of collaborations, creating a limited edition Mammoth cuff with Black Sheep & Prodigal Sons and a line inspired by the Spike Jonze film Where the Wild Things Are with Opening Ceremony, as well as re-teaming with frequent co-conspirator Frank Tell on accents for his Autumn/Winter 2010 line. Ms. Love is ambitious, hoping to lead her brand into housewares, wallpaper, handbags and shoe design. But her talent took flight when the former New York University film student trained it on her first love: jewellery.

While working as an assistant to painter Francesco Clemente and styling fashion shoots, Love found herself drawn to on her symbol-laden metal- and crystal-work. “I just stopped spending my time on other things,” she says. “I was trying to learn as much as I could. I didn’t study jewellery design in school so I had to apprentice and learn through experimentation. Once I had a product that was saleable, it was very organic. It wasn’t like, ‘oh, I have a business plan and I have this much money to invest.’ It was more like, ‘I made this stuff, now let me try to sell it.’ And I did.” 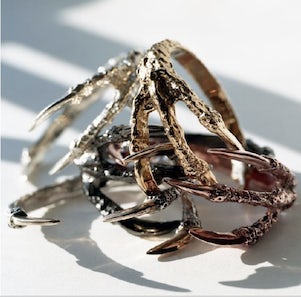 Colette carried her first collection. Opening Ceremony — whose showroom now also handles all the brand’s sales — carried her second. Now her work can be found at retailers in over 30 cities worldwide, including big names like Browns, Bergdorf’s, Bendel’s, Barney’s, and Fred Segal. But her PR program — if you can call it that — was entirely organic.

“I happened to be a stylist — not a very established one, but I knew some people, and they were wearing the jewellery. I knew models who wore the jewellery to shoots and stylists asked them to keep the jewellery on [for the shoots] and a couple of friends of mine who were editors were like, ‘well, let’s write some stories about it.’”

Requests came in to carry the product before the line was even properly established, putting Love in an enviable position. “My philosophy was to never chase after anybody and let everybody come to you,” she says. “I feel like you are going to get more support and love from people who reach out to you and really want to work with you."

But even if well-positioned contacts had proved fortuitous in placing the pieces in editorials and, ultimately, in storefronts, Love says her early work as a stylist helped little to prepare her for the reality of establishing a viable business. “When you start a business your mind changes, your way of thinking about money and scheduling changes.”

But it’s by keeping her business as intimate and unique as one of her eagle talon cuffs that Love — who currently does not have  outside investment — has found her way. As she describes it, keeping it tight is the key. “We don’t produce anything in factories in Asia. Because of that our production is a little slower and more expensive. For that reason we don’t really sit on stock. When a store places an order, that is usually when we go into production. As we’ve grown we’ve learned, ok, these are really popular, maybe we should make a certain amount of extra in addition to our orders.”

So what’s the hardest lesson Love has had to learn along the way? “The idea that you have to spend money to make money. The idea that you have to hire more people, get a bigger office space, shell out money for a website was so difficult for me. For a really long time I was kind of hoarding what I had for the jewellery, but you have to realise that it’s all related — if I spend a bunch of money on my website, it’s worth it.”

Looking back, as orders continue to pile in, Love has some good advice for aspiring jewellery designers on the make. “Know as much as you can,” she says. “Be able to make everything yourself before you start mass producing something or sending it out for someone else to make. I think you have a much greater appreciation for and understanding of something if you’ve made it with your hands.”

Chris Wallace is an editor and writer based in New York. His work has appeared in Dossier Journal, i-D, Interview and T.