How Happy Is the Fashion Industry?

How Happy Is the Fashion Industry?

LONDON, United Kingdom — As the saying goes, the fashion industry is built on the stuff of dreams. Cliché or truism, every single year the opportunity for creativity and innovative entrepreneurialism, jet set locations, glamorous clothes and the Instagram-allure of parties with a globe-trotting beau monde, tempt tens of thousands of individuals to follow their heart and seek a career in fashion they believe will fulfil them.

But beyond the fantasy, in the wake of the #metoo movement, the brutal reality of working in an industry infamous for dysfunctional and, at times, dangerous working environments, poor wages and punishing hours is more apparent than ever before. But how can aspirants and those already working in the industry reconcile such diametrically opposed accounts?

To discover how satisfied professionals working within the fashion industry are with their jobs, BoF surveyed over 1400 fashion professionals and further analysed a sample set of 418 respondents — working in the UK, the US, France, Italy and Germany. 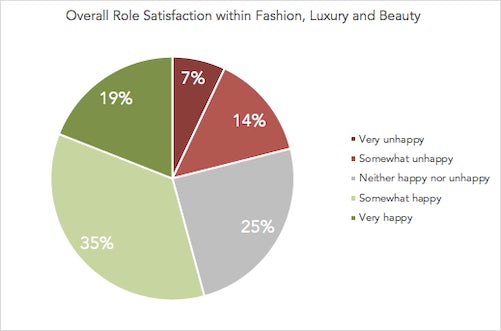 Given the UK’s bleak economic outlook under the cloud of Brexit uncertainty (which forecasts estimate dragged the economy down from around 1 to 2 per cent, or £20bn a year to £40bn a year, according to the Financial Times), it is perhaps surprising that professionals in the United Kingdom are the most satisfied with their roles out of the five geographies further analysed. With 57 percent of respondents satisfied or very satisfied, the UK narrowly beat out the Italian and French industries, who scored satisfaction rates of 56 and 55 percent respectively. Seemingly, London continues its tradition of flourishing in crisis.

On the other side of spectrum, again surprisingly given how robust its economy has been, analysing the data through a geographic lens identifies fashion professionals in Germany as the least happy among those surveyed.

According to the survey, fashion professionals in the United States have the most polarised working experience, with 51 percent satisfied and 30 percent unsatisfied in their roles. In terms of job satisfaction in fashion, the land of the free and the home of the brave is divided between the haves and have nots. Indeed, despite having the highest dissatisfaction rating in the survey, American entrepreneurs and business owners scored the highest satisfaction rating of any demographic cohort. 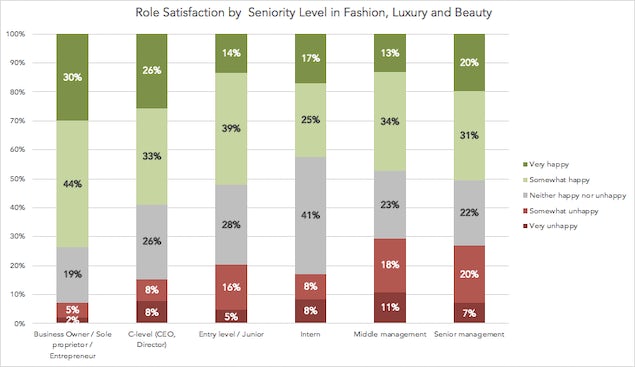 When you cut the data by level of seniority, some interesting trends become apparent in the data. Those at the start and zenith of their careers are notably happier at work. At the top, over 74 percent of entrepreneurs and business owners would classify themselves as satisfied with their roles, with just 2 percent stating they were very unsatisfied with their jobs. Similarly, 59 percent of chief executives described themselves as satisfied or very satisfied (over a quarter scored themselves the highest satisfaction rating possible).

Interestingly, despite accepted wisdom that individuals at the beginning of the career ladder suffer the most in fashion, the results of the survey indicate that middle and senior management find their employment significantly less satisfying than their juniors. Respectively, 29 percent and 27 percent of middle management and senior manager respondents stated they were unsatisfied with their current role, compared to just 16 percent of interns.

For those looking for the most nurturing and fulfilling environments to begin their careers in fashion, the rising spectre of Brexit may complicate matters. The industry’s happiest interns are those working in the United Kingdom, while France’s entry-level and junior professionals are the most satisfied globally.