How I Became… Chief Merchandising Officer at Goop

After over a decade working at LVMH, Blair Lawson now leads the merchandising for Gwyneth Paltrow’s commerce and content business. Here, she shares her career advice.

Want the best merchandising job opportunities in fashion delivered to your inbox first? Click here to set up a job alert on BoF.

LOS ANGELES, United States — It was “on a hunch” that Blair Lawson decided to pursue a career in fashion, drawn to the creative career path while studying at business school. Having begun her career in finance, she undertook a summer internship at Kate Spade where Lawson fell for the industry and, navigating the stereotype of another “ex-finance person trying to get into fashion,” landed a PR role at LVMH. 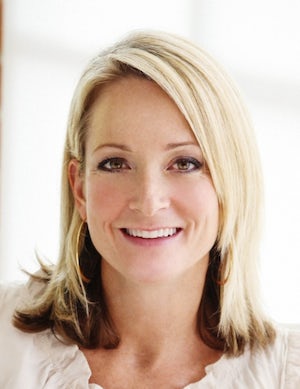 After more than ten years working at various brands and positions within LVMH, including digital vice president at Louis Vuitton, marketing manager at Dior Watches and PR manager at TAG Heuer, Lawson left the luxury conglomerate and moved to Los Angeles with her family. She soon became immersed in the West coast’s start-up landscape, starting at a clean beauty brand Beautycounter in 2012, valued earlier this year at $400 million. She went on to become the chief merchandising officer at Goop, Gwyneth Paltrow’s lifestyle brand, whose revenue was estimated at $45 million in 2017.

How did you start your career in fashion?

I had my heart set on working for LVMH. They were recruiting on my business school campus and I was lucky enough to get an interview. I said to everyone I met during my interview process that LVMH was where I wanted to work and that I would work in pretty much any capacity, in any division, in any brand — that went a long way for them to know I was committed to that path.

I did a lot of research on the company prior to my interview, but I’ll never forget meeting one guy, who ended up supporting me a lot in my career, and I called it “Give-en-chee,” and he was like “Darling, it’s pronounced Gee-von-shee!” I guess I had done my research but maybe not to the point of knowing how to pronounce every name. The best way to get something you want is to know what it is that you want.

How did working for the conglomerate shape your career?

In fashion, your career path is not always perfectly clear. Everybody’s goes a different way, so there is a level of flexibility on what criteria you have to have. But with that, you have to be willing to try something new, move to a different function or a different division. Also, having the different functional exposure helps you when you’re managing those functions if you’ve actually been able to do it yourself at some point. That functional exposure has been incredibly valuable in getting me to where I am now.

At LVMH, I moved around a lot of roles. I started in the watch and jewellery division in PR, so I learnt about PR. Then I moved to a more general marketing role in Dior, so I learnt about how to support wholesalers from a marketing point of view. Then I made the switch to merchandising within LVMH.

Why did you choose to start the next stage of your career on the West Coast?

I wanted to work for a start-up, for a US company, and to try a different format. When I left LVMH, it was a really hard decision, but I knew that I was ready for something different. I took that leap and it was really scary, but I’ve always trusted my gut and that was what I needed to do.

We moved to Los Angeles without jobs and I spent six months in LA meeting everyone in the fashion industry here. I was introduced to the founder of Beautycounter [Gregg Renfrew], who was looking for someone to help with merchandising. Even though I didn’t have specific beauty experience, I was able to make that transition, and that’s what ultimately brought me to my current role with Goop.

What did you learn from your transition from conglomerate to start-up?

There were definitely times in my career where I felt like ‘Oh where is this all going? Do I really have a clear path for where it is that I’m hoping to end up?’ But I feel now, at Goop, I am overseeing beauty, fashion and home, so all of the work along the way has come full circle and put me in this place.

Be flexible and willing to learn something new all the time. It is really important. One of the things I also always try to bring to the table is how to simplify all of the information that you’re getting, break it down and prioritise it, so that you can communicate with your colleagues, or to your boss, what is important in a precise way, and what is the decision that is to be made, and how it is impacting the business.

How relevant are administrative and operational skills to your hiring process?

When I interview candidates, I don’t try to evaluate whether or not they have the Excel or PowerPoint skills, although people still compliment me on my Excel skills, and I’m proud of it. It makes everything I do more efficient. Any way that you can build those fundamentals, whether it’s by doing a couple of years in investment banking or taking a class or learning them on your own, is incredibly valuable.

What philosophy guides your career decisions?

Throughout all my different roles, what has served me is the core understanding of what I really care about, and what I care about the most as a merchant is the integrity of the product that we put out there. I always go back to “Do I fundamentally believe that this is a great product we’re selling to the customer?”

The reasons I joined LVMH, Beautycounter and Goop are all very similar — they were brands or products or strategies that I really believed in. With Beautycounter, I felt there was integrity behind the brand and its position, and I felt the same way when I met Gwyneth and the team at Goop. The philosophy of the brand has always been really important to me.