How I Became… Global Head of PR at Depop

With a career in communications that includes roles at People’s Revolution, Barneys, Amazon and now resale site Depop, Rebecca Levy-Lewis believes personal values and persistence are ‘the most important aspect in any career decision.’

How I Became… Global Head of PR at Depop

With a career in communications that includes roles at People’s Revolution, Barneys, Amazon and now resale site Depop, Rebecca Levy-Lewis believes personal values and persistence are ‘the most important aspect in any career decision.’

Rebecca Levy-Lewis was in third grade when she decided to work in fashion, watching a CNN report on New York Fashion Week off school one sick day. At first seeking out a career as a designer before realising she was “not the most technically sound,” Levy-Lewis made her way to New York as an art history and visual arts major at Barnard College.

As the daughter of Bill Clinton’s PR representative in Texas, Levy-Lewis was “familiar with the concept of PR” and called up fashion and lifestyle PR agency People’s Revolution for an internship turned assistant job while at university.

Levy-Lewis went on to work for strategic marketing and communications firm HL Group, became senior manager of PR at Barneys and then head of PR at Amazon Fashion, working under former Vogue Head of Communications Megan Salt — all by her mid-20s.

After 2 years, she left Amazon and moved to London with her partner, working freelance with the likes of Drew Elliot at Paper, Amex and Serena Rees at Les Girls Les Boys. Last year, fashion marketplace and resale site Depop hired Levy-Lewis as global head of PR, managing the internal and external communications of a platform with over 26 million users across 147 countries — 90 percent of whom are under the age of 26. 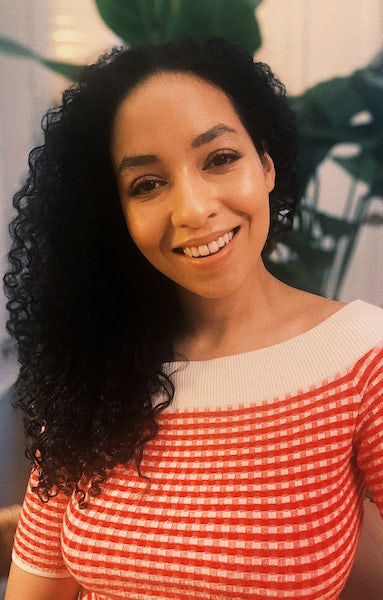 Here, Levy-Lewis shares her career advice, including what she believes is the most essential skill PR professionals possess, the necessary sacrifices she made starting out and why resilience, honesty and transparency are essential for success.

What attracted you to working in fashion?

I have this memory of being home, sick from school, and there was a CNN special on New York Fashion Week. I remember seeing the Anna Sui show and it was that moment of, “I need to be there. I need to be in that moment.” I became a bit obsessed with Anna Sui. I found out where she went to school and ordered a Parson’s catalogue — while in the third grade. We recently did a partnership with Anna Sui and it was like my full circle moment.

A lot of people’s first entry point in fashion is, “I want to be a fashion designer,” and that was certainly mine. But I soon realised that I was not the most technically sound. My mom had always been in PR — she did PR for Bill Clinton in Texas — so I was always familiar with the concept of PR. I had also been a fan of The Hills and The City. I saw these girls doing PR and one of the firms was People’s Revolution, so I called them, took an interview and got the job. I fell in love with it from that point on.

How did you stand out in your first job?

One of the things that made me stand out was the ability to write well. I still think writing is the most important skill a PR person can have. If you can’t write and you can’t craft a narrative, you can’t honestly do PR. It was also really wanting it — really wanting to be a part of this industry and doing everything and anything possible. It was about perseverance and persistence.

It was definitely a splash in the face of cold water, to go from my freshman-year seminars talking about art history to then going into the nitty-gritty of fashion PR in New York. I put school aside and worked four days a week in the People’s Rev’s office. I had to make some sacrifices — I probably have as many friends from university as I can count on my hands — but most of my colleagues became my friends.

What lessons did you learn when starting out?

At the time, the New York PR industry was cut-throat. If you work in any type of company that has a certain reputation, the concept of resilience, honesty and transparency are essential.

I still think writing is the most important skill a PR person can have.

There were times when I really, for lack of a better word, fucked up. Being able to know when to ask for help and say, “Hey, I’ve done something wrong,” was important starting out. One of the biggest lessons I learned is that I don’t know everything, and I certainly did not know much when I was starting out.

Then, finding people and colleagues who can support you on your journey, teach you things along the way and, eventually, become confidants, mentors. A wider network is fundamental for any junior starting out.

What guiding principle led your career moves after graduating?

I felt really confident in PR, but I wanted to know what else there was — to explore the industry. With exposure only to the fashion industry, I moved to luxury book publisher Assouline when I graduated, to expand my skill set. But I missed fashion and I moved back, working at HL Group and learning how to manage clients and accounts with brands like TOMS, Fleur Du Mal, Nine West, A.L.C. and some Lebanese designers.

Then, we had the proliferation of social media happening — bloggers and influencers. What I had known from day one was drastically changing and to be a part of that moment was really interesting, with everything I was taught in my People’s Rev day out the window.

I applied for a job at Barneys, but I didn’t end up staying very long. I valued my time there, with the crème de la crème de la crème, but an opportunity came along at Amazon that I jumped on with the former head of comms at Vogue, Megan Salt. I really wanted to meet her — and that conversation turned into a role.

Why the move into corporate PR?

I never, in a million years, thought I would work for Amazon. The PR team is led by Jay Carney, former White House Press Secretary to Obama, so the leadership was incredible. It was like a mini MBA in many respects, which gave me a lot of insight into a broader industry. But it was also quite a difficult job and I never took a second to think, “What do I want?” I was in my mid-20s, so I took an opportunity to take a step back and think about what I wanted.

I was looking to move to London with my now-husband. I was trying to formulate connections in the UK, but I also took some much-needed time off and did something for my personal life. Then, this opportunity with Depop came along.

And why the move away from it?

Early in my career, all I was doing was telling people what to buy, who to buy, what season to buy, what product was the best. But I thought, “is that really what I want to continue to do? Is this rampant and rapid consumption going to be the future?” Depop, as a tech platform, really built on what I was trying to chip at while at Amazon.

How can you effectively guide companies when you don’t have that diversity within your comms team?

I’ve been at Depop for a year, setting up the PR team, building what we want to be known for as a PR team, and being closer to the brand and what we want to say. It’s not about getting coverage. It’s about making sure you are helping guide the company in the right way, so listening and not just doing.

I think there’s a common misconception of what PR does. We’re not just this team that goes out and wines and dines editors, and we are not just coverage generators — we are intermediary and strategic counsel to the rest of the business.

We have to know exactly how every single executive speaks to help them present themselves to the rest of the world. We have to make sure that all of our initiatives are as clear and concise to the brand and to the business. We also need to make sure we’re future-proofing ourselves, working closely with partners on sustainability and diversity, equity and inclusion.

What is the most challenging aspect of your role?

I think the day-to-day challenge is the pace. One day you’re hit with an issue, and you have to put everything to the side and do that. It’s sometimes difficult to multitask and also be that strategic counsel, when your job is split in terms of making sure the house is safe but also in order.

How do you believe PR as a career will change following the events of 2020?

I believe internal communications has become more important than ever. Throughout Covid-19, you do not only have a responsibility to uphold the reputation of the business to the press, but you’re making sure you’re doing that for employees. Making sure that internally, employees aren’t just informed but also advocates, that they believe in what you’re doing.

We are intermediary and strategic counsel to the rest of the business.

Internal communications wasn’t the first thing on my agenda when I started at Depop, but it’s the first thing in the new year. We need to set some principles so, even if there’s a pandemic happening or there are protests in the streets, you are consistent to build loyalty internally and externally.

How can PR as an industry evolve and learn from the social justice movements?

At Depop, it’s the first time I’ve ever worked on a PR team where I wasn’t the only person of colour — and that’s a problem. We need to all take accountability as comms leaders to make sure that we’re not just making sure our teams are in order, but the agencies that we’re hiring are also considering it a massive priority.

What core skills do you need to work in PR today?

Don’t be narrow in terms of your research and learning. Don’t always read fashion magazines and publications — there’s so much to learn from consumers, from tech. You should be trying to be the most well-rounded person as possible.

Even when it comes to finding your coaches and mentors, don’t find the most obvious choice. Find someone who’s going to take you to that next level because it will surprise you, in terms of what you learn. The mentors I have come from a range of backgrounds, to make sure I am not taking the most obvious next step. So, from research to building your network — make sure to diversify it.

What do you believe is essential for being successful in the fashion industry?

This sounds cheesy, but you really have to follow what you believe in and you have to listen to your values. The expectations you have for yourself, you have to maintain them throughout your career, otherwise you’ll end up wanting to leave.

There aren’t many industries that are this dynamic and rich. From my breadth of experience, I’ve learnt so much about business, about branding, about myself. Without my internal North Star, I probably wouldn’t be where I am today. I think people have to remember that your values are the most important aspect in any career decision, and how you interpret those and the persistence that you have with them is equally as important.