How I Became… Hermès' In-House Perfumer

As the 'nose' of Hermès and one of the most revered perfumers in the world, Christine Nagel has built her career on technical ability and a willingness to take creative risks. Here, she shares her career advice and insights on the inner workings of the scent industry.

How I Became… Hermès' In-House Perfumer

As the 'nose' of Hermès and one of the most revered perfumers in the world, Christine Nagel has built her career on technical ability and a willingness to take creative risks. Here, she shares her career advice and insights on the inner workings of the scent industry.

PANTIN, France —  After obtaining a degree in organic chemistry, Swiss-born Christine Nagel began her career in a research lab at fragrance and flavour firm Firmenich. It was there, through the windows of her laboratory, that she first witnessed a "nose" at work. The sight captivated her immediately, and she knew "this was the career for me." At the time, however, a career in perfumery was the almost exclusive preserve of French men, preferably hailing from Grasse — the traditional capital of the scent industry itself — and Nagel's application for training was refused. Instead, she was offered a job identifying scents rather than creating them — using only her nose to decipher the exact olfactory formulas within fragrances for over 8 years.

Later, undeterred, now highly skilled and willing to take a risk to find opportunity, Nagel looked to Italy, where she won 60 percent of the contracts available in the market. As demand for Nagel’s expertise increased, she moved to Paris to work for major names including Cartier, Dior and Thierry Mugler, among others.

In 2016, Nagel became the in-house nose for Hermès, succeeding the house’s first resident perfumer, Jean-Claude Ellena. She moved with her assistant of 15 years to an atelier in Pantin, in the northern suburbs of Paris — the long-time home of the luxury leather house, whose annual sales reached north of €5.9 billion in 2018. 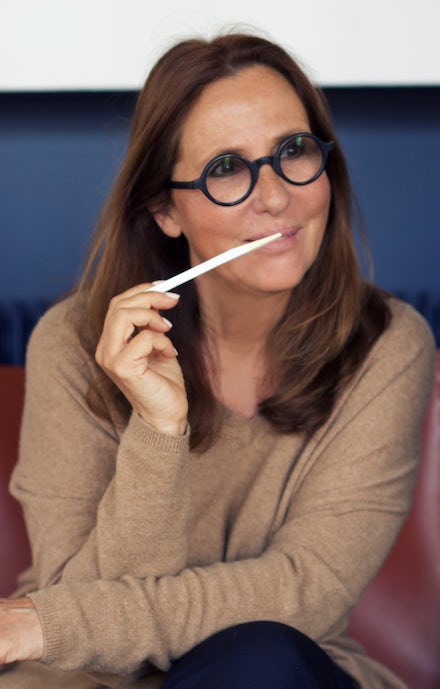 How did your career as a perfumer begin?

I was working in a research lab at the Swiss flavour and fragrance firm, Firmenich. A month after I arrived, through the windows across from the laboratory I was a working in, I saw a man putting perfume on the hands of a woman. She smelt her hand and had this smile on her face — even after the perfumer left — and it was in that moment I decided, this is the job for me.

The man was Alberto Morillas, a world-famous perfumer, and I asked him if I could join the perfumer school in Firmenich. The response from the school was a no — in fact, it was a categoric no — the first reason being that I am a woman because, in the past, perfumery was a man’s job — which is ironic because in France, it is now almost only women studying to work in perfume. The second reason was because I don’t come from Grasse (a region in southern France and the historical capital of the fragrance industry), which to me was very unfair.

The firm instead suggested another job — a more technical job, which was to smell perfumes and identify specific scents, which enables you to retrieve the formula used. Today, we have a lot of help with machines to track scent, but in the past, I would find the formula only with my nose. I am very proud of my background because it means I am never afraid of a challenge, and today, there are just two or three perfumers in the world with the same background as me.

There are fewer of us than astronauts.

How did you build your career from your first job to become an in-house perfumer?

To be an in-house perfumer, you need to have a lot of prior experience. I love to take risks and I decided I would visit some clients in Italy after working at Firmenich. I won a lot of projects there, which was when I felt like I had become a real perfumer. After Italy, lots of people were asking me to work for them, so I went to Paris — the home of perfumery — and it allowed me to expand my partners.

In the world, there are maybe 500 or less perfumers — there are fewer of us than astronauts — so it’s always a competition of sorts. I actually believe there are just six perfumers working in-house. Each time you have a project, you dive into a special story with the creative director. It’s like when your mother reads a book to you as a child. If it’s a story about monsters, you become a monster. If it’s a fairytale story, you become a part of that fairytale. Each story is utterly fantastic. I’m very receptive to this; it’s part of my history. It has shaped me and my story.

What skills are essential to work as a perfumer?

This job requires work and discipline. To be a good perfumer, it’s important to have two assets. One is the technical ability; the second is the creativity. If you don’t have creativity, you can be a good perfumer, but you will never truly triumph. You cannot create emotion without it. If you’re only creative without the technical ability, your perfume will probably also not be good. You must have balance.

I do not have the perfect recipe for making a good perfume, but I have experience, which is like a fairy godmother looking over me.

When I arrived at Hermès, [chief executive] Axel Dumas said to me, “Christine, continue to have audacity, because without audacity, there is no creativity.” This sentence is still incredible to me. It’s OK to be wrong, and I would prefer to be wrong having been audacious than not be audacious and be right. Axel’s confidence in me helped me a lot. I do not have the perfect recipe for making a good perfume, but I have experience, which is like a fairy godmother looking over me while I work.

How is your current role different to your previous positions?

At Hermès, there’s an important marriage between the craftsmanship and the artist. Today, I’m one of the few perfumers in the world that is actually able to do the real job of a perfumer because I have no boundaries — and that’s because Hermès trusts me with my creation. When I create a perfume, I work with amazing ingredients and I don’t have any time limitations.

Hermès has never once organised a market test to decide the choice of the perfume — that is between Pierre Alexis Dumas, the artistic director of Hermès, and Agnès de Villers, the president of Hermès Parfums, and sometimes, we work with deputy creative director for women's, Bali Barret, and [men’s artistic director] Véronique Nichanian. When I create a perfume and I have an emotional reaction to it, that is the moment I present it to Pierre Alexis and Agnès. I have no time limitations in which to work, which is an incredible luxury.

Un Jardin sur la Lagune [Nagel's latest scent, released in March] took 18 months to create. We had decided that we wanted an English garden, but I could not find the right garden. Then I saw the story of Mr. Eden, an Englishman who once owned a garden in Venice, naturally called the Garden of Eden. Today, the garden remains private and nobody [is allowed] in. I just knew it was the right garden, so I wrote personally, a number of times, and eventually received admittance. I visited the garden to smell it three times within a single year, and of course each time, I discovered different perspectives and moments. I decided to put all the life of the garden into my perfume: the magnolia, the salty air, the tree roots — everything, balanced.

How involved are you in taking a fragrance to market?

I’m the nose for Hermès, I’m not the eyes. I am not the ears. But every month, I have a creative meeting with Pierre Alexis and we discuss the bottle, the name or advertising. I don’t decide on these areas, but they ask my opinion, which is very unique. For example, when the perfume Galop d'Hermès was born — a careful balance of leather and rose scents — I presented it to Pierre Alexis and we discussed the bottle, which is in the style of a stirrup dating back to Hermès’ first shop outside France, in New York in 1929.

I’m one of the few perfumers in the world that is actually able to do the real job of a perfumer because I have no boundaries.

After two months of development, we were told it was impossible to have this bottle because it was too expensive, but Pierre Alexis refused to compromise on the aesthetic.

How do you deal with the pressure of the job?

At Hermès, it’s detail obsession. The inside of the clothes have the same quality as the outside of the clothes — and I have the time to put this kind of value into my perfumes. So, if I need six more months, I get six more months. The only pressure I get is from myself — I don’t really get it from the outside because I have time and all the means to succeed. My job is not a job; it is a passion. It is never possible to turn off my nose. When you sleep, you close your eyes. You rest. But my nose is open all the time.

What advice would you give those wanting to work in your field?

Young talent that wants to succeed in a perfumery job should start creating niche perfume, so people can see their talent and true creativity. I recently received an invitation from the French Society of Perfumers to assess 45 samples from young perfumers. I selected only 5 of these samples for the final because, while there might not be a perfect balance of scents or perhaps it’s not the perfect formula, they exhibited creativity. The other 40 were too commercial, perhaps because the young are afraid.

The technical ability arrives with time, but the creativity is either within you or it’s not. Do not be afraid to dare. I hope next time, others will take more of a risk because what I wish most for young perfumers today is that they be audacious in their creativity.

Editor's Note: This article was revised on 25 March, 2019. A previous version of this article misstated that it was women’s artistic director Nadège Vanhee-Cybulski that collaborated with Christine Nagel. This is incorrect. It was deputy creative director for women's, Bali Barret.