How I Became… Men’s Fashion Director at Bloomingdale’s

Having started his career in fashion editorial, Justin Berkowitz landed his first retail job three years ago — as the men’s fashion director at Bloomingdale’s. Here he shares his career advice.

NEW YORK, United States — Justin Berkowitz graduated from Columbia University with a BA in art history in 2008. He began his career in fashion editorial, starting as a fashion assistant at Teen Vogue which led to more senior roles at Marie Claire and Details Magazine. In 2015, Berkowitz transitioned to retail — becoming the men’s fashion director at Bloomingdale’s. In his new role at Bloomingdale’s, Berkowitz is responsible for menswear in 38 stores across the US, 16 outlet locations and Bloomingdale’s online business. In 2017, the department store reported annual revenues in excess of $1 billion.

What does the title fashion director mean today?

For me, the most important function of a fashion director today is telling a story and then choosing which story goes to the right place. It’s about 360 storytelling. In the past, a fashion director might have only had to think about a catalogue or the windows or in-store presentation. Those are all still very important, but certain elements have changed. Of course, we have store windows and mannequin displays, but we also have to consider the website, emails to the customer and social media.

What does your job role entail?

The calendar I work to is season based, so before shows and markets happen, we put together a general idea of what we think is going to happen. You put together a brief outline for your buying team and merchandising team, you go to market, you do the buys, and hopefully, some of the things you thought were going to be big are big.

From that buy, we start putting together how we’re going to market it to our customers, so I transition from buying season to storytelling season. Working with our creative teams internally is about half of what I do, and that includes briefing them on ‘trends X, Y and Z.’ Then, every season, you start over again. 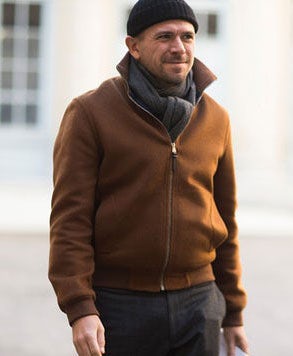 How did your fashion career start?

When I was in school, I started interning for a lot of different companies. My first was at Paper Magazine where I worked with the advertising team and on the editorial team with Mickey Boardman. It gave me the experience to get a foot in both worlds.

I went to Columbia University, which didn’t offer fashion education courses, so I studied art history instead. It taught me to really talk about things that I see; to articulate the energy or the feel that it gives off. However, I had the unfortunate circumstance of graduating in 2008. It was a very difficult time in the fashion world, with the economy and the markets crashing. So after I left Paper, I ended up interning at Harper’s Bazaar for a year and a half, where I worked under Kristina O’Neill. They hired me as a freelancer after I graduated, kept me around for a few months so I could find a role that was right for me. I happened to be sitting next to an editor there who had a friend at Teen Vogue looking for an assistant and that led to my first job.

What is really appreciated at a junior level is showing a desire to work. More than anything, my desire to do a good job, to feel satisfied with my work, allowed me to maintain the working relationships that I have. That level of effort does not go unnoticed and can lead to more and different responsibilities, which will eventually lead to career growth.

What did your editorial career teach you?

It gave me an appreciation for the craft. The bigger story is the designer as a maker, not the branding. For example, when I was at Details, Kim Jones would give a presentation about his collections [at Louis Vuitton], explaining the processes that go into, say, making a leather piece — why he had crafted that particular object, or why he had used that particular leather. Having the opportunity to talk to the designer about what they’re thinking, what they’re doing and how they are doing it, is incredibly informational and important. It guides me when we’re looking for new brands. It is the art side of what we do, as opposed to the commerce side, which speaks a lot to my background in art history.

What do you believe is essential to being successful in the fashion industry?

A hunger for more is essential, and that can translate in many different ways. A part of it is a hunger for more in the workplace, so it’s really important to never say ‘I don’t do that’ or ‘I can’t do that.’ A lot of people have an understanding of what their job description is and won’t do a task because it’s not in their wheel house. But showing a desire to want to do more will help you stand out.

A great thing about the fashion world, whether it’s men’s or women’s, is that it is constantly changing and there is always something to learn. So that hunger can also mean a hunger for education — finding the undiscovered designer or the person who does something I have never seen before — which is really important and what keeps you excited. It keeps me excited, at least.