PARIS, France — French-born and Rwanda-raised Fanny Bourdette-Donon grew up in a “pre-cell phone, pre-Internet era,” far removed from the fashion capitals of the world. But after she moved to France for college in the early 2000s, studying law in Nice to appease her father, Bourdette-Donon discovered the potential for a career in fashion and relocated to Los Angeles in pursuit of the profession.

While studying a BA in California at Fashion Institute of Design & Merchandising, Bourdette-Donon began working at denim brand Guilty Brotherhood, moving to New York with the company four years later. After the brand shut down following the economic crisis in 2008, Bourdette-Donon worked backstage at New York Fashion Week for Maybelline before meeting Jérôme Pulis, Dior Beauty’s international communications director, at a dinner in 2012. He offered her a job the next day. 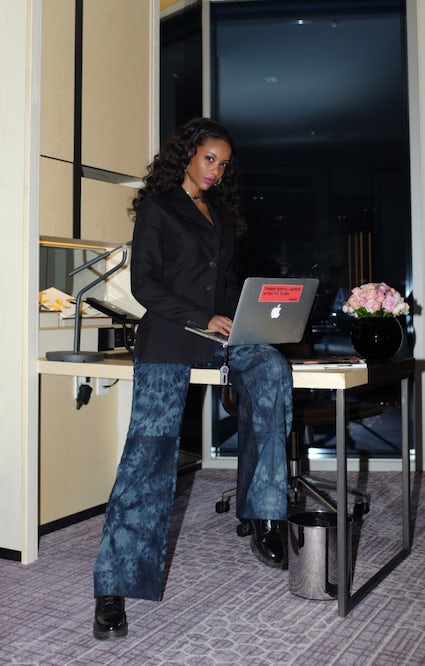 I grew up in Africa, travelling a lot as my dad was a diplomat. We moved every three years. I didn’t have access to the Internet, to magazines, or a movie theatre — I’m talking pre-cell phones, pre-Internet era. I felt like I was living very far [away], which was great growing up, but I was really uniformed.

When I moved to France for college, I didn’t know what I wanted to do. I didn’t even know fashion was a job. With a diplomat dad, I didn’t have many options. It was either law school or med school, so I picked law school. But in France, I realised that fashion was an entire industry, and I knew this was what I really wanted to do.

After I finished law school, I moved to LA where I went to the Fashion Institute of Design & Merchandising to study a BA in marketing and merchandising. On the side, I was working for the denim company Guilty Brotherhood and that’s where I got most of my knowledge. I was managing projects, casting, doing PR, talking to stores — I learnt everything working with them.

What were some of the mistakes you made when starting out in fashion?

When I started, I didn’t have a plan in the long term. I was taking it day by day, which was great as everyday it felt like something new was going to happen. But I feel it’s important to know where you want to go. That was what I was missing.

I also moved to New York with Guilty Brotherhood after four years in LA, as they wanted to rebrand to be more high-fashion. But I was so involved in the whole process and I got really emotionally attached to the company.

During the economic crisis, Guilty Brotherhood had to shut down. It was heartbreaking because I loved what I was doing. I was really close to the designer too — we had a complementary vision of what the brand was going to be, so when it stopped, it was really hard on me.

What did you learn from these mistakes?

I feel it’s important to be dedicated to what you do, but you also need to have boundaries. If you’re passionate, this industry can take over your life and it’s important to know how to separate things; 'this is my personal life, this is my professional life.' It makes you happier.

A lot of girls and boys that follow me on social media just see the glamorous part of my job. They don’t see the struggle.

It’s essential to take breaks, especially with the amount of information you get on a day-to-day basis. [When we’re] constantly on a screen, I feel it’s important to be able to escape to be creative again. When you’re always in the same circle, talking to the same people, nothing new comes out of it. I take trips to see different cultures, to meet new people. It’s hard to do, but you can see how much more productive you are.

How did you transition from working in fashion to beauty?

I’ve always looked at beauty as an essential element to convey the whole idea of a look or collection. I was working closely with makeup artists and hair stylists [at Guilty Brotherhood] and when the company stopped, one of the makeup artists I knew at Maybelline said, “Why don’t you come and work in the shows?”

Maybelline [is one of] the official sponsors of New York Fashion Week, so I was doing the makeup tests with designers before the shows, overseeing the press coming backstage, making sure that the products Maybelline wanted to highlight were used.

I ended up at a dinner [sat] next to my current boss [Jérôme Pulis], and we immediately clicked. The next day, he called me and asked if I would move to Paris to work for Dior. Three months later, I was living in Paris. I moved for the company, but also for the people. [Who] I work with is crucial to how I pick my jobs. I need to be able to admire the people that I work with and [Pulis] was one of the biggest reasons for me to move to Paris.

I don’t have a day-to-day; it depends on the projects that I’m working on and what the priorities of the house are. For example, right now, we’re launching a lipstick. They give me priority markets, and we discuss what would be the best way to launch it and who we would like to collaborate with, based on the market, on the city, the timing, the face, and what’s going on in the culture at the moment.

We are in such an interesting time in fashion and beauty right now. Representation is crucial for me and it’s something that I put a lot of work into. In the talents that I pick, and behind the scenes, it’s really important for me that it has diversity.

In the talents that I pick, and behind the scenes, it’s really important for me that it has diversity.

As an industry dominated by men, I think it’s also important to make sure that most of the talents are women. If there is an amazing woman photographer, why is she not a part of it? And we bring her in. That’s the most exciting part of my job right now, I believe we are able to make a difference and I am fortunate my company listens to me.

What advice would you give people of colour who want to be in your position?

Let’s face it, it’s hard. It’s different depending on the country and the city you’re working in, I feel, but it’s the reality of things, and people who tell you differently are either lying or not paying attention.

It’s challenging but it’s obviously not impossible, because I’m doing it. My advice is to work extra hard — harder than anybody else. I’m usually the first one to arrive at the office and the last one to leave. I would also recommend being curious and aware. Know what’s going on in the world and in our industry, read the news, and keep up with emerging talents.

I try daily to make a difference through my actions — by the talents we collaborate with and the people I’m trying to link to the brand.

Are there any particular philosophies you work by?

We’re all human. I don’t believe in working in terror. I will never take advantage of people and when you work with me, you know you’re going to look fantastic. It’s always fun and a collaborative effort in order to put the best work out there that we’re all going to be proud of. That’s my motto in life.

I’m really proud of what I’ve accomplished and everything we are able to do today with coloured women and diversity. That’s my biggest pride and I want to keep on fighting towards this. But there is a downside to it. A lot of younger girls and boys that follow me on social media just see the glamorous part of my job. They don’t see the struggle. I love my job and I feel really lucky, but I miss my friends a lot. [There are] a lot of sacrifices.

First of all, try to anticipate what is needed of you, what [people] are expecting out of you and what the consequences might be of those actions — and hard work really. When I started, I was the most hardworking. I was so passionate and striving to learn. No matter what needed to be done, I would do it.

Sometimes, when I work with younger people today, I feel like they feel entitled. Yes, social media is amazing but don’t think that your number of followers is going to help you have a career. It’s not the case. I cherish my interns, but I had to explain to some of them, “That’s Instagram and that’s real life.” I’m in a studio all day, on the floor, and [if] I’m on the floor packing boxes, you can do it too. Don’t give me an attitude when I ask you to send for a messenger. Don’t be entitled. Work hard and anticipate and educate yourself. Talk to people. Be interested. When I work with people that are feeding me [ideas], I just love having them around.