Clare Press carved out a space as sustainability editor as the world began waking up to the climate crisis. Now, she urges those starting in fashion to ‘be bold and forget what’s gone before.’

Clare Press carved out a space as sustainability editor as the world began waking up to the climate crisis. Now, she urges those starting in fashion to ‘be bold and forget what’s gone before.’

After Clare Press talked her way into a senior writing job at Rolling Stone aged 23, she developed her beat into fashion at the popular culture magazine. From these “fashion-skewed assignments,” she went on to write for Harper’s Bazaar Australia, reporting to Laura Brown, and then Australian Vogue as features director at the age of 27.

Press spent five years at Australian Vogue before she published her first book The Dressing Table; became The Monthly's first fashion critic; and wrote the columns Ask Mrs Press and Style Matters for InStyle. She has also been published by titles including Vogue, Elle, Marie Claire, Nylon, Sydney Morning Herald and Guardian Australia.

Unwilling to write “another headline about florals for Spring,” the journalist and author looked to combine her interest in the environment and politics with fashion years before the climate crisis gripped the planet. She published her second book The Wardrobe Crisis in 2016, from which she launched a podcast of the same name. 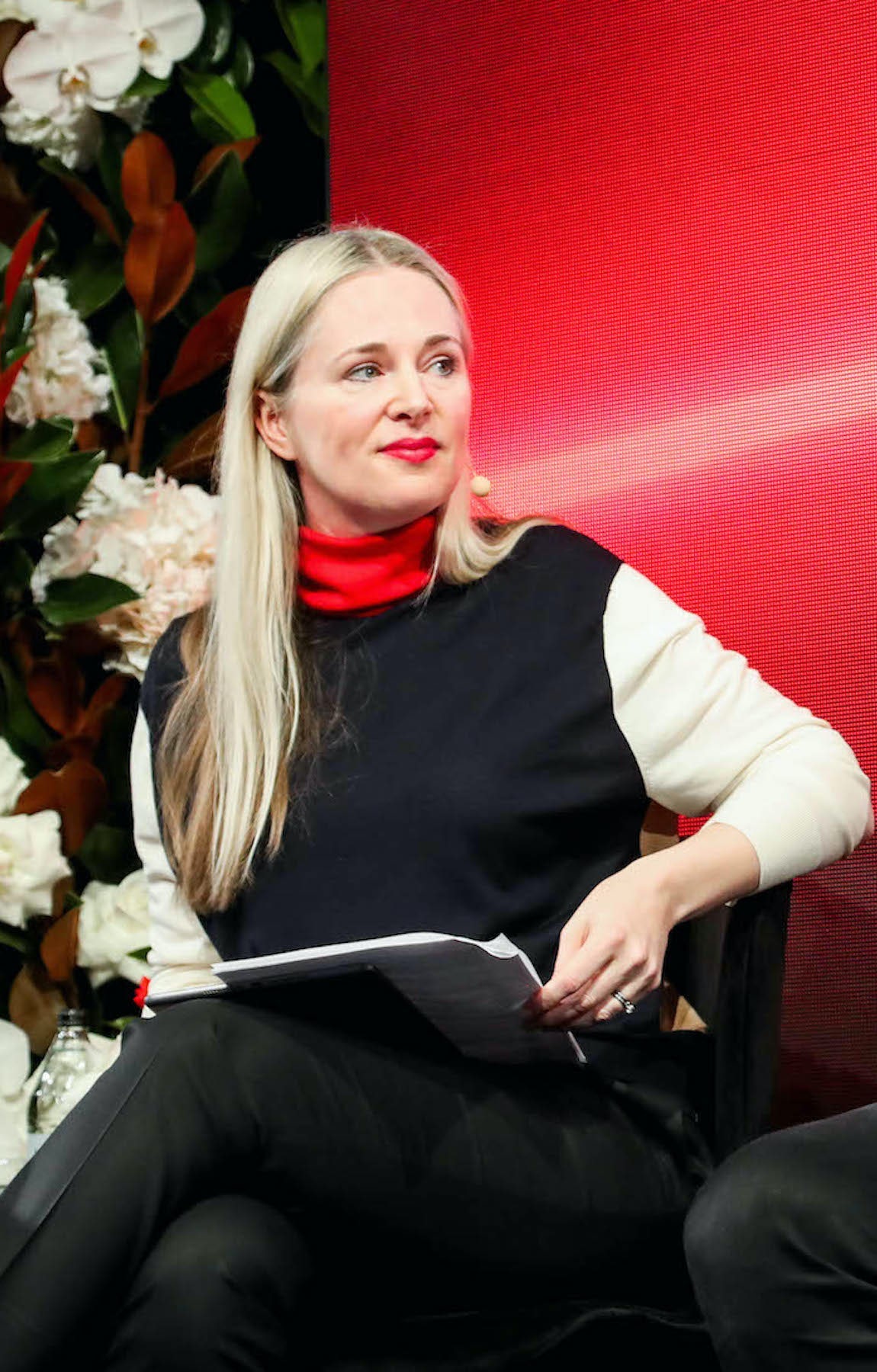 In 2018, Press returned to Vogue to become the international publication's first sustainability editor. That same year, she became the first Global Ambassador for the Ellen MacArthur Foundation's Make Fashion Circular Initiative. Press also sits on Copenhagen Fashion Week's Sustainability Advisory Board and is one of Global Fashion Agenda's Content Experts. Now, she shares her advice for breaking into sustainability.

How did your career in journalism begin?

I moved to Australia and talked my way into a job at Rolling Stone, where they made me a senior writer. I did some great assignments — I interviewed Tom Waits, Nick Cave and all these rock legends — and because I was the young woman on the team and interested in it, I was always given these fashion-skewed assignments. It became something of my beat.

After that, I moved into fashion magazines. I worked for Laura Brown when she was features editor of Australian Harper's Bazaar before I became the features director of Australian Vogue when I was 27. I did the conventional things that fashion journalists do — I interviewed fascinating designers, reported on shows, wrote about trends and tried to contextualise them in the zeitgeist of the moment.

I only started to find true purpose when I began working in sustainability. I always had this fascination with the environment and politics but wasn't able to bring those two things together until about six years ago. No one else was really doing it, so I was like making it up as I went along. Then, two years ago, I was made the first Vogue sustainability editor.

What qualities initially drove your success?

When you're starting out, you have to demonstrate that you're up to it and that you really care. I understand people want to rise to the top as fast as they can, but hard work is what drives success. I am always willing to put the hours in so if I have an intern or mentoring a young writer, I'm looking for the voice and ideas, but also whether you will work your ass off.

Hard work is what drives success. I am always willing to put the hours in.

When you're a junior trying to make a name for yourself, hard work and dedication sets you apart — especially in sustainability because of the amount of research you’ve got to do to stay on top of the topic. Then, it’s about being positive, kind and compassionate. Those are the qualities that those who have the power to pull you up the ladder look for. The rest you can learn.

How did you initially handle carving out a new editorial space in fashion?

The main driver for me, getting into this space, was the search for reporting on something that actually mattered. I also find the complexity exhilarating and I think anyone who's a journalist is looking to be constantly interested and challenged. I am driven by the fact that it's difficult.

I've been in the fashion world for 20 years. I don't have it in me to write another headline about florals for Spring. The fact that we are talking about this rich, challenging intersection of politics, economics, environment, science, then add the fashion industry and design, is absolutely the point. It’s the conversations I'm having with fascinating people in the space — that makes you want to do it.

We’re at a milestone moment in the arc of fashion history. When we started talking about climate and fashion two years ago, people working within sustainability departments of big brands were looking at carbon footprints and how they would evaluate that. But the discourse around sustainability in the media didn't touch climate until even 2019. Now, seeing 43 brands sign the UN climate charter was phenomenal. We're understanding that sustainability, like diversity, is deeply embedded in the ways in which we view our world.

What challenges do you often face working in sustainability?

People throw very thorny questions at me as if I have all the answers because I'm a sustainability editor. Some say, “What's the timeframe on scaling up recycling tended fibres and when will that happen in this territory?” The complexity of the topic means that you have to constantly say, “I'm not sure. I'll get back to you. This is what I know and what I don't know.”

Even for those of us who are fully immersed in sustainability topics daily, we don't have all the answers at our fingertips. I think that's why [there’s] almost a tension between everyone wanting to talk about sustainability but not enough people knowing how to do so.

Where should you look to work when starting out in sustainability?

For all the good talk and intention from some leaders in this space, what they really want to do is think around the edges rather than question the system. At the moment, there is a genuine urgency behind the climate crisis. [In Australia], the sky was glowing orange and it was raining ash. That is our new normal. The conditions in which we do business are radically changing and are not going to change back.

If you're starting out today in any business, you're looking for a corporate culture that speaks to your values — and the ones that don't are trying to bolt on something that doesn't mean very much. It's easier for a start-up to go hard on sustainability and build a structure around that than it is for the traditional laggards to build something to turn a big old ship.

Forget what's gone before. Don't look up to the Karl Lagerfelds of the past as your fashion North Star.

I recently visited Allbirds in San Francisco, where compassion and kindness is deeply embedded in the way they do business as well as through their supply chains. It's full of young people who look delighted to be there and it's not just big companies. Small designers that have a purpose, a clear sustainability agenda and meaningful goals, are the companies attracting the best talent. The young, independent designers are questioning the system they are in in a rigorous way.

What does the future of working in sustainability look like?

Sustainability is not a trend, in this season, out the next. It’s only going to get more important and there is a massive opportunity for the next crop of fashion professionals. While the climate is frightening and stark, the opportunity to be the architects of something new is actually exciting.

To be an emerging wannabe change-maker activist that designs their own system is now possible. The outlook for dynamic thinkers who are willing to stop being siloed and collaborate effectively, like scientists and tech with designers to build a different fashion future, is huge.

My advice is to be bold. Forget what's gone before. Don't look up to the Karl Lagerfelds of the past as your fashion North Star. I don't think, if you want to be a designer, you have to produce a collection wholesale. There are loads of other ways and what they might be is up to you.

What resources should those interested in sustainability look at?

From Cradle to Cradle to The Nike Circular Design Guide, there are lots of open-source toolkits that help designers get their heads around circularity. The Centre for Sustainable Fashion is an amazing resource looking at waste and circularity from a design perspective.

Climate-wise, everybody needs to read the IPCC reports. If you're looking at being a next-generation leader, it's about materials, understanding climate, soil and trying to figure out new materials.

The future belongs to those who develop new ways to work across disciplines and collaborate more effectively, and those who understand the challenges of sustainability have a head start.

Here are the most exciting job opportunities in sustainability available on BoF Careers:

Editor’s Note: Since the publication of this article, Clare Press has left her role as sustainability editor at Vogue Australia and is now a consultant, as well as the creator and presenter of the Wardrobe Crisis podcast.

This article was revised on 21 January, 2020. An earlier version misstated Clare Press’s job after Rolling Stone as working at Harper’s Bazaar Australia under Laura Brown. This was incorrect: she was a regular freelance contributor reporting to Laura Brown.