There are few sectors of the economy that offer as wide and interesting a range of career opportunities as fashion. "How I Broke Into Fashion" offers a first-hand account of how top fashion professionals built their careers in the industry, tracing their path to success. For industry advice or more jobs like this, visit BoF Careers.

NEW YORK, United States — Regarded as the “eyes of Bergdorf Goodman,” Linda Fargo is responsible for shaping the visual identity of the legendary New York department store in her role as senior vice president of the fashion office and store presentation. A fine arts graduate of the University of Wisconsin-Madison, her first job was as a window dresser at Macy’s in New York, eventually rising to become visual director.

Fargo has been with Bergdorf Goodman since 1996, when she was hired as visual director of the women’s store. Today, as she celebrates her 20th anniversary with the company, the sartorial doyenne is playing the role of buyer for her own shop-in-shop, "Linda's at Bergdorf Goodman," and will be guest editor for the June edition of the store’s magazine.

BoF: What attracted you to work in fashion, and specifically, retail?

LF: Having grown up in the Midwest of the United States, I came from a fine arts background. Like many young people who are coming out of school, I was trying to figure out how to turn my interest into a career. A part of me knew that I needed to go to New York, but I had to figure out: How do I apply this artistry in a way so that I can get paid every day without being an artist?

Your career is like a relationship — when it doesn't work out, you learn a lot about the things that do and don't work for you.

I didn't want to be part of a gallery system. A lot of my work as a young artist was [in the form of] multimedia collages. I did a lot of things that were, in a sense, under glass. I think that’s how I was drawn to windows. The fashion component came to me through osmosis when I started working for the largest store in the world, Macy's New York, which gave me my first job.

BoF: What was your first big break?

In a long career there is no one big break, but many big breaks, like a series of milestone moments. It happened in a very short amount of time. The early mid 80s was the height of the Aids epidemic; it was all very sad. A lot of the people I worked with were dying. All of a sudden, the window director passed away and by default, I became the new window director. I hate to even call that a ‘big break’ because it’s not a good one, but that’s how I got into windows.

Macy's, at that time, was a different place. Before all these different mergers had happened, it was a store that carried brands like Masada, Kansai Yamamoto, Glare, Kenzo and Armani. We also had a fantastic fashion director, who did all these great concept shops, and I would be the one who would build the shop for her. That was really the beginning of my fashion education. I learned about designers like Geoffrey Beene, because I would see them through the windows, and I started absorbing brands like Calvin Klein and Donna Karan, who were so new then.

BoF: How did you sustain momentum in your career?

You have to be open to the next chapter. I tried mass market for a little bit and worked for the Gap for a few years. Something I think young people need to know is that [finding your career path] is a bit like a relationship. Very often, when it doesn't work out, you learn a lot about the things that do and don't work for you. You might not like a job if you have to travel all the time. One of my big takeaways working at the Gap was that as much as I completely respected the brand, because of the scale of it and how incredibly well managed it was, it wasn't for me. I am really all about the theatre and drama and beauty of fashion and that doesn't exist in mass market. 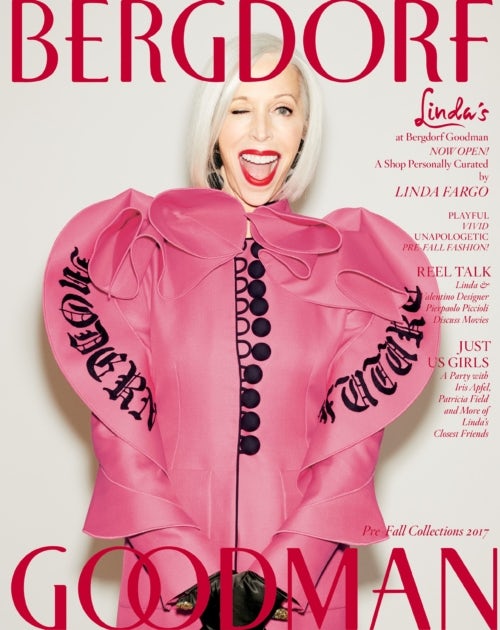 That's what propelled me to knock on the door of New York again and I went to Bergdorf Goodman, because it was a store that I had always pressed my face up against the glass. I was almost afraid to walk in. I created this huge book. It was a proposal that was like, ‘If I worked for you, this is what your windows would look like and this is what your shops would look like.’ I ended up getting hired. Sometimes I think you have to go out of the box for something that you really want.

BoF: This is your 20th anniversary at Bergdorf Goodman. You’ve gone from creating window displays to essentially becoming the face of the department store. How were you able to grow your career at the same place? How did you approach new roles and adopt skills?

These things are organic. When I worked as a window director, people were saying: 'We love this magic happening in the windows, how can we bring this to the interior of the stores?' These kinds of things happen organically, but you have to seize the moment. You also need to have some good fortune and work with people who promote talent.

I am also Bergdorf's store design director. I am the lead designer of all the renovations that we do at the department store. That only happened because I stepped up. There was an opening and nobody was really doing it, but things needed to get done. So my work partner Susan and I just stepped in and started doing it, then it officially became my responsibility.

The lesson from this is: step up and do more than you are asked to do. Be helpful. Saying “that is not really my job” is not going to propel your career. Right now, I am becoming more of a shopkeeper or someone who develops concept shops, which is the beginning of another chapter for me.

BoF: Tell us about a favourite project and what lessons of success you took away?

One of the favourite projects that I worked on was celebrating the “Wizard of Oz's” 50th anniversary. We had everything from recreating the flying monkeys to working with teams from Hollywood who were adept at making incredible costumes and creatures. We also recreated munchkins and ran a brick road down the centre of the store. We worked at an incredible speed, on a tight budget. There was not a moment to waste.

It was a very collaborative event. We worked with the event department, PR, marketing, and more. You learn that anything with a broad reach and resonance involves teams of people and meetings, brainstorming and understanding who is handling this and that. You are not operating in a vacuum. I needed to have a lot of creative people working with me and for me. The challenge, for me, was for them to get fulfilment and be challenged by these projects, so they wouldn’t feel like they were just a cog in my wheel.

Impress yourself and chances are that it's going to resonate with other people as well.

This was a big lesson in my early days: once you identify other talented people, you need to give them areas that they can own. Let them ‘fly’ with a certain amount of parameters. Learn how to harness other people's creativity and learn how to collaborate. It doesn't matter what business you're in. That's got to be a key skill. Collaboration is an active and inactive process. You're listening and absorbing other people’s messages, while simultaneously, you also need to impose vision. There are people who aren't collaborative, who don't listen, who only push their own agenda, and it is frustrating. I don't think they get the best result from it either.

BoF: What do you believe is essential to being successful in the fashion industry?

I think for people to have longevity in their careers, there has to be an unspoken feeling of joy. Work has to be fun. You need to have a lot of moments where you are laughing, enjoying the challenges and enjoying the people you are working with. There is also a lot of tediousness and follow-ups, and you have to respect the tenets of professionalism. It goes without saying that you need to pay respect to hierarchy, have patience for meetings, as well as for long and short-term planning.

Something that is very important for young fashion people to know is that there are thousands of jobs in the fashion industry. You don't have to be a designer. There are so many other possibilities within fashion.

Highly creative industries require a variety of skills and a lot of left-brain, right-brain thinking. You have to be able to tap your creative side and you also have to be very organised, collaborative and be able to operate on a lot of projects simultaneously. Everybody should try to exceed expectations. Try to satisfy yourself first. Don't spend all this time second-guessing what everyone is looking for. Solve it for yourself first. Impress yourself and chances are that it's going to resonate with other people as well. That's it.

For industry advice or more jobs like this, visit BoF Careers, the global marketplace for fashion talent.