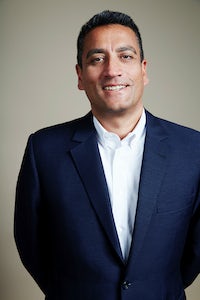 LONDON, United Kingdom — After 12 years as chief executive officer of Alexander McQueen, Jonathan Akeroyd has been appointed chief executive of Gianni Versace SpA. Akeroyd's appointment is effective immediately, but his official start date is 6th June according to the company.

“Jonathan brings a proven track record in building global brands, steering growth and driving strategic development. Jonathan Akeroyd’s industry expertise and vision will be key to advancing the next phase of Versace’s development," said Donatella Versace, vice president and artistic director of Versace, in a statement.

“I look forward to implementing a long-term business strategy that supports the visionary and creative direction of Donatella Versace and her team. This is an exciting opportunity to take Versace to even greater success,” added Jonathan Akeroyd.

Akeroyd succeeds Gian Giacomo Ferraris, who joined the brand in 2009, at a time when the company’s net financial position was a near €80 million loss on a turnover of €270 million. Under Ferraris, Versace grew at a compound annual growth rate of 17 percent from 2010 to 2015, posting revenues of €645 million and a 20 percent rise in core profit in 2015.

The family-owned brand, which sold a 20 percent stake to New York-based private equity firm Blackstone Group in February 2014, also has plans to list on the stock market. In November, Ferraris told BoF that an IPO will depend on market conditions, but “as soon as possible, we will do it.”

In March, the Milan-based company announced plans to invest more than €50 million in expanding its retail network and developing its e-commerce business, after its online sales increased by 31 percent in 2015.

“We are proud of our ability to attract visionary leaders," continued Donatella Versace. “Mr. Ferraris has done a superb job of securing Versace’s status as one of the world’s leading luxury brands.”

Akeroyd, who began his career in retail as a store manager at Harrods in London, exited Alexander McQueen earlier this month and was succeeded by Emmanuel Gintzburger, former retail and wholesale director at Yves Saint Laurent.

During his time at the Kering-owned brand, Akeroyd oversaw significant expansion, including the rollout of accessories and fragrance lines and the launch of the McQ diffusion line in 2010. He also steered the brand through the death of its founding designer, and oversaw the appointment of Sarah Burton as creative director.