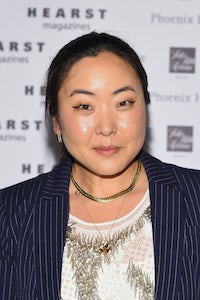 Aya Kanai, who most recently served as editor-in-chief of the US edition of Marie Claire, has been named Pinterest’s new head of content and editorial partnerships. In her new role, she will oversee editorial strategy, including new content for the platform from publishers, creators and influencers. Sally Holmes, will succeed Kanai as editor-in-chief of Marie Claire.

Laurent Bergamo, the general manager for the Middle East at Valentino, has been appointed chief executive of the Americas region, effective immediately.  He has been replaced by Simone Bertolini. Bergamo will report to Marco Giacometti, chief commercial officer at Valentino. In his new role, Bergamo will oversee a new phase of development of Valentino’s retail, wholesale and online distribution networks in the American, Canadian, and Mexican markets.

Agathe Derain, who most recently served as responsible sourcing director at Chanel’s fragrance and beauty division, has been promoted to the newly-created role of head of human rights and corporate sustainability, effective immediately. In her new role, she will drive Chanel’s human rights due diligence programme, identifying and addressing potential risks in the company's global supply chain. She will report to Andrea d’Avack, global chief sustainability officer at Chanel.

Almost a year since Alber Elbaz and Richemont announced their joint venture AZfashion, Elbaz has chosen Laurent Malecaze to lead the fashion start-up, effective October 12. Malecaze is currently the chief executive of the New York-based luxury retailer The Webster.

Sophia Liao, the president of Condé Nast China, has stepped down from the role after  joining the company in 2017. A successor is yet to be named.

Joe Sabia, the head of creative development at Condé Nast Entertainment, is stepping down after six years at the publishing house’s entertainment division. Sabia plans to work as an independent creative video producer. Best known as the host of Vogue’s “73 Questions” interview series, Sabia said he will continue to work for the entertainment division as the host of “73 Questions,” while also taking on other clients.

Matchesfashion has appointed Sean Glithero as its new chief financial officer. Glithero was previously CFO at global SME loans platform Funding Circle Holdings plc.n. He will assume his new role at the end of September. Meanwhile, Jason Weston, an Amazon veteran who most recently served as the e-commerce giant’s director for Europe and special projects, has been named chief operating officer at Matchesfashion and will replace Tom Athron.

British Fashion Council add to its executive board

Jamie Gill, chief executive of Roksanda, June Sarpong, director of creative diversity at the BBC, Scott Morrison, the founder The Boom! and Sian Westerman, the senior advisor at Rothschild & Co. will join the BFC Executive Board as non-executive directors, effective immediately.

Michelle Poole, who most recently served as executive vice president and chief product merchandising officer at footwear company Crocs, has been promoted to president, effective immediately. Poole, who has also previously worked for Timberland, Kangol, Converse, MTV Europe and Pepe Jeans, will oversee the Crocs regional commercial teams for the Americas, Asia and EMEA, as well as leading the company’s product design and management, merchandising, and marketing teams. She will continue to report to Andrew Rees, chief executive of Crocs.

Brock Cardiner, who most recently served as managing editor at Highsnobiety, has joined the virtual shopping app Hero as its content director. In his new role, Cardiner will oversee the content strategy of the app’s recently launched digital magazine Elsewhere.

Katelyn Glass, previously the e-commerce director of the New York-based menswear brand Rowing Blazers, has been promoted to chief operating officer, effective immediately. In her new role, she will be working closely with Jack Carlson, founder and chief executive of Rowing Blazers.