The London-born photographer, whose signature sun-soaked style subverts the industry’s outdated beauty ideals, has made history as the first Black woman to shoot the cover of both American and British Vogue.

The London-born photographer, whose signature sun-soaked style subverts the industry’s outdated beauty ideals, has made history as the first Black woman to shoot the cover of both American and British Vogue.

Nadine Ijewere made history this month as the first Black woman to shoot the cover of American Vogue, capturing Selena Gomez in a regal pose against a backdrop of palm fronds for the magazine’s April issue.

The opportunity came about through Ijewere’s long-standing collaborative relationship with stylist Gabriella Karefa-Johnson, fashion director of Garage magazine and regular Vogue contributor. Karefa-Johnson had worked on the last three American Vogue covers and, when the opportunity presented itself, put Ijewere forward to do the job for the magazine’s April issue.

“It was a surreal and amazing opportunity,” Ijewere told BoF. “It’s taken a long time but it’s great to see Vogue take steps in this direction.”

It’s the second time Ijewere has experienced the feeling. She was also the first woman of colour to shoot the cover of British Vogue only two years ago in 2019, shortly after Edward Enninful was named the first Black editor-in-chief of the legacy title. The visibility it offered her opened up countless doors. Now she is among a vanguard of creatives at the forefront of fashion’s unfurling reckoning over race and inclusivity.

With her latest cover shoot, she joins the handful of photographers who have shot the cover of American Vogue, which remains fashion’s most iconic monthly magazine. For most of the last decade, just nine photographers — eight of them men, all of them white — had photographed the cover. And although the number has doubled in the last three years, the number of Black photographers tasked with the job remains disproportionately low. Meanwhile, the media’s role in upholding racist hierarchies within the fashion industry has come under renewed scrutiny since last summer’s Black Lives Matter protests, which saw a number of high-profile publications — including American Vogue — grapple with accusations of racist discrimination.

Despite her success, Ijewere is all too familiar with the barriers that still exist and the pressure on Black and other creatives of colour to over-perform and over-deliver to compete for the best-paid most high-profile jobs. “There’s this mentality that only one of us can exist in these spaces at one time,” she said. “I hate that because it causes this competitiveness between us when there doesn’t need to be.”

At times, that pressure has proved too much and Ijewere has paused her work to realign and protect her mental health. But she keeps fighting for more representation.

For all the challenges, the South London-born image-maker now counts as one of her generation’s most exciting and impactful photographers.

Ijewere’s vibrant, sun-soaked images of women captured in candid moments of joy have long been staples in the pages of fashion magazines such as British Vogue, Garage and i-D. Her commercial client list is equally impressive; brands including Dior, Nina Ricci and Hermès have tapped the 29-year old photographer to collaborate on campaigns. She also has a first solo exhibition due to open at C/O Berlin, Germany on May 29 once lockdown measures are eased and run until September 2. 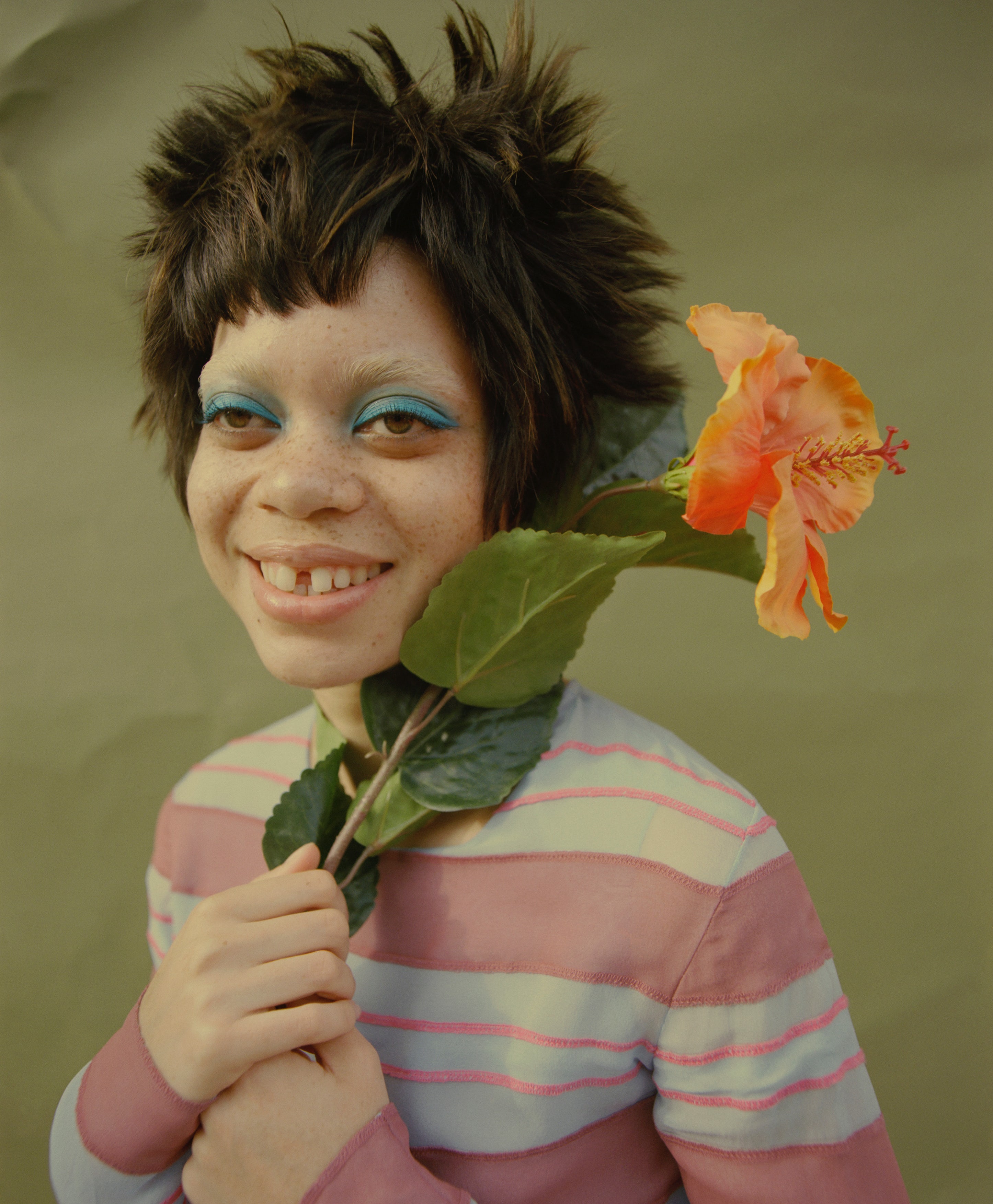 None of this might have happened were it not for a last-minute decision to add photography to the list of science-based subjects Ijewere selected in her final years of school with a view to studying medicine. “I didn’t think at the time that [photography] could be a job, I just knew that it’s something I wanted to study,” she said. “I wasn’t even really thinking about the future.” But by the time the photographer graduated high school, she knew medicine “just wasn’t for me.” Instead, she repeated a year to gain a diploma in fine art before going on to study photography at UAL’s London College of Fashion.

After graduating, she spent three years working at an interior design company, organising shoots on the side with friends, collaborators and small magazines with even smaller budgets.

It was during these early years, through trial and error, that Ijewere developed her distinct visual language, characterised by optimism, joy and a wide spectrum of vivid, rich and warm colours. In 2017, after two years of experimentation, her photographic style landed her a spot in a group show titled New African Photography II at Red Hook Labs, a New York-based community-focused art space that has helped accelerate the careers of photographers like Kristin-Lee Moolman and Scandebergs. Editorial commissions from publications like Allure and WSJ. Magazine quickly followed.

“What first drew me to Ijewere’s images was that there was this joy in the images, and the colours were so striking,” said WSJ. Magazine executive photo director Jennifer Pastore. “There’s that image of a woman smiling with a gap in her teeth — the flower, her gaze are just beautiful. How can you not love that image?”

In February 2018, Ijewere was signed to CLM Agency, a move that offered her both technical support, introducing her to a wide network of creatives, and strategic career advice that eventually helped her land the historic British Vogue cover.

My culture, my identity, where I grew up, I think that’s where I find most of my inspiration.

Ijewere’s references often come from her Jamaican-Nigerian heritage and memories of roaming through south-east London as a teenager. One particularly powerful example is an editorial she shot for Vogue US last November in collaboration with Karefa-Johnson titled “Family Values.” The spread celebrated the figure of the Auntie, a term of endearment and respect for older women that represent “a predominant, unapologetically strong figure within our culture,” Ijewere said. The editorial is populated by a cast of striking Black women in dynamic poses wearing long dresses adorned with large floral prints.

“My culture, my identity, where I grew up, I think that’s where I find most of my inspiration,” Ijewere said.

Perhaps the most characteristic aspect of Ijewere’s photography is her unmistakably intuitive approach to composition. Her photographs are often shot mid-movement from unconventional angles that animate her characters and distil the kinetic energy of the people she captures.

“There is a clarity to her vision that’s really attractive and I think that’s something that has been consistent throughout her work,” said WSJ. Magazine’s Pastore. “I find that very comforting as a photo editor.”

Ijewere’s clarity of vision is in part driven by bold casting choices that celebrate non-traditional standards of beauty long overlooked by mainstream fashion media. The drive to diversify what is considered beautiful is in part motivated by her own experiences pouring through decades of archival issues of fashion glossies.

“I didn’t see anyone that looked like me or my friends [in these magazines]. And if they were Black or a person of colour then their features were very European,” said Ijewere. “You wouldn’t see Afro hair, you wouldn’t even see curly hair. And so that inspired me.”

Ijewere’s upcoming exhibition at C/O Berlin is suitably named Beautiful Disruption, a title inspired by the photographer’s commitment to showcasing different forms of beauty. One of the photographs is the smiling gap-toothed woman that so inspired Pastore. The photograph is part of a series titled Ugly that Ijewere shot for Vogue Italia in 2017, aiming to challenge the aspirational beauty images that so often featured only slim, white heavily-photoshopped women.

“This show is about fucking up [the existing ideals] but in a beautiful way, because we’re showing that beauty has many different interpretations,” she said. “At the same time I hope that, in the future, it’s not seen as a disruption — it just is.”