This week, Jim Gold takes the helm of the luxury retailer, while stylist Ibrahim Kamara takes the reins at the British style bible. 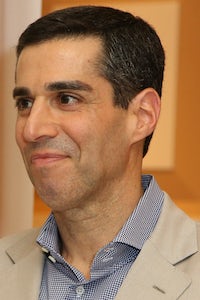 This week, Jim Gold takes the helm of the luxury retailer, while stylist Ibrahim Kamara takes the reins at the British style bible.

Srivats, who joined from Tesla in 2018, has exited and Jim Gold, former president of Neiman Marcus, is stepping in on an interim basis as of January 11. Co-founder Lauren Santo Domingo remains in her role as chief brand officer. She is also on the board of the company, which counts Adrian Cheng, Apax Digital and New Enterprise Associates as investors.

Isabella Burley, who has led the title since 2015, is exiting the British youth culture bible, with fast-rising stylist Ibrahim Kamara set to take her place as editor-in-chief. Lynette Nylander has been named executive editorial director and will be responsible for shaping the title’s editorial strategy, while Dazed’s current artistic director Jamie Reid and fashion director Emma Wyman are stepping down.

Enzo Quarenghi will join Valentino to head a new division combining its Retail Excellence and Global Markets units, the Rome-based brand said in a statement Monday. Quarenghi, who was previously Italy CEO for payments giant Visa, is being charged with revamping the brand’s customer journey and enhancing strategic connections between communications and sales.

Ponzo will succeed Anthony Ledru, who was appointed chief executive of Tiffany following its acquisition by LVMH in October 2020, as executive vice president of the luxury label’s commercial activities. Ponzo’s appointment, effective January 7, makes him responsible for Louis Vuitton’s network of 460 physical stores and e-commerce operations as well as store planning and client relations. Ponzo first joined Louis Vuitton in 2016 as head of the company’s Japan operations after a stint at Swatch Group. Nicolas Villeger will take over as zone president of Japan.

Petri joins Balmain from Chaumet, where he served as retail director of Europe. Prior to this, he worked in strategy and project management at LVMH. In his new role, Petri will spearhead Balmain’s commercial strategy and optimise its wholesale and retail distribution network.

Beautycounter appoints Dasha Smith to board of directors

Smith, the chief administrative officer for the National Football League, joins the environmentally-conscious beauty brand’s board as an independent director. Smith’s prior job experience includes leadership positions at Time Inc. and Sony Music Entertainment. She is the fifth woman to join Beautycounter’s nine-member board. Beautycounter also announced that current board member Gina Boswell has been appointed chairwoman of the board, replacing John Replogle, who will remain a director.

The video commerce platform, which sells limited-edition products aimed at Gen Z, hired the Urban Outfitters veteran to oversee buying and merchandising across the company, including live events. NTWRK was launched in 2018 by ComplexCon co-founder and chief executive Aaron Levant. Financial backers include entrepreneur Jimmy Iovine and other entertainment industry elites.

The former global chief executive of Chanel is the latest independent director to be appointed to the board of Credo, which specialises in “clean,” environmentally-friendly beauty. The board is now 70 percent female. Prior to Chanel, where Chiquet held a leadership role for 13 years, she spent over a decade at Gap, Inc.

Howard, who has worked with brands like Rolex, Tresemmé and Calvin Klein, previously spent nearly a decade running her own consultancy business. Science Magic’s fashion clients include AllBirds, MaxMara, Versace and other accessible and luxury brands. Science Magic launched in London and New York in October of 2020.