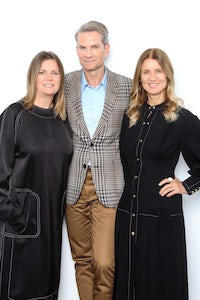 Karla Otto has announced that she will become chairwoman of her eponymous PR label, with Executive Director Alexander Werz and K2 Co-Founder Isabelle Chouvet named her successors as co-chief executives. Chouvet will also remain chief executive of The Independents, the holding company for K2, Karla Otto and Dubai-based agency The Qode.

Alessio Vannetti, who stepped down from his role as Gucci’s global communications director in September 2019, has been appointed Valentino’s first ever chief brand officer. Effective March 1, 2020, Vannetti will report to Valentino Chief Executive Stefano Sassi.

Zadig & Voltaire has appointed Rémy Baume president. Baume joins the company from Kidiliz Group, which makes childrenswear lines for Kenzo, Paul Smith and Levi’s, among other brands. He replaces Jean-Jacques Guével, who was named chief executive of Balmain in December 2019.

Glenda Bailey has stepped down as editor-in-chief of Harper’s Bazaar, after 19 years at the helm of the publication. She will stay on at Hearst as a global consultant for the magazine’s international editions. A successor has not yet been named.

Ben Cobb has been appointed editor-in-chief (men) at LOVE magazine by Editor-in-Chief Katie Grand. Cobb joins the magazine from Another Man, where he stepped down as editor-in-chief in October after 10 years at the publication.

Johanna Andersson has been named chief executive of Totême, a role previously held by Founder and Creative Director Elin Kling. Andersson joins the company from McKinsey & Company, where she co-led the Scandinavian apparel, fashion and luxury goods hub.