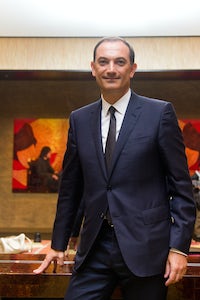 Former Givenchy Chief Executive Philippe Fortunato is set to lead Richemont’s fashion and accessories division, effective September 1. Fortunato, who has previously worked at Louis Vuitton, Fendi, Christian Dior and Louis Vuitton in China, will assume the responsibilities of Eric Vallat, who departed the luxury group’s fashion and accessories division in September 2019 after a brief stint in the role.

Meanwhile, Richemont Human Resources Director Sophie Guieysse will not be seeking re-election at the annual general meeting on 9 September and will be stepping down from the committee. She will reportedly stay on in her HR role.

Former PVH executive Daniel Grieder has been named chief executive of German suit maker Hugo Boss for a period of five years. He will succeed Mark Langer, who will exit the brand on September 30. (Most recently, Grieder was chief executive of Tommy Hilfiger and PVH Europe.)

The LVMH-owned brand has tapped Matthew Williams, the founder of luxury streetwear-inspired label 1017 ALYX 9SM, to be its next creative director. He succeeds Clare Waight Keller, who left the company in April. Williams is slated to showcase his first collection for the luxury brand in Paris in October, and will continue to run Alyx independently.

The fashion glossy named Somali-American model Halima Aden as its first diversity editor-at-large. In her new role, Aden will write a monthly column covering social justice topics, inspiring personalities, and committed organisations who are creating a positive impact. The 22-year-old made history with her cover issue for Vogue Arabia in June 2017 as the first hijabi model to feature on a Vogue cover.

Kering adds to board of directors

Luxury conglomerate Kering invited actress Emma Watson, Jean Liu, president of Chinese rideshare app Didi Chuxing, and Tidjane Thiam, the former chief executive of Credit Suisse Group who now serves as special envoy on Covid-19 to the African Union, to its board of directors. The nominations were approved earlier this week at the group’s annual general meeting.

Darren Walker, president and chief executive of the Ford Foundation, has been nominated to be an independent director on the American fashion brand’s board. The nomination follows an announcement that Joyce F. Brown, president of Fashion Institute of Technology, and Robert C. Wright, a senior adviser at Lee Equity Partners, will not be seeking re-election after serving 19 and 13 years on the board, respectively.

Carrie Baker, who previously served as the outerwear brand’s vice president of communications, among other titles, has been named president for North America. She will oversee the brand's marketing and commercial operations and lead the growth strategy in the region.

Kara MacKillop, who joined the company in 2014 as senior vice president of human resources, has been appointed chief of staff and executive vice president of people and culture. She will oversee strategic projects for the office of the chief executive and will continue to oversee people and culture. Baker and MacKillop will report to Canada Goose President and Chief Executive Dani Reiss.

Eyewear company Marcolin Group has announced Fabrizio Curci as its chief executive and general manager, effective June 22. Curci, who previously led Italy-based trade fair and exhibition organiser Fiera Milano SpA, will oversee the company’s development strategy in a bid to position itself as a global leader in the eyewear industry.

Guillaume Gellusseau has been named chief marketing and communication officer of Galeries Lafayette as well as BHV Marais, reporting to Galeries Lafayette and BHV Marais Chief Executive Nicolas Houzé. Gellusseau now also sits on the executive committee and succeeds Guillaume Houzé, who is joining the group’s corporate board and will remain president of the Galeries Lafayette foundation and fashion prize ANDAM. Recently, the French department store said the pandemic could set the group back by €1 billion due to a decline in consumer spending.