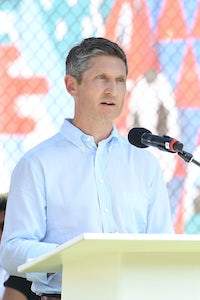 Walmart has appointed William White to chief marketing officer, effective May 11. White joins the company from Target, where he most recently served as senior vice president of marketing. He replaces Barbara Messing, who exited the company in August last year.

Hash Ladha has stepped down as chief executive of Oasis and Warehouse Group after the UK retailer filed for administration earlier this month and recently made over 1,800 store employees redundant.

Diesel North America has named Patrick Valeo chief executive with immediate effect. Valeo joins the company from luxury leather goods brand MCM, where he was president of the Americas and global head of commercial sales. Reporting to Diesel’s global chief executive, Massimo Piombini, he replaces Stefano Rosso, who will stay on as a board member of Diesel owner OTB.

Retail group Chico’s FAS has promoted Molly Langenstein to chief executive and president, effective June 24. Langenstein currently serves as president of the company’s White House Black Market and Chico’s brands, a role she has held since August 2019. She replaces Bonnie Brooks, who will become executive chair of the company board.

Jiang Fan, president of Alibaba-owned Taobao and Tmall, has been removed from Alibaba’s partnership and demoted from senior vice president to vice president. The reappointment comes after an investigation into whether his relationship with a high-profile influencer resulted in preferential treatment of certain vendors at the e-commerce platforms.

Tang Shuang will exit Vogue China, where she is currently deputy publisher, in early June. It is understood that the departure was due to a disagreement about the recently launched Chinese edition of Vogue Business, which acquired Tang’s WeChat channel comprising some 60,000 subscribers.