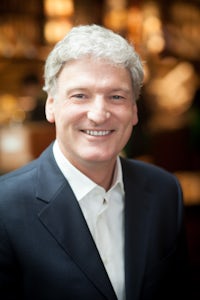 Martin Brok, who most recently served as Starbucks Inc.’s president of Europe, Middle East and Africa, has been named president and chief executive of LVMH-owned Sephora, effective September 14. Brok will succeed Chris de Lapuente, who led the beauty retailer for 10 years. De Lapuente will remain a member of LVMH’s executive committee and will take on additional responsibilities at the group, to be announced at a later date.

Nicolas Di Felice, who previously served as the senior womenswear designer at Louis Vuitton, has been named artistic director at Courrèges (which is owned by Artémis, Kering CEO François Pinault’s family investment vehicle). Di Felice is slated to present his first collection in March 2021. He will report to Adrien Da Maia, chief executive of Courrèges.

Kim Jones has been named Fendi’s artistic director for womenswear. He will also continue in his role as creative director at LVMH stablemate Dior Homme. Jones will work alongside Silvia Venturini Fendi, who will continue to head the accessories and menswear divisions at Fendi.

Arnaud Bazin, who most recently served as senior vice president of collection merchandising at Versace, has been appointed deputy general manager at Lanvin. Meanwhile Grace Zhao, who joined the luxury brand last November from Dolce & Gabbana, where she was senior vice president for the Asia Pacific region, has been named deputy general manager for Lanvin in the Asia-Pacific region. Both Bazin and Zhao will oversee the overall strategy for the brand and its implementation globally.

Chris Benz, who took up the role of womenswear designer at J. Crew in February 2019, has stepped down. A successor is yet to be named.

Simone Oliver, who is currently part of Facebook and Instagram’s partnerships team, has been named editor-in-chief of Refinery29. Oliver, who was previously the digital director at Allure magazine and the digital fashion editor of The New York Times Styles section, will oversee Refinery29 globally, working with Executive Editor Connie Wang and Senior Vice President of Editorial Content Strategy and Development Julie Alvin.

Asad Syrkett, who most recently ran all New York operations for Hem, an international furniture brand and design studio based in Stockholm, Sweden, has been named editor-in-chief of the US edition of Elle Decor, effective September 14. Syrkett, who was previously deputy editor at the design and cities website Curbed and held editorial positions at Architectural Digest and Architectural Record, will oversee the Elle Decor’s content strategy across the brand’s print and digital platforms.

Katie Grand, the founder and editor-in-chief of LOVE Magazine, has exited the biannual fashion publication she launched in 2009 under Condé Nast international. A spokesperson for Grand said she has plans to work with Sarabande, the foundation established by Alexander McQueen in 2007 to support emerging artists, and The Red Cross. A successor is yet to be announced.

Mark Breitbard, who became president and chief executive of Banana Republic in 2017, has been appointed head of Gap Global, effective immediately. In his new role, Breitbard will focus on Gap while he continues to lead the company’s franchise, strategic alliances and licensing business, Intermix and Janie and Jack. Ann Doyle, the general manager of Banana Republic North America, will continue to lead the brand in the interim until a successor is found.

Tara Simon, who most recently served as senior vice president of merchandising for prestige beauty at Ulta Beauty, has been named senior vice president and global general manager of Too Faced, effective immediately. In her new role, Simon will guide and implement the brand's global strategic vision and lead the teams across the organisation. Simon succeeds Eric Hohl and will report to John Demsey, executive group president of Estée Lauder Companies.

Under Armour adds to its board of directors

Wes Moore, the chief executive of the nonprofit organisation Robin Hood Foundation, has been appointed to Under Armour’s board of directors, effective October 1.

Neil Fiske, who stepped down as chief executive of Gap earlier this year, has been appointed as the first chief executive of Marquee Brands. Fiske will oversee the company’s portfolio, which includes brands like BCBG Max Azria, Bruno Magli, Martha Stewart, Dakine and Ben Sherman.

Les Green, who previously served as Nike Africa’s marketing director and global brand director for Nike Sportswear, has been named vice president of marketing at Teespring. Green, who has spent 18 years working with brands like Nike, Timberland, Nissan and Powerade, will continue the social commerce platform’s development as a leading platform which enables creators to develop their personal brands and engage with their fans.

John Boumphrey, who is currently the vice president of Amazon Fashion Europe, has been promoted to UK country manager. He is slated to take up the role in mid-November. Boumphrey, who first joined the e-commerce giant nine years ago, will replace current head Doug Gurr.

Murray Lambell, who is currently the vice-president of UK trading at eBay, has been named the general manager of UK operations. Lambell, who first joined the company in 2008, will replace Rob Hattrell, who has been appointed head of eBay Europe.

Maurice Cooper, who most recently founded the marketing company Forward Vision Strategies, has been named senior vice president of marketing at Target, effective September 14. Cooper, who previously served as executive vice president and chief growth and experience officer at Wingstop Restaurants and has held roles at Intercontinental Hotels Group and The Coca-Cola Company, will oversee the strategy for brand, category and promotions marketing across paid, owned and shared media, as well as overseeing the big-box retailer’s key campaigns.

Dennis Millard, the chairman of Britain’s biggest retailer of luxury Swiss watches, said he won’t stand for reelection at the company’s next annual general meeting. Millard, who held the role since 2018, will step down on October 14. Meanwhile, Senior Independent Director Tea Colaianni is slated to replace Millard as interim chair.