How Inez and Vinoodh Embraced Digital

The duo are focused on keeping their photography human despite their intensely digital process.

NEW YORK, United States — In hindsight, it seems remarkable that there was once a moment when combining digital technology and fashion photography was a radical move. But when Dutch photographers Inez van Lamsweerde and Vinoodh Matadin first began to manipulate their images, they were among the first to see and seize the tremendous potential of these new digital tools in a fashion context.

“We saw a demonstration of what Paintbox could do,” van Lamsweerde recalled, referring to a Quantel-produced precursor to Adobe’s Photoshop. “At that point it was used to straighten lines and shine up the wheels of a car for advertising. It hadn’t really been used for fashion or for images of people. We were like ‘Oh my god’ – it was so unbelievably exciting. It just opened up the whole world for us.”

Working as a team, Lamsweerde and her husband, Vinoodh Matadin, have forged a unique personal and creative union which has given rise to a remarkable body of work that seamlessly spans global campaigns for advertising clients including Balenciaga, Dior and Yves Saint Laurent, editorial assignments for magazines such as American Vogue, French Vogue and W, classic black and white portraiture for the New York Times' annual Oscar portfolio, music videos for the likes of Björk and fine art pieces that have been exhibited in some of the world’s most influential galleries and museums.

This 25 year partnership has firmly establishing the duo, known simply as “Inez and Vinoodh,” among the most successful and powerful imagemakers in the fashion industry.

And while digital has long been central to their work, from high-gloss fashion images to the surreal, often disturbing, manipulated human forms that appear in their personal work, technology has always been a means to express a searching imagination and never the object of fascination itself. “For us, it’s about the emotion,” van Lamsweerde confirmed, more than creating something that’s “formal or technical.”

“With digital, finally you could also visualise internal things, you could show an emotional idea or a concept,” she added. “It was that whole thing of breaking through the surface, visually and figuratively speaking.”

Van Lamsweerde met Matadin in 1986 at the Vogue Academy of Fashion Design in their native Amsterdam and first worked together when van Lamsweerde, who went on to earn a masters in photography at the Gerrit Rietveld Academie, was commissioned to shoot Matadin’s clothing line Lawina. The label folded in 1990, but by this time they had become a couple, with Matadin also working as van Lamsweerde’s part-time stylist.

After van Lamsweerde was awarded a yearlong residency at New York’s PS1 Contemporary Art Center in 1992, the couple decamped to New York, a move which allowed them the freedom to continue to aggressively experiment with digitally manipulated images, while also exposing their work to a broader international audience.

In the mid 1990s, when fashion magazines were full of grunge-inspired, documentary-style raw imagery, Inez and Vinoodh’s groundbreaking, highly manipulated and surreal editorial series “For Your Pleasure,” published in the April 1994 issue of The Face, broke the mold and put the pair on the map. Shortly after, major fashion titles came calling and Inez and Vinoodh were soon slipping effortlessly between fine art and fashion from their new home base in New York, to which the couple permanently returned in 1995. 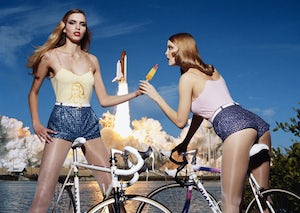 “Well Basically Basuco is Coke Mixed with Kerosene” from the series “For Your Pleasure,” The Face, April 1994 | Source: inezandvinoodh.com

“Consciously, we were never really so busy with the idea of fashion and art,” van Lamsweerde recalled. “At some point, there was attention around that, but for us, we were just making what we were making. It had to do with what we felt we needed to communicate at a certain moment in time and context-wise the venue might be an art space or a magazine.” In this way, the concept behind a 1999 exhibition image titled “Me Kissing Vinoodh (Lovingly)” was effortlessly repurposed, more than 10 years later, for an advertising image for Lanvin Homme. 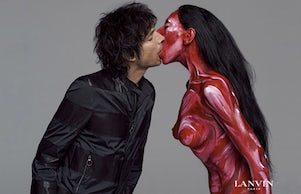 Over the course of more than 20 years of shooting together, Inez and Vinoodh have developed a conjoined approach to taking photos, which allows them to focus on a single subject from multiple angles. “I’m usually the one that directs the model and gets the pictures where the model is looking into the lens. Vinoodh is the one that walks around,” said van Lamsweerde. “Because the model is looking at me, there is a real look in her eyes that you don’t achieve by saying ‘look away,’ where you get a vacant thing,” she explained. Since 1996 their final output has been a mix of both their images, published as a single author. “We share the responsibility, so it really feels much less heavy,” said van Lamsweerde. “Since we both shoot at the same time and shoot from different angles, we know that between the two of us the picture is always there.”

While the duo continues to push the boundaries of fashion editorial, Lamsweerde has seen the space become increasingly confined. “Editorially, there used to be so much freedom that nobody would ask you to shoot a big advertiser for a story. We would, as a joke, put an outfit from Chanel in an editorial, but that was very tongue-in-cheek,” she said. “Now, basically all the editorial pages are infused by the advertisers. To us, it sometimes feels like there is more freedom shooting an advertising campaign, because you sort of strategise the whole thing together with them and understand who they are representing or wanting to reach out to. Whereas, with the editorials, in one story you are covering twelve different designers and it all has to make sense together,” she added. “Sometimes it’s not easy.”

Given her early and passionate embrace of digital, it’s perhaps not surprising that van Lamsweerde is highly active on social media platforms like Tumblr, something which is anathema to many prestige artists. “Tumblr is great for us,” she said. “It’s like having your own magazine.” Indeed, rapid-fire publishing on Tumblr has allowed van Lamsweerde to refresh her approach to photography. “It has made us look at photography differently again because I take a picture and boom it goes on there,” she said. “It doesn’t have to have the whole production around it and it gets an immediate response.”

But for van Lamsweerde, an equal challenge is making sure that their images remain human despite their intensely digital process. “That’s really why we are photographers: because we love people. The possibilities of expression through the body – its forms and poses and movement – is what really drives a lot of our work. It all has to do with showing how magnificently a human being’s body is made. I always feel like every body is interesting. Everybody’s physical appearance is so unique and endlessly fascinating for me,” she said. “We love making people as heroic as could possibly be.”

“I guess that’s the end result,” she said. “It’s finding the ultimate version of the human being that’s in front of you and trying to pull out the essence of what that is for us.”

Ken Miller is an editor, curator and creative director based in New York.