Miuccia Prada loves his work but his grandmother doesn’t understand what he does. BoF sat down with Robbie Spencer, stylist and newly appointed fashion director at Dazed & Confused, to discuss his personal and professional journey.

LONDON, United Kingdom — Robbie Spencer has put bugs and butterflies on models’ faces and sticky food on their bodies. He has dressed nonagenarian Iris Apfel in bold, floral print coats from Comme des Garçons and transformed Daniel Radcliff into a zombie.

Along the way, the 29-year old stylist, who was recently appointed fashion director at influential youth culture magazine Dazed & Confused, has helped to create some of fashion’s most striking editorial imagery for the likes of Vogue Italia, Vogue Hommes International, AnOther, V and The New York Times T, as well as working with brands including Topman, Diesel Black Gold, Neil Barrett and Raf Simons. 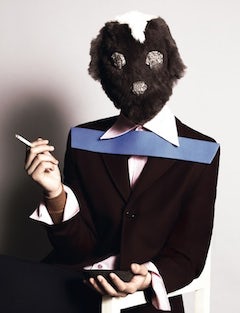 “I work on so many different levels — show styling, or consultancy, as well as putting Dazed as a monthly magazine together and contributing to various other titles — that I almost have to put a different helmet on for every different job I do,” he says.

Spencer hails from Swindon, a town in the West Country of England. As beautiful as he found the stretch of countryside between Oxford and Bath, “I knew soon-off that the type of creative profession that I wanted to explore just would not happen in that kind of place. I knew I had to leave as soon as possible. But I was fully aware from a very early age that fashion is a really tough profession to get into. I knew from the start that I had to start early and start doing internships.”

At the age of 19, Spencer came to London to pursue his studies and completed a degree in fashion promotion, with a focus in journalism, at London College of Fashion. But he earned an equally important education at Dazed & Confused, where he scored an internship and began assisting a formidable group of mentors, including stylists Alister Mackie and Nicola Formichetti, while he was still a student.

“I started at Dazed assisting on the fashion team and gradually got more involved. As the team changed its dynamic, the younger members of the team gradually gained more responsibility. And when Nicola Formichetti became fashion director, things changed quite quickly,” he recalls. “Dazed has been a school for me, for a lot of people, it’s a place where so many amazing people have come out from since Jefferson [Hack], Rankin and Katie Grand began the magazine together. They all used it as a sort of training ground and are still part of this extended family.”

Spencer initially envisioned a career in the art world. “I wanted to be a curator, spatial designer or set stylist,” he recalls, “but I was very keen on making it work in London and quickly getting a job and a career. I saw fashion as a way to do that while remaining creatively fulfilled. In fashion, it’s quite easy to progress quite quickly if you have something to give and you have the right people supporting you.”

But Spencer’s art background has had a powerful influence on his approach to styling. “I approach styling from an idea of executing an image or executing a space, as opposed to purely from a clothing standpoint,” he says. “The more I got involved with Dazed, I realised that clothing is actually a tool that you use to create an image or to tell a story.”

But what exactly does Spencer do?

“This is what I try to get across to my family every time I see them, especially my grandma. It’s really hard. People often don’t know that there are so many people involved in the making of an image and of a magazine and even if they knew, they wouldn’t have a clue what all these people actually do.” 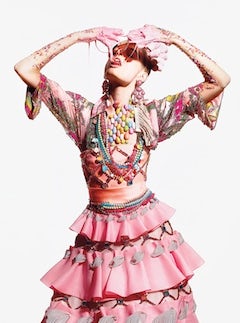 At the most basic level, Spencer’s job “is to source clothes and interpret them into an image. But it’s also about inspiring your readers and trying to educate or enlighten people to new ideas. The term fashion stylist is very broad, you can be everything from a wardrobe coordinator for a film or music video or celebrity, or more of an art director considering the execution of an image, not just the outfit someone is wearing in it. It really depends on how involved you want to be, clothes are a tool for a stylist, but I prefer to consider the whole construction of an image.”

The job can be as exhausting as it is exciting. “It’s really varied,” says Spencer. “A lot of it is travelling — Milan, Paris, New York — and a lot of it is shoot dates, a lot of it is prepping for the shoot dates.” These days, the newly-minted fashion director also spends a lot of time in the Dazed office “trying to get my emails down from 600 to 10.

“A huge amount of styling or being a fashion editor is production and organising,” he says. “And a big part of this job is communication, you have to be a great communicator and make sure everyone on your team understands the image that you’re trying to make. I have to be able to communicate the idea that’s in my head to the entire team or it won’t work.”

“For editorial, everything is dictated right after the shows; we have a big meeting where we feedback things that we saw at the shows that inspired us. What did something a designer showed remind me of, what was the historical or art reference. You contextualise the shows and then you interpret them in your own way.”

Indeed, Spencer’s job is not about blindly disseminating a fashion designer’s point of view, but about adding his own. “You want the designer to be pleased, but you also want them to think ‘Oh, I didn’t think of it in that way, or that’s an interesting way of shooting it.”

Designers, in fact, are often pleased with the unexpected ways in which Spencer reads and reconfigures their collections. Last year, after seeing a cover Spencer shot with pieces from her collection, Miuccia Prada was so smitten she sent a box of special sweets; “they were these amazing pastel-coloured sugared fruits, a delicacy in Italy.”

To achieve the conceptual depth his work is known for, Spencer is fond of sourcing ideas and collaborators from other disciplines. “As soon as I come back from the shows, or if I’m prepping a shoot, the first thing I do is develop this body of research, moodboards and references. The connections often come from outside of fashion and I love collaborating with people that are far removed from the industry because it brings a new perspective to a fashion shoot, and that’s what transforms an image into something else and takes it to another dimension.”

Of course, photographers are a fashion director’s most important collaborator and Spencer has worked with an impressive list of accomplished lensmen, including Hedi Slimane, Mario Sorrenti, Paolo Roversi, Richard Burbridge, David Armstrong, Karim Sadli and his boyfriend, Ben Toms. “I generally start by pairing a photographer with an idea I have, then set up a meeting with them to suggest the idea and get their feedback and then we kind of build on the idea together, figure out the team, models, hair, make-up, set designer and begin the process of realising the idea and turning it into a fashion image.” 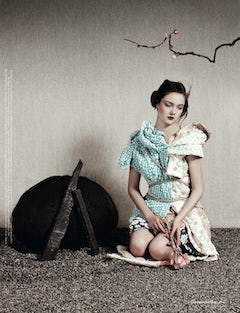 Photo: Ben Toms for AnOther

“What frustrates me most is that people think its an insignificant profession or when people think it’s trivial because its clothes. Of course you’re not saving lives but at the same time you’re doing something that has a value and inspires people. Fashion influences everything, it’s so much more than what people think it is. It’s so culturally driven, but people don’t realise it, they think it's just dress-up.”

So what advice does Spencer have for those aiming to break into styling?

“You need to start super-early and you need to learn as much as you can on the job, as well as study. There is nothing compared to that hands-on industry experience where you learn around the people that are doing it, because that way you also learn how to behave and how to look at things through other people,” he says.

“I think the idea of assisting over recent years has become a bit devalued, the culture recently is people feel they don’t need to assist, they think they can just do their own thing and instantly be a stylist. But you have to be respectful of the people who came before you, you need to learn from someone and be in the right environment to understand how the industry works and how to communicate. Then you take from that, and you go and find your own point of view on it.”