There are few sectors of the economy that offer as wide and interesting a range of career opportunities as fashion. For more careers content or to browse current job opportunities in fashion, visit BoF Careers.

LONDON, United Kingdom — The way we work is changing. Many of us have experienced working in big offices, in cubicles, under fluorescent lighting and at the same desk and computer every day. However, several key trends are leading up to a shift in the way people communicate, collaborate and work.

Economic shifts are redistributing power, competition, wealth and opportunity around the world. Disruptive innovation, new business models and resource scarcity are impacting every sector. “We’re in the midst of sweeping demographic changes that affect companies’ ability to recruit and retain skilled employees,” says Tracy Haugen, a director in Deloitte Consulting's human capital practice, and author of "Workplaces of the Future: Creating an Elastic Workplace."

Indeed, research from management consulting firm McKinsey & Co suggests that there could be an 18 million-person shortage in the supply of high-skilled, college-educated workers by 2020. That means that companies will have to work harder than ever to attract the best employees, focusing on workplace cultures that will attract and keep the millennial generation.

“When vying for top talent, workplace flexibility can be a deciding factor: one in three workers report that being able to flexibly integrate work and life is the most important factor in choosing a job,” says Haugen.

As generations collide and new technologies emerge, workforces are becoming more diverse and companies are looking to innovative solutions to replace less specialised jobs and keep highly skilled employees focused on tasks that create the most value. So, what could this mean for the future your organisation? BoF highlights the five key trends that are fundamentally reshaping the fashion workplace of the future.

"The Future Workplace," a recent report by consultancy firm The Future Laboratory, reveals how the workplace is evolving and what employers need to do to successfully manage employee wellbeing. One of the key findings was, in order to attract and retain high-calibre employees, companies need to foster a flatter and more collaborative environment. 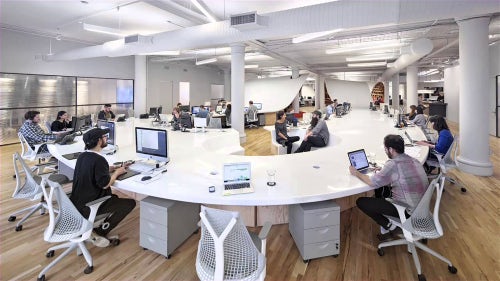 Companies like The Barbarian, a New York-based interactive marketing firm, have taken the open-office concept a step further, filling its offices with an undulating “superdesk.” Designed by Clive Wilkinson Architects, the superdesk is a 4,400 square foot shared worktop for the company’s entire staff and a physical representation of the firm’s shift from hierarchy to community and collaboration.

“Our parents’ generation worked in organisations that were very top-down, with a few different bosses and functional teams for different things, like marketing or finance,” says Florian Peter, chief executive officer of Mandalah Europe, an innovation consultancy. “Today, a new model has emerged where employees are self-organised. It’s basically an ecosystem of individual people — they could be freelancers or employees — who have a role and nobody controls them.”

One company who has adopted this way of working is the shoe retailer Zappos, which in late 2015 introduced a radical new system of self-governance called "holacracy." In a holacracy, there are no managers or job titles and standard hierarchy is eliminated.

Zappos, with 1,600 employees and billions in revenue, is by far the largest company to have adopted holacracy. Its implementation, however, has also been the most controversial: By January 2016, 50 employees had quit their jobs.

Unlike Zappos, however, Zalando restricts self-management to tech staff. At Zalando’s tech hub in Berlin, the teams hold daily “scrums,” short stand-up meetings where each person gives a quick progress update, minimising the need for emails and sit-down meetings.

“There’s a lot of trust, communication and self-organisation,” says Peter, but notes that such new management techniques can also flounder if there is resistance from staff or if leaders cannot provide a structure in which autonomous ways of working can flourish.

The workspace itself will evolve

To reduce real-estate space and the associated costs that come with it, some companies are moving to more open workspaces and offering employees flexible work arrangements. Value Retail, which specialises in the development and operation of luxury outlet shopping villages in Europe and China, allows employees to work remotely, essentially eliminating the need for an office. 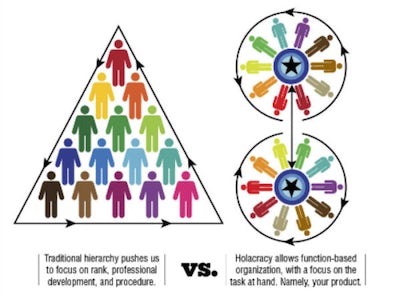 There is also a growing popularity of fixed contract workers. According to the Recruitment and Employment Confederation, 36 percent of British workers have worked as a contractor or freelancer at some point in their career and 41 percent are considering working that way in the future, suggesting that more emphasis will be placed on connecting to anywhere, from anywhere, at any time.

However, it’s not for everyone. “When people work, they’re so often very isolated. They work behind laptops and take on self-organised roles. Personally, I think it’s a good thing to have a physical space where people can get together and have a sense of community,” says Mandalah’s Peter. “Having team lunches, celebrating the success of projects, discussing things [face-to-face] and having rituals — it’s about having real moments when people can share their feelings.”

“With increased responsibility for choosing where and when they work, some employees may find that they miss some of the boundaries that a 9 to 5 office job can provide,” adds Deloitte’s Haugen. “Many workers feel pressured — often by their peers — to be available any time and anywhere. Employees need to learn how to connect and disconnect, which is a new skill for many.”

“We’re all digital natives by now. Mobile technologies and online collaboration tools are transforming how business gets done — and no generation is more comfortable in this virtual work world than Gen Y,” says Haugen. Several companies have adopted technology like cloud computing or file-sharing platforms like Evernote and Dropbox.

Global expansion also means working across time zones, borders and cultures. “As a China-based retailer, ‘normal working hours’ isn’t a very helpful concept to us,” explains Josh Gartner, vice president of international corporate affairs at JD.com, which doesn’t stick to the traditional working hours of 9 to 5. “We work with fashion brands from the US, UK, continental Europe, China and even Australia, so our team works when our partners are working.”

“No longer are employees bound together by place — in the open talent economy, they can work together from anywhere across the globe,” says Haugen. “As more teams work across time zones, the traditional 9 to 5 work day could become obsolete.”

Work in the age of robots

In recent years, powerful computing, big data and the development of deep learning have triggered a revolution in artificial intelligence. Boston Consulting Group predicts that by 2025, up to a quarter of jobs will be replaced by either smart software or robots, and a study from Oxford University suggests that 35 percent of existing UK jobs are at risk of automation in the next 20 years.

As robots in factories and warehouses become more mobile, versatile and affordable, several areas of manual work will be affected. Adidas announced a factory in Germany that will begin manufacturing shoes in 2017. The “Speedfactory” will employ just 160 people; one robotic production line will make the soles, the other production line will produce the upper part of the shoes. With an additional factory planned for the US, it is a scheme that Adidas has described as a “game changer.”

But it’s not just manual labour that’s ripe for automation. White-collar jobs could be at risk as software becomes more sophisticated. One example in fashion is using AI to track and predict what products to order and when to discount or replenish them. By analysing consumer data, AI can inform brands and retailers what colours or fabrics customers in specific countries are buying, as well as monitoring social media to identify mainstream trends.

“Every company in every industry should be paying very close attention to AI,” Martin Ford, author of 'Rise of the Robots: Technology and the Threat of the Jobless Future,' previously told BoF. “There is no limit to how far it can go.”

Companies such as Brunello Cucinelli have become known for putting ethical and human values at the heart of his company.

Cucinelli insists on a 90-minute break when workers can eat at a subsidised canteen that offers lunch for only a few euros and asks staff to leave work at 5.30pm and not send business-related emails after that. In addition, employees are offered a “cultural allowance” where the money they spend on culturally enriching activities, like going to an exhibition, is reimbursed. 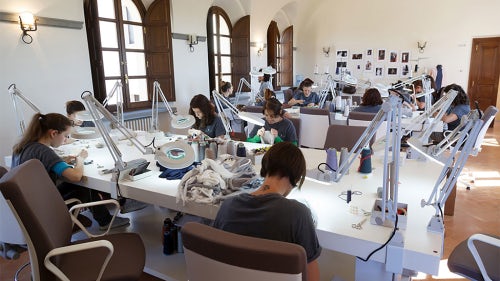 “People need their rest. If I make you overwork, I have stolen your soul,” the Italian fashion magnate told Bloomberg in November 2015.

Set ups like this work because millenials are looking for meaningful jobs, says Mandalah’s Peter. “They want jobs with meaning and purpose.”

Cucinelli, who also reinvests up to 20 percent of his profits into Solomeo, the village near Perugia where his company is based, has seen great rewards. Since its founding, the company has grown into one of the world’s most desirable luxury fashion brands and in the first six months of 2016, it saw revenues rise 9.7 percent to €219.8 million (about $245 million).

Gildo Zegna, chief executive of menswear company Ermenegildo Zegna Group, which holds a 3 percent stake, is also a fan of Cucinelli’s approach. “It was natural to become an investor,” Zegna said to Bloomberg. “We admire his philanthropic and humanistic capitalism.”

Few organisations have completely figured out the balance to achieving workplace flexibility and productivity. But what’s clear is that incremental steps towards a more flexible work culture can make a big difference in attracting and retaining more productive talent.

According to Haugen, one size does not fit all, so companies should think through and define how flexibility will work for them. “Survey employees to learn which types of flexibility would be most valuable to them and carefully think through all the potential organisational implications before executing new strategies,” she advises.

Haugen also suggests that companies support transparency and develop self-directed teams. “Create a safe environment for employees to come forward with their unique situations that could be solved with increased flexibility,” she says. “Then set clear expectations about what work must be done and by when — then allow teams to negotiate on how they can most effectively meet their collective work goals and personal needs.”

“You need to innovate because your customers demand it. The fashion industry is probably the biggest example of that,” says Peter. “These new forms of organisational structures and work environment leads to more innovation, more resilience, more disruption and are therefore essential to companies of the future.”

“Management should be prepared to nurture and grow an effective flexible work environment over time — it can’t be left to chance,” concludes Haugen.

There are few sectors of the economy that offer as wide and interesting a range of career opportunities as fashion. For more information, visit BoF Careers.