Major European luxury brands are placing bets on a September fashion month that is sure to be unlike any other, if it actually happens.

Major European luxury brands are placing bets on a September fashion month that is sure to be unlike any other, if it actually happens.

Fashion shows are back. Or are they? Earlier this year, as Covid-19 ripped through France and Italy, it seemed as though Europe’s fashion weeks would be cancelled, at least in their traditional format, for the rest of the year. Now, as lockdowns lift, major luxury brands like Chanel, Dior and Fendi are signalling their plans to stage physical shows this September.

In previous weeks, Gucci and Saint Laurent, both owned by the conglomerate Kering, have announced their intentions to skip fashion week this autumn and reshape their schedules for showing collections in a break with the conventional fashion calendar. But rival group LVMH, which owns Dior and Fendi, is likely to announce physical shows for more of its megabrands.

In part, the push for a traditional fashion week reflects the weakness of digital alternatives. London’s experiment with an online-only showcase earlier this month failed to deliver. And despite the promise of innovations liked Ermenegildo Zegna’s upcoming “phygital” show, few industry insiders are holding their breath for the July presentations that are meant to replace the haute couture and men’s fashion weeks typically held this time of year in Paris and Milan.

In some ways, fashion shows have been “phygital” for years, conceived to play online as well as in real life, with elaborate sets and performance elements deliberately designed as Insta-bait for influencers. And yet it’s incredibly hard to replace the underlying power of the physical event.

Rather than direct-to-consumer communications that can easily be digitised, fashion shows depend deeply on the live gathering of the “right” people — editors, buyers, celebrities, influencers and other tastemakers — to help conjure, capture, translate and transmit the cultural and emotional value that turns mere dresses into powerful objects of desire.

But September is shaping up to be a fashion season like no other.

Even the biggest brands have slashed their marketing budgets after months of store closures and a darkening economic picture that has crushed consumer demand for non-essential luxury goods. According to Bain, luxury sales are expected to contract by up to 35 percent this year. Then there’s the issue of international travel bans. This week, a draft document seen by The New York Times suggested that the European Union could bar Americans from visiting the bloc even as it reopens to other nationalities due to the country’s missteps in managing Covid-19.

As a result, September’s fashion weeks are likely to be smaller, more splintered and more local affairs with shows staged for fewer guests when it’s most convenient for brands. Some brands will surely dial up their digital strategies. Others may leverage the constraints to increase the exclusivity factor of shows that have, in recent years, become more democratised, though whether older senior editors will risk infection to attend remains a question.

Of course, fashion week also serves as a roving conference for industry professionals, who often use the time they spend together each season to exchange information and ideas, make deals and have a collective conversation on the direction of the market. Due to infection risk and budget cuts, September will surely come with far fewer cocktails, dinners and other events.

But perhaps most glaring will be the absence of many smaller labels. These brands, which often depend heavily on third-party retailers for distribution, have been hit hard by the pandemic, with cancelled orders and extended payment terms throwing them into survival mode or worse.

According to CNN, London Fashion Week is also expected to go forward in September. But earlier this year, the British Fashion Council, which organises the showcase, predicted that 35 percent of the country’s emerging labels would fail before the end of the summer. Across Europe, the smaller brands still standing are likely to skip the shows and focus on market week.

Indeed, September is likely to be a stark reminder of the deepening divide between fashion’s biggest brands — backed by large, well-capitalised strategic groups, which enjoy significant leverage with multi-brand retailers, mall owners, real estate developers, magazines, influencers and other key players in the fashion ecosystem — and everyone else.

In recent weeks, a chorus of independent labels has been pushing for significant changes to fashion’s “broken” system of developing, showing, delivering and discounting collections, which often disadvantages smaller, wholesale-dependent brands. But momentum seems to be slowing, as megabrands like Chanel throw their weight behind the traditional system and the likes of Gucci and Saint Laurent risk appearing out of step with the industry and ceding ground to competitors if they stick to their stated strategies and skip fashion week this autumn.

Of course, there could easily be a second spike in Covid-19 cases and another lockdown in the coming months. And though more major brands facing imminent logistical deadlines are placing bets on staging fashion week shows this autumn, it’s entirely possible that the whole thing could be cancelled only weeks or days before the event. See you in September? 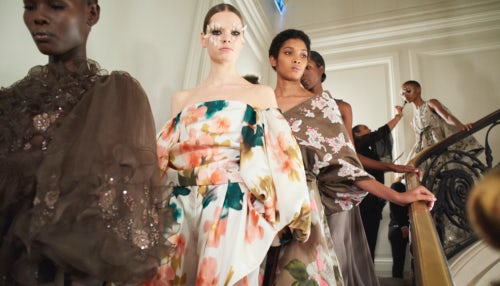 Valentino to present live couture collection. Creative Director Pierpaolo Piccioli will collaborate with photographer and digital artist Nick Knight to present the brand's autumn couture collection. The show will comprise digital elements, as well as a live physical presentation to take place on July 21st at Cinecittà Studios in Rome in the presence of a select number of fashion journalists.

Dior moves ahead with Cruise show and Jordan launch. The luxury brand is resuming its calendar of fashion shows, starting with Cruise 2021, which will be staged in Lecce, Italy on July 22nd. There will be no live audience at the show, but the event will be streamed online. Meanwhile, the brand's 'Air Dior' Jordan 1 Retro High sneakers are already commanding $12,000 on the resale market ahead of their official release on July 1st.

Yeezy and Gap partner on new collection. Kanye West’s Yeezy brand has struck a multi-year deal with Gap that will deliver a co-branded clothing line for men, women and children to the market in 2021. The move comes as Gap Inc. struggles to weather the pandemic, closing 3,300 stores and furloughing about 80,000 employees. The retailer's stocks have soared since the partnership's announcement.

Gucci hikes handbag prices to curb coronavirus hit. A report by Jefferies found price increases between 5 percent and 9 percent for the brand's $2,290 Dionysus and $2,980 Zumi bags in Italy, Britain and China. Gucci is not alone. Louis Vuitton and Chanel, too, have raised prices, seemingly to pad margins and help weather the pandemic, which has forced store closures and crushed consumer demand.

Valentino sues New York landlord. The luxury brand filed a complaint stating that its Fifth Avenue location was irreparably damaged, and no longer feasible for the company. Valentino was forced to shut its store as a result of lockdown measures in mid-March. Even after stores have reopened, the brand maintains that consumer confidence is too low and that the store is "impractical, unfeasible and no longer workable.” Valentino has reportedly written to quit its lease, but the landlord has not accepted the surrender.

Kohl's CEO says the pandemic is transforming its stores. The department store chain is making greater use of protective gear and curbside pickups as it prepares for a business cycle that’s significantly different from previous years. The pandemic has forced Kohl’s to expand its e-commerce business and rethink store operations in order to maintain the safety of staff and shoppers alike. Since reopening, sales have risen steadily to about three quarters of what they were last summer. 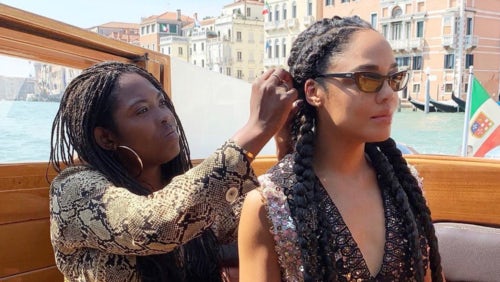 Black stylists form a collective for support and advocacy. Co-founded by Law Roach, Jason Rembert, and Lacy Redway, The Black Fashion & Beauty Collective will serve as a kind of “black glam union” for behind-the-scenes creatives. The collective will offer its members — people working on fashion, hair and beauty for celebrities and models — resources like career advancement initiatives for aspiring creatives. While the membership process has not yet been announced, the goal is to include as many people as possible.

L'Oréal scraps plastic packaging. L’Oréal has pledged to discontinue using non-recycled packaging by 2030 in a bid to become more sustainable. The cosmetics maker also said it would introduce greener products, including solid shampoos, to its flagship Garnier brand. L’Oréal also said it would reassess how it sources materials and cut back emissions at offices and factories. 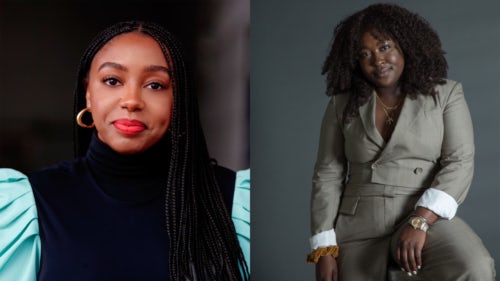 Lindsay Peoples Wagner and Sandrine Charles are the co-founders of the Black in Fashion Coalition | Source: Courtesy

Black industry leaders in the US form a new coalition. A group co-founded by Teen Vogue Editor-in-Chief Lindsay Peoples Wagner and publicist Sandrine Charles want to shift the conversation from “cancel culture” to “accountability culture” and will partner with companies to advance Black fashion professionals and release a yearly index score measuring diversity. The coalition aims to work with major corporations, media companies, emerging brands and trade organisations like The Council of Fashion Designers of America.

Rachel Shechtman steps down as Macy’s chief brand experience officer. The move follows a series of departures at the American department store chain, including those of former president Hal Lawton and finance chief Paula Price. Shechtman’s exit comes as Macy’s announced it will be cutting an extra 3,900 jobs.

Pierre A. M’Pelé named senior editor at Love magazine. The bi-annual British style magazine Love has appointed Pierre A. M’Pelé, also known by his online handle Pam Boy, as its senior editor. In his new role, M’Pelé, who has been writing for the publication over the last two years and has previously contributed to WWD and i-D, will be working across Love’s print and digital products.

More apparel brands join Facebook boycott. Brands including REI, The North Face, Patagonia, Arc’teryx and Eddie Bauer have pledged to boycott Facebook Inc. after the social media giant decreased the number of human content moderators that monitor hateful content on the platform. The brands are pulling their advertisements for July on each of the company’s platforms in line with a call to action that six organisations including the NAACP and the Anti-Defamation League initiated. But long-term, drawing a firm line between a company’s values and a powerful marketing channel may prove challenging.