The Californian cashmere designer has built a business out of his chic, unbranded sweaters and luxury blankets.

The surprise winner of the CFDA/Vogue Fashion Fund award in 2012, Greg Chait is the man behind LA-based cashmere brand The Elder Statesman. Thanks to Chait’s devotion to quality and craftsmanship, mixed with his effortless California cool, the brand is now stocked in some of the most exclusive boutiques around the world.

Previously, Chait helped establish Australian denim brand Ksubi in the United States, but in 2007, while hanging out Venice Beach, he fell in love with a cashmere blanket his friend had lent him. He couldn’t find one anywhere, so he made some of his own. LA’s Maxfield boutique snapped them up to sell the next day and Chait jumped on a plane to Paris without a single sales appointment lined up. A week later, The Elder Statesman had picked up a dozen retail accounts, including prestigious retailers such as Barneys and Colette.

Exceptional quality and supreme craftsmanship is at the heart of The Elder Statesman’s USP. The cashmere is globally sourced, coming from countries including Afghanistan, Mongolia and Italy, often for as much as $500 per kilo, before being spun by Chait's own team of expert craftsmen — although some is sent as far away as Central America to be woven. A sweater starts from around $800, while the blankets begin at $2,000. In the 2010s, as brands like The Row and Phoebe Philo ’s Céline took centre stage, Chait was well placed to capitalise on the rise of chic simplicity combined with exclusivity. Sweaters are unbranded, product runs are usually limited to 50 units and Chait creates each collection for his stockists individually – no two boutiques have the same assortment.

The Elder Statesman has since expanded its offering to knitted and woven accessories of all kinds, optical, children’s items, and a robust selection of home goods.

Since the company’s launch, it has expanded into apparel and accessories for men, women and children and today products are stocked in more than 75 stores worldwide. In November 2014, Chait opened his first flagship off LA’s Melrose Avenue.

Chait lives in Malibu, California with his daughter. 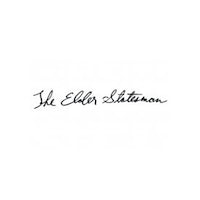