SHANGHAI, China — In the shadow of the Huaiyu Mountains, nestled deep within the evergreens that surround Jingdezhen, where the air is opaque with glaucous subtropical mist, 72 pairs of hands work in perfect harmony at Master Lu’s workshop. Each pair is responsible for a unique step in the creation of the finest eggshell-porcelain bowls. Floating over this thousand-year-old process are the musical chimes given off by the bowls as the trained ear of a single dedicated craftsman tests the wares for perfect symmetry.

The guardian of a family secret kept for centuries, Lu is the only person in the world who knows the exact proportions of water, clay and stones that must be mixed to create such fine porcelain, using processes first perfected during the Ming dynasty. Translucent even in natural light, Lu’s eggshell porcelain bowls, just one millimeter thick, are breathtakingly fragile. And, tragically, the know-how to create these bowls is every bit as fragile as the product itself.

That this precarious thread of knowledge survived both the Great Leap Forward and the Cultural Revolution of Maoist China, nationwide purges of the icons of China’s imperial past and the trappings of the elite who ruled it, defies the odds. Indeed, in China’s bid for modernity and equality, the nation’s cultural identity was brutally replaced with a political ideology, while artistic appreciation, accumulated through five thousand years of production and consumption in the world’s largest economy, was forcibly prevented from being passed down to the next generation.

“Over the last 30 years we had huge economic development, but we have sacrificed a lot of culture and heritage. People had no time, energy, money or mental freedom to look for excellence, for beauty, for quality,” said Jiang Qiong’er, chief executive, creative director and part owner of Shang Xia, the luxury lifestyle brand she developed in collaboration with Hermès. “We had a broken connection between our tradition, our history and our future.”

But, today, despite China’s nominal self-identification as a communist state, the loosening regulation of private enterprise in the country has generated personal wealth at a rate and scale not seen before, creating a rising class of sophisticated consumers eager to reconnect with their cultural heritage. “There is a new trend that started in the last five years, a new cultural phenomenon, allowing a project like Shang Xia to be born. If Shang Xia was born ten years ago, it was too early. More and more, the young people, due to globalisation, want a cultural Chinese identity that is contemporary and modern,” said Jiang.

Founded in 2008, Shang Xia, which sells fashion, accessories and homeware, including Master Lu's eggshell porcelain, and operates a boutique on the Rue de Sèvres in Paris, as well as stores in Shanghai and Beijing, aims to the bridge the chasm between ancient Chinese craft and today’s luxury consumers. Hermès has invested significantly in the venture, taking a 90-percent stake in the brand and spending on average €10 million per year in a bid to build a Chinese luxury brand with the same standard of craft that lies at the heart of its own brand. Shang Xia expects to cross over into profitability in 2016. 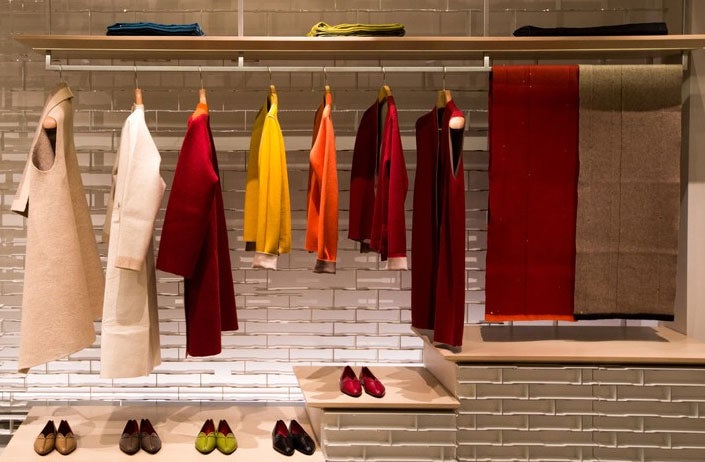 Jiang began by canvassing a group of museum experts and university professors. Equipped with their suggestions, she travelled the regions of China to find the workshops and ateliers that still possessed the know-how to produce Chinese goods at the very pinnacle of luxury production. “The first step is learning. When we have some experience, then we can go further,” she said. “I think the best protection for the preservation of craftsmanship is innovation. For example some of our garments are made of cashmere felt, but that know-how comes from the nomad people that used wool felt. In urban life, wool is too heavy, so we replaced the raw material.”

In September 2014, Christie’s held an auction of contemporary Chinese design featuring a number of Shang Xia products, including carbon fibre chairs, overlain in imperial lacquer, an embodiment of the brand’s approach. “Today, in Shang Xia, we integrate around 30 different know-hows. It is a permanent process to keep discovering new craftsmanship and using craftsmanship in a deeper way to find new ways to invite innovation into heritage. We should do something that 500 years ago they could not.”

“Shang Xia is one of the first to translate protection and preservation through contemporary design and innovation. The best way is not to keep craft in the museums; we need to translate this traditional know-how and culture in a contemporary way. Only if traditional culture can become contemporary culture, can the past be reconnected with the young generation.”