A Wait-and-See Approach to NYFW: Men’s

The impact of the inaugural event remains to be seen, but buyers and designers alike are bullish on its potential.

A Wait-and-See Approach to NYFW: Men’s

The impact of the inaugural event remains to be seen, but buyers and designers alike are bullish on its potential.

NEW YORK, United States — Back in the late 1980s and early 1990s, New York hosted its very own men’s fashion week, which normally took place in the late summer. “While much of the high glamour of women's fashion shows was absent, there was plenty of glitz, perhaps too much for the average man,” wrote one New York Times reporter in August of 1989. “One designer even showed plunging necklines on the runway, a kind of mohair chest look. No one panted.”

Delightfully snarky reviews aside, the tradition of a New York men’s fashion week died with the rise of the international fashion week calendar. For the past several years, menswear designers based in the United States have either shown abroad, or in September alongside their womenswear counterparts — long after the men’s buying season is over.

This week, they’ve been afforded another option with the launch of New York Fashion Week: Men’s, a four-day event running from the 13th to the 16th of July, featuring more than 60 American designers. “Steven really wanted this,” Council of Fashion Designers of America president Diane Von Furstenberg said at a press conference on Monday night, with New York City’s deputy mayor Alicia Glen standing beside her. The city says that New York Fashion Week has a total economic impact of $887 million each year, and it’s hoping to build on that with the men’s shows.

“Steven” is Steven Kolb, chief executive of the CFDA and the mastermind behind this new initiative. Kolb has had a dedicated men’s fashion week on the brain for years, thanks in part to urging from the CFDA’s members. “I’ve been rallying to do a real men’s fashion week since I started my company in 2000,” said designer John Varvatos, who first discussed the possibility with Kolb when the executive joined the CFDA in 2006.

But it was a conversation with Bruce Pask, Bergdorf Goodman’s men’s fashion director, which took place two years ago that accelerated things. (At the time, Pask was men’s fashion director at T: The New York Times Style magazine.) “The most important thing is that we’re getting the New York menswear market in line with the international schedule,” said Pask, who hosted a Thom Browne Spring 2016 preview party at Bergdorf Goodman on Tuesday night. “There was a significant component to NYFW, but that happens a couple of months after our buyers are finished and editorial calendars are filled and planned.” 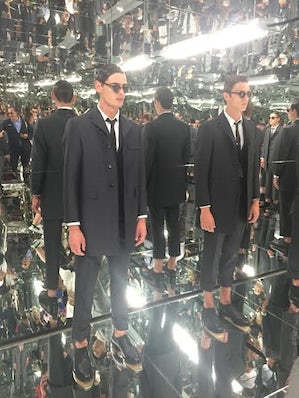 The goal, of course, is to make it easier for American menswear designers to promote their goods, as London Collections: Men has done for that city over the past few seasons. “While this idea predates the London collections, we looked at them,” Kolb said. “But we didn’t want to have London in New York. We wanted to have New York in New York.”

Thus far, New York Fashion Week: Men’s has attracted top brands like John Varvatos, Tommy Hilfiger, Coach, Thom Browne and Public School. However, many are staging low-key presentations and the showcase has yet to net a top-tier show from a megabrand capable of anchoring the week and drawing international press and buyers to the event, as Burberry did for London Collections: Men when it shifted its high-end Prorsum show from Milan to London in 2012. American megabrand Ralph Lauren is presenting its Polo Ralph Lauren collection in New York this week, but decided to continue showing its high-end Purple Label collection during Milan men’s fashion week in June.

The CFDA estimates that it will host about 3,000 attendees this week at Skylight’s Clarkson Square studios, with 500 press and retailers officially registered — a handful of which have travelled from abroad. Much of the international press was sponsored by the CFDA, with help from advertisers and brands, although Kolb said the end goal is to “get them to the point where they come on their own.” This is the first time the CFDA has produced a fashion week on its own, and Kolb and his team hustled to secure the right sponsors, with Amazon Fashion headlining and American companies like Cadillac and Shinola making significant contributions. “All the brands make sense,” Kolb said. “We’re not selling dog food.” 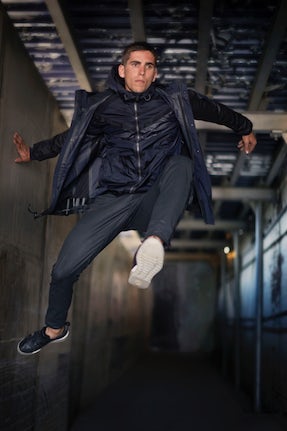 For designer Todd Snyder, who launched his namesake label in 2011, the four-day event means cutting through the noise of the crowded women’s schedule. “It’s good not to have to compete with the women’s brands [for attendees],” said Snyder, who also began selling his wares through a showroom in Paris and a press agent in London this season. (The designer estimates that 45 percent of his spring sales will come from U.S retailers, 45 percent from Japan and 10 percent from Europe, which is a new market for him.)

Celebrities, too, are flooding the front row. At Snyder’s show on Tuesday, the line-up included Christian Slater, Joe Jonas, and the Orlando Magic's Victor Oladipo. NBA star Dwyane Wade and the New York Giants’ Victor Cruz have also been making the rounds.

The shows officially openedon Tuesday morning with Thom Browne — who had already presented his main collection in Paris. They will close with Varvatos' on Thursday night, who chose to move his runway show from Milan to New York. Indeed, the schedule is a mix of designers who will be showing their collections for the first time — including Rag & Bone and Tomas Maier — and those who have already made the rounds in Europe. While Italo Zucchelli, the creative director of Calvin Klein’s men’s collection has shown in New York in the past, this season the brand chose to host a runway show in Milan and present the collection on mannequins in New York. As for whether he’d bring the whole operation back to the States now that there’s an organised men’s fashion week under way? “It’s a big question. It depends,” the designer said on Tuesday. “There are business reasons. There are so many reasons. Fashion is a complicated matter.” 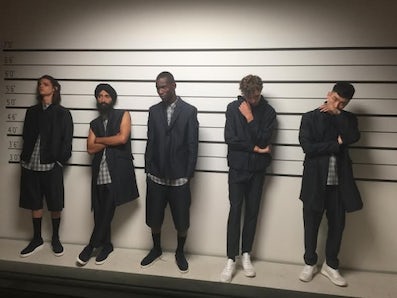 Perhaps the designers who might benefit most from New York Fashion Week: Men’s are the upstarts who cannot afford to present or host market appointments abroad in a meaningful way. The international buyers in town for the shows seem to be most eager, more than anything, to find the country’s next Public School or Rag & Bone, which both debuted their Spring 2016 collections on Tuesday. “There’s so much potential in the U.S menswear market,” said Mr. Porter buying and sales director, Toby Bateman. “For me, and any other international commercial people, for it to be worthwhile you’ve got to come away with something new. There’s got to be a reason to come back.”

Whether buyers will find that reason remains to be seen. “I think the greatest thing about this whole initiative is the platform that it’s going to give to some of the younger brands, to stand up and show people what they do,” Rag & Bone designer David Neville said on Tuesday. The most anticipated emerging designer shows include the Los Angeles-based John Elliott + Co., and the New York-based Orley, which has made a name for itself in knitwear. For the Orley family — Alex, Matthew, and Matthew’s wife, Samantha — there are benefits and drawbacks to the new format. “We have to be on a European schedule because we work with a lot of Italian mills,” said Samantha at Amazon’s launch party in Williamsburg on Monday night. “There allows there to be more business behind [the show], and not just a press [moment].”

However, for a young brand that shows both men’s and women’s, a second show means added costs. “I think that this is going to do so much for us,” Matthew said. “On the flipside of that, as we are trying to launch men’s and women’s, the thought of doing four presentations is so overwhelming. From a financial standpoint, it makes more sense to show them together. But this allows us to get the collection in front of the people who need to see it,” he continued.

There’s also the matter of fashion fatigue, which plagues buyers and editors attending trade shows in what now feels like every month of the year. For now, though, an organised schedule still seems to be the best solution. “If there’s something better, I don’t know what something better is,” Kolb said. “I don’t believe in fatigue. We have to keep the industry going. It’s an international world that we live in, and you can’t do what we do without traveling,” added Neiman Marcus buying director Ken Downing.

The next New York Fashion Week: Men’s is scheduled for January 28th to 31st 2016. While it will take a few seasons to determine its significance in the international calendar, the attention the event has already brought to American men’s fashion is undeniable. “I think it has broader cultural ramifications as well,” noted Pask. “It affects education. Young designers in schools can see the viability of being in menswear.”