The French luxury company bounced back faster than expected last year after shutting down production of its famed Birkin and Kelly bags for more than a month. 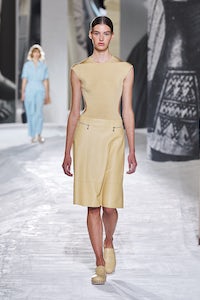 The French luxury company bounced back faster than expected last year after shutting down production of its famed Birkin and Kelly bags for more than a month.

Hermès reported annual results that beat estimates Friday, boosted by surging sales in Asian markets like China at the end of the year.

Hermès was hit hard by store closures and production delays during the first half, with leather goods production facing a steep setback as the company shut down its French workshops completely for more than a month.

The company returned to year-on-year growth over the summer, however, and sales then accelerated to jump by 16 percent in the fourth-quarter. Sales were particularly strong in Asia, rising by nearly 50 percent in markets excluding Japan, which the company accounts for separately.

Operating profitability remained relatively steady for the year despite the pandemic, declining to 31 percent of sales compared to a 34 percent margin in 2019.

Hermès’ performance underscores the widening gap between companies who have bounced back quickly during the pandemic and those that continue to fall behind. LVMH’s fashion division and Moncler have also accelerated in recent months, with sales rising by 18 and 9 percent respectively in the fourth quarter. By contrast, Gucci- and Saint Laurent-owner Kering reported a 17 percent drop in sales, while retail sales at trench-coat maker Burberry fell by 5 percent.

Hermès’ fourth-quarter sales were powered by growth in Asia, as well as a strong increase in online sales that helped cushion the blow from collapsing tourist flows in other regions. Sales in Europe fell 10 percent, while the U.S. was roughly flat.

Hermès became the first luxury brand to sell online starting in 2000. The brand rolled out revamped e-commerce sites in 2017 and 2018 that made it easier to scroll through products ranging from beach towels to enameled bracelets.

”The structural changes were ones we had recognised before, namely the rising importance of Asian economies and digital,” chief executive Axel Dumas said in a presentation for investors. “We were ready and we knew how to absorb the growth there with our systems.”

In other news
Retail