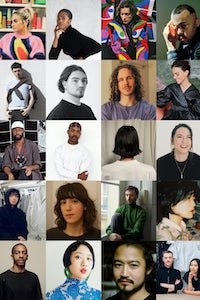 The conglomerate created a digital platform to showcase the semi-finalists’ collections, which will be available on LVMH Prize’s website from April 6 to 11. For the first time visitors using the platform will be able to vote for their favourite designer.

Semi-finalists include Christopher John Rogers, who won the 2019 CFDA/Vogue Fashion Fund and Charles de Vilmorin, creative director of Simone Rocha, among several new emerging talents including Saul Nash and Bianca Saunders. The international annual prize attracted over 1,900 candidates and for the first time among the 20 semi-finalists include designers from Albania (Nensi Dojaka) and Colombia (Kika Vargas).

”This semi-final will be entirely digital, and we wanted it to be open to as many people as possible: for the first time, the LVMH Prize will give the floor to the public,” said executive vice president of Louis Vuitton and founder of the LVMH Prize Delphine Arnault.

The winner will receive a €300,000 prize and mentorship for a year within LVMH. Similarly, the winner of the Karl Lagerfeld prize will receive €150,000 and a year of mentorship.

In other news
Global Markets