The London-based womenswear designer beat out a shortlist of nine finalists for the prestigious fashion prize. 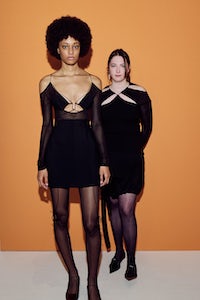 The London-based womenswear designer beat out a shortlist of nine finalists for the prestigious fashion prize.

Albanian designer Nensi Dojaka, whose London-based label is known for its mini-dresses and intimates with geometric patches of neutral tulle, organza and jersey, is the winner of this year’s LVMH Prize. Dojaka will receive a €300,000 ($355,905) grant and a year-long mentorship from executives at the French luxury conglomerate.

Meanwhile, Colm Dillane of the New York-based brand Kid Super, Shanghai-based Rui Zhou of the genderless label Rui and South African Lukhanyo Mdingi are the recipients of the Karl Lagerfeld Special Jury Prize and will each receive €150,000 as well as a one-year mentorship programme from a dedicated LVMH team.

This year’s prize is perhaps its most global edition yet. Vargas and Dojaka are the first finalists to hail from Colombia and Albania respectively, while Zhou is the first Chinese designer to win the Karl Lagerfeld Prize. To add to many firsts, the public took part by voting for favourites in the semi-final stage and the jury requested to award three Karl Lagerfeld Prizes in an unprecedented move.

“We were all quite surprised by the jury’s decision to have three winners for the Karl Lagerfeld Prize, but it just goes to show the lengths they go to to support emerging talent,” Mdingi told BoF. “It’s the mentorship we want more than anything else,” he said, adding that he plans on consulting his mentors to utilise the prize money and grow his business organically.

Dojaka was speechless when actress Isabelle Huppert announced she had won the main prize. “I didn’t even envision it ...I’m very happy because it’s going to make a big difference to my brand,” she said.

The grant will go towards growing her team (which currently consists of one full-timer and several freelancers) and expanding her offering into categories like accessories and knitwear, which have long been of interest. Next week, she’ll showcase her fourth collection during London Fashion Week. “I’m sticking to what I do best, but I want to make clothes that are more easy to wear,” she said.

In the long-term, Dojaka’s goal is to build a world around her brand and its recognisable signatures, which have already won her fans in the likes of Rihanna and Bella Hadid, to appeal to a wider audience.

Things seem to be going to plan: earlier this year, Lyst revealed that Dojaka’s black 90′s-inspired mini dress made it to the platform’s Top 10 hottest products ranking for Q1 2021. “People are looking for clothes like this, so I think it’s working,” she said.

Plenty of designers have learned the hard way that receiving a major award isn’t an instant ticket to success. Here’s how some past winners are putting their winnings to good use.