Looking Back at London

LONDON, United Kingdom — The brilliant and the brash; the creative and the crass: over the years, London fashion designers have come in all shapes and sizes. New names flash to prominence. And while some build sustainable businesses, others fade away almost as quickly as they were born. But at any given moment, this fashion capital is eclectic like no other.

Precious few designers in London can cut a perfectly made coat. However, this season, current wunderkind Christopher Kane gave us some beautiful examples in red and blue velvet. Kane has so far amply rewarded his backers at Kering by becoming a designer with the confidence to be taken increasingly seriously on the international stage. But I do hope he does not lose his unique look in his efforts to take on the big players. 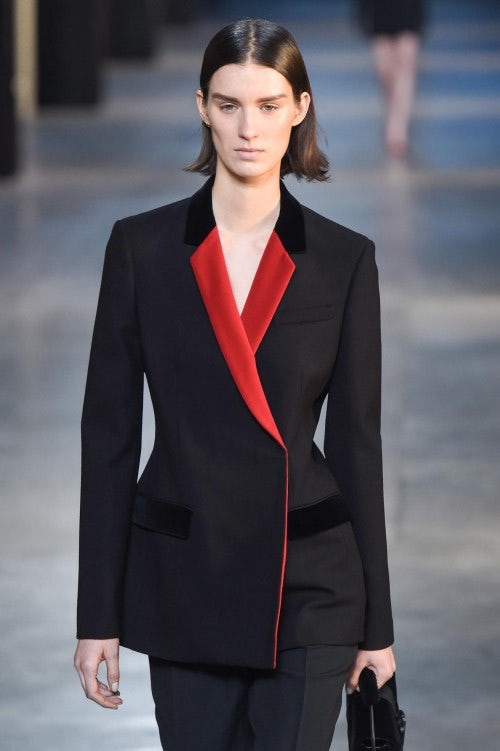 Christopher Bailey has already done more than that, of course, having helped turn Burberry into one of the world’s top international fashion brands, in part, by creating uniquely Burberry looks that are cohesive and on-brand, whilst changing just enough of the ingredients every season. This time we had a fringe attack: fringed stoles as big and luxurious as blankets, fringed scarves and suede fringe in traditional trench-cut coats in — yes! — suede as well as capes made entirely of the material. Nothing revolutionary. No scaring the horses. Just a very clever amalgam of the known and loved and the very fresh and young. That came with the colours and the embroidered and mirrored dresses and skirts. As always with Bailey, it was all very cleverly calibrated to send every member of the very large show audience out into the cold with a cosy warm feeling. 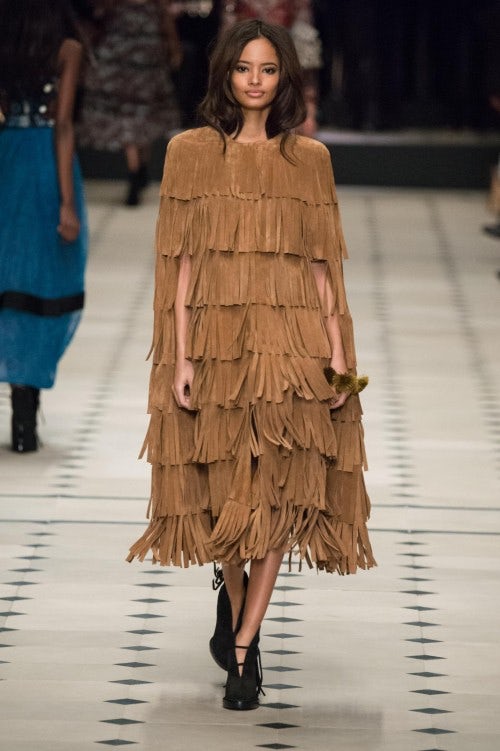 I had felt that Mary Katrantzou was running out of steam with her baroquely over-the-top plays with pattern, so I was delighted to see how intelligently she has moved on without losing her unique vision. All right, there was a superficial hint of Miu Miu in her show this season, but that is no bad homage to pay, after all. All I can say is that Burne Jones, William Morris and the Pre-Raphaelites would have approved as much of Mary Katrantzou's subtler Victorian colours. Indeed, this time around, she included that favourite of Victorian painters, Hooker's Green, praised by the Poet Laureate John Betjeman. I enjoyed this show but with one exception. I felt that the long skirts that burst onto a huge ruff half way down the calf were ugly, cumbersome, not of our time and, frankly, maladroit. Mary is a good designer, yet she has a ways to go still, I believe. I wasn’t too sure about her use of sulphur yellow this season. But anyone who knows this talented woman's work also knows that her enthusiasm is what makes her runway so dynamic and memorable. 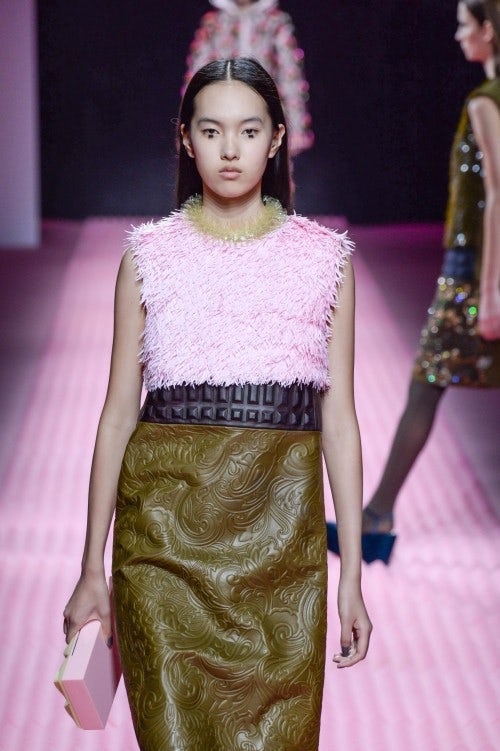 Jonathan Saunders is another colourist. His patterns this season — interspersed with traditional floating cloud shapes from Chinese antique paintings — were highly covetable. Intricacies of cut and form are not his thing and he wisely keeps his shapes simple. But colour is a language he understands very well and this season, when sharp, bright colours, are bouncing down virtually every runway in London, his were refreshingly confident and jolly and very true to the DNA of the brand. 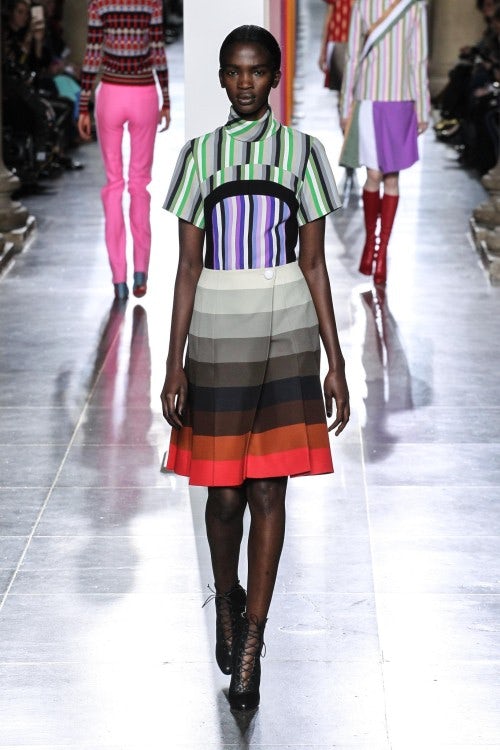 Matthew Williamson is also an exceptional colourist. He learned all about it years ago by working with craftsmen in India and the skills he absorbed then are still with him today. This outing, was all about soft berry colours, close, overall patterns in silks and satins and a lot of fun fur, which is everywhere this season. No danger of him going broke, which, it must be said, is the Sword of Damocles still hanging over too many London designers if the gossip at the shows is to be believed.

Another designer whose collection suggests she is not beating the wolf from the door with a bolt of Chinese silk is Alice Temperley. Fiercely independent, she sails ahead with little regard for what her fellow designers are producing and is entirely confident in her own aesthetic, which, I guess, can be summed up as expensive glamour, not something with which London is not normally associated. For my taste, it sometimes becomes a little too rich, but the strength of her vision has matured immensely in the last few collections and given her an international profile. This season's offering was consummately confident and very beautiful. Absolutely not aimed at the teenage fashionistas as so much in London seems to be, Temperley's clothes are now the province of those who are very rich and love real luxury, a growing market that could well leave some young designers behind. 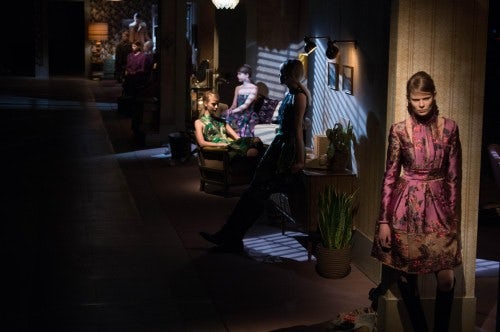 So, next to Erdem, who is fanatically loved by his supporters for very obvious reasons. If ever a designer knew how to make women look pretty and lady-like yet modern, he is the one. He is an intellectual designer of the sort rarely thrown up by London's fashion system. A logical thinker and a good strategist, Erdem seems to have evolved maybe three or four basic shapes which he can change by subtle (and Erdem is nothing if not subtle) tweaks to volume and length whilst leaving himself plenty of scope for his great forte, which is colour and embroidery. Think pinks, mauves, blues and wondrous greens. He really does know how to do it; a future contender for Oscar de la Renta, surely.

JW Anderson has very quickly grown into a designer who can risk giving us his viewpoint at full strength, knowing that those who do not get it the first time had better hurry up and get with it. I thought he hit a new high this season and would rate his show as second to only one. We do not often get a rush of exhilaration on the runways of London. That is what we expect from Paris. But JW gave us that, and more, in a show that rushed along with all the energy, power and speed of a Lamborghini at full throttle. One blink and you missed at least three dresses. Behind the speed was a mixture of (almost) vulgarity, slickness, kingfisher colours, surfaces that looked as if they had been picked up in a scrapyard and then lovingly treated until they became a sexy silver skirt. The entire show seemed iridescent to me and I loved it. This man is brimming over with unique talent. 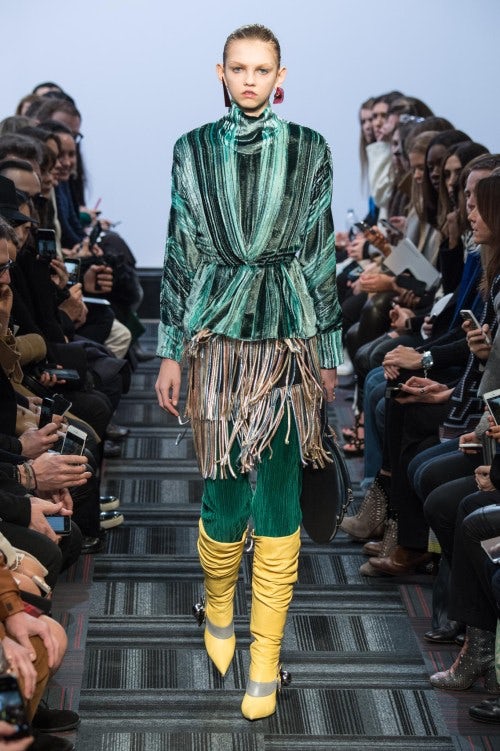 Finally, to my favourite show as well as the most disappointing one. Both hinged on production. One got it right. The other did not.

We’ll begin with the disappointment. Thomas Tait is the most intellectual and probably the most creatively gifted designer working in London today. He has shown his strength by winning the LVMH Prize against a strong line-up of contenders from across the globe. We are talking of a world-class figure here. So, why, oh, why did he opt to show his collection in such a disastrous way, such that we could see virtually nothing of the clothes? It all began very excitingly with clashing sounds like the blows of a huge mechanical hammer. When the sounds reached a climax, the lights went up. Or, rather, strips of lighting illuminated narrow pathways for the models to walk along. Everything else was pitch black, however, with the result that we saw a model for about four seconds before she moved out of the light and into the dark again. I am sure that I was not the only one to close his notebook in despair.

The event of the week was The Return of The Native, at Gareth Pugh. I was excited in anticipation and the reality did not let me down. The show was held in the cavernous Raphael room at the Victoria & Albert Museum. The presentation space was empty apart from a huge screen which showed a woman with long blonde hair toying menacingly with a large pair of scissors with which she eventually began hacking off her hair. She then covered herself with blood, making a Cross of Saint George on her face. Then came the models, all in black, some wearing black helmets, others with high leather ruffs, many with collars like parkas and all in unrelieved black clothes cut with razor-sharp precision. Indeed, the precision with which the long skirts swept to the floor was worthy of Cristóbal Balenciaga. Meanwhile, as the soundtrack played noises from football stands, the Joan of Arc-like figure in the video began to burn. An allegory? A fantasy? Who knows? But it was enough to show us that Pugh is a talent as strong as Alexander McQueen and I hope people do not insult him with labels like “the new McQueen.” This designer is entirely his own man who can, with the right backing, stand at the head of London fashion. 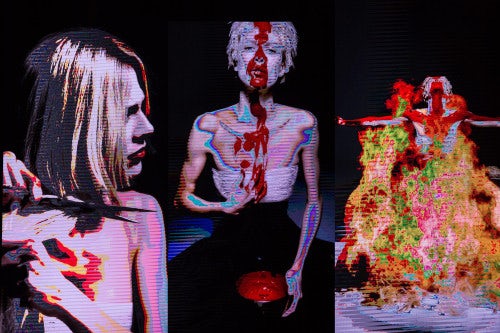