The Death of Fashion Shows? Not So Fast.

‘I come to praise shows, not to bury them,’ writes Tim Blanks as he kicks off a journey through his top fashion shows of all-time. 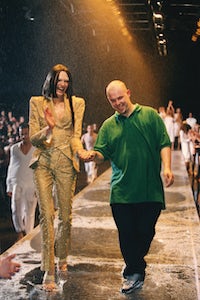 The Death of Fashion Shows? Not So Fast.

‘I come to praise shows, not to bury them,’ writes Tim Blanks as he kicks off a journey through his top fashion shows of all-time.

LONDON, United Kingdom — In my 35-year experience of fashion, The Show has always been the thing. Every-thing, in fact, from a small but perfectly formed moment to a sweeping spectacle for the ages. It was my outsider’s way in, equal parts invitation, inspiration and celebration. It was also the most vital distillation of a designer’s point of view, of the story of a season, of fashion’s every-so-often collision with the zeitgeist.

But despite the announcement of European fashion weeks this September, The Show, at least for the moment and as I have known and loved it, is dead, one more casualty of the pandemic that promises chaos-cum-change to established orders everywhere. A growing constituency will not mourn it. In a world confronted by social, economic, health and climate crises, The Show has been pilloried as another drain on precious resources, a curio, an irrelevance even. Holding that thought, lockdown has left me — who, through a happy accident rather than grand design, has spent more than half his life sitting through thousands upon thousands of shows, filming some, writing about others — to revel in my own irrelevance. And in that twilight state, I’ve been brooding on my own personal history with The Show. All forms of human life were there: the beautiful, the hideous, the reactionary, the revolutionary, the assured, the ambiguous, the ass-paralysing.

Diana Vreeland, the enduring template of the fashion editor, memorably wrote about a Balenciaga presentation in the early 60s where “everyone was going up in foam and thunder.” Twenty-five years later, I saw Vreeland at a Geoffrey Beene show in the Plaza Hotel in New York. If it wasn’t exactly foam and thunder, it was at least a cloudburst of emotion that swept the audience. The first time I saw tears, and I marvelled at such a reaction. Eventually, I too would feel similarly pricked, when the sound and vision would nudge me into overload, like the climax of a favourite film, or the last plangent chords of the soundtrack of my life.

I wanted to revisit these moments, review them anew, so that’s what I’m going to do over the next while, one every Friday, when I would once have been sitting by runways in the real world. I thought I’d start at the beginning, with Yves Saint Laurent’s haute couture collection for Spring 1988, the first show I ever covered in Paris. Then I think I will follow a pretty random and entirely personal selection, some chosen because they have a deep and meaningful social resonance (a Gaultier, a McQueen, a Rick Owens), others because they evoke a particularly happy memory (Galliano, say, or Mugler, or Dries Van Noten). It’s an evolutionary spectrum. Hard to fathom now that you’d once wait months to see any kind of visual record of the season you’d just sat through, and then it would be a page of thumbnails in one of those hefty collezione things out of Italy. A show would have to live in memory (or in the sketches or scribbles in a notebook) in a way that has since been thoroughly supplanted by digitalis, and the overwhelming demands of commerce and as-it-happens content creation.

A fashion show can be something so profoundly ceremonial that it attains the peculiar power of an occult ritual.

I can appreciate why there are people who feel the arc has been devolutionary, rather than evolutionary, but I’m not one of those used-to-be-better types. True, the question I’ve been asked more than any other is how I’ve managed to sustain my interest over such a long stretch of time. Also true, fashion isn’t as infinite as quantum physics. Still, I have hardly ever been bored by The Show: tested, yes, but in half an hour, I’ll be somewhere else, and a world away. I can’t make art or movies or music and I’m fascinated by people who can, even when what they produce is dreadful. Same with fashion. They’re all mysteries I’ve never felt compelled to solve. Who needs quantum physics when infinite patience is your most virtuous self?

So, I come to praise The Show, not to bury it. Anyway, rumours of its death are clearly exaggerated. The coming weeks will see a wave of digital simulacra, and there is hubbub about physical get-togethers in September, Second Wave willing. So, consider present circumstances a state of suspended animation, like a beauty that’s sleeping. I do know this: when it wakes, it will be a very different creature. For instance, my friend Jamie in New York is working with a company called Sensorium, who are trying to perfect the virtual fashion show with a multi-pronged approach that embraces traditional video and stills, 3D motion capture and 3D “photogrammetry.” They talk about “transcending the physical runway” — I guess they have to, don’t they? — but intriguingly, they also emphasise “presence,” which I take to mean the feeling of actually being somewhere. VR’s genuine ability to embed you in an alternate reality was devastatingly brought home to me by Alejandro González Iñárritu’s Carne y Arena, a short film following a group of migrants as they cross the Mexican border into the US. The sensation of sheer physical terror was jolting.

The idea of bringing a similarly potent degree of immersive emotional engagement to bear on a VR alternative to the familiar show format obviously suggests all sorts of dazzling technical possibilities. But, in my role as booster or apologist or nostalgist, I’ll say that the primal element that connects the wealth of shows I’ve seen over the years is the focused physicality of an audience of people gathered together in a theatre, a museum, a ballroom, a garden, an underground carpark, an abandoned coal mine or a cave to take part in something so profoundly ceremonial that it can, at its pinnacle, attain the peculiar power of an occult ritual. And you don’t need a budget of millions to spark this effect. Two words: Helmut Lang. I chose his last ever show because, though no one knew it at the time, it had the wonderful feeling of heading somewhere new. Which is exactly what Helmut did, though he left fashion behind to do it. So, hindsight inevitably colours my re-visit.

I did toy with the idea of projecting myself back into the past, into the purity of seeing the thing for the first time, but that required more of a performance than I’m capable of, to un-see everything that’s happened since. Besides, hindsight is hella fun. I’ve always wanted to know what happened next: read the last page, skip to the last episode, and then track back, fore-armed with the future. But what does happen next for The Show? By the time we can get bums on seats again, will fashion have ceremonialised another way to present itself? Or — to inject a pragmatic note of the utilitarian — to generate that all-important content? After all, there is an industry that needs servicing.

Time will tell. For the moment, I’m just going to have to poke around in this grab-bag of golden oldies and maybe someone else will winkle out ways in which the past can seed a glorious future. I’m only happy and grateful I was there to see it.

The End of the (Fashion) World as We Know It

Who Will Win the Digital Fashion Week Battle?