Covid-19 has buried the tailored suit, giving way not to the laziness of sweatpants, but to a new blend of comfort and elegance, reports Angelo Flaccavento.

Covid-19 has buried the tailored suit, giving way not to the laziness of sweatpants, but to a new blend of comfort and elegance, reports Angelo Flaccavento.

“Back to where it all started,” read the title of the live Giorgio Armani show that closed Milan fashion week. The show took place at 21 Via Borgonuovo, where, from 1984 to 2000, Armani staged the many memorable shows that propelled his idea of soft tailoring and masculine sensuality worldwide, creating a new visual template for the modern man. His latest collection was just as soft: a charming and softly elegant reiteration of the brand’s codes.

Times have changed, however, and now bolts of bright colours are part of the mix. It felt like a message of sorts that summed up the spirit of the season: an urge for physical life and moving bodies after a year of crisis, melded with the aesthetic moment of the late 70s and early 80s, when men’s ready-to-wear was invented here in Milan with soft deconstruction, neutral colours and a new sensuality. Back then, Milano was the lighthouse spreading newness the world over. Today, it aspires to regain that role. It might happen, but the still mostly digital calendar lacked frisson, apart from the usual suspects.

Effortlessness was the keyword this week, and with that the idea of a new, milder kind of formality that consisted in matching tops and bottoms, uniform-style, ditching any kind of traditional jacket. The pandemic has made the tailored suit, not to mention the necktie, feel like a relic of the past. This resulted, not in the laziness of tracksuits, but in a resurgence of thoughtful softness: comfort that was not at odds with propriety.

At Ermenegildo Zegna, Alessandro Sartori delivered his most accomplished and convincing collection since his appointment in 2017. Six months after The (Re)Set, he labelled this season’s workwear-inspired, kimono-fluid shapes and organic colour palette The (New) Set, seemingly aware of how often and how needlessly the word “new” is used in fashion. Sartori’s work for Zegna, a temple of formality, was groundbreakingly new, but in the subtlest of ways. By translating the sartorial and fabric-based know-how of Zegna into fluid shapes and either dry or lived-in textures, Sartori proposed a modular wardrobe that was almost sizeless and definitely genderless, allowing wearers to reconfigure things however they like. It was impactful, suggesting a future both pragmatic and elegant.

At Tod’s, creative director Walter Chiapponi was on a soft trail, too. By looking at the brilliant personal style of Peter Beard and mixing the idea of the urban safari with that of the exotic safari, Chiapponi offered his own take on staples from the windbreaker to the trench and the biker jacket to the tailored Bermuda shorts. There is an edge to his work that feels modern, but Chiapponi knows how to balance things to not make Tod’s overly fashion-y. His edgy classics feel fresh and desirable, something truly Italian. 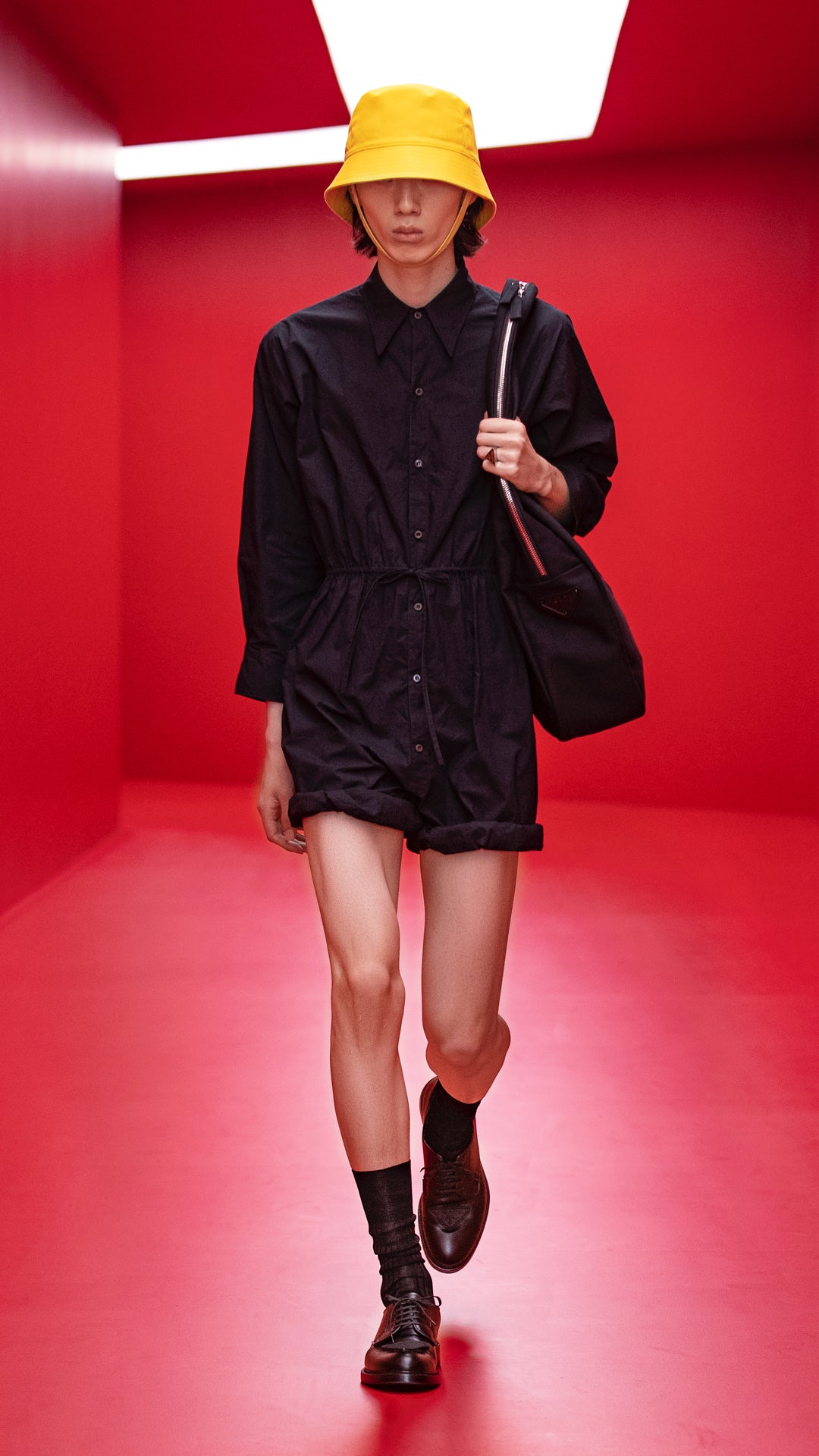 Not everybody was in grown-up, evolved-classics mode, however. Nomadism, escapism and infantilism are all important aspects of this rather multifaceted moment in men’s fashion. The solid idea of the man as a rock has long been shattered, and now the fragments fluctuate in many different directions. There is the sexless glorification of youth that was nowhere as apparent as at Prada. Miuccia Prada and Raf Simons devised a rolled-up-shorts-and-bucket-hat-clad kid in oversized tailored blazers that stomped from claustrophobic red tunnel to beach. As a metaphor of liberation it worked, visually, but the collection, despite all the legs on show, did not look particularly sensual.

The midriff was a focus at Fendi, with cropped suit jackets that recalled artist Phillip Garner’s “Half Suit” project, and again a lot of shorts, matched with fluid shirts and knits and multi-pocket parkas, all of it in the painterly and poetic pastels of a Roman sunset. Filmed with drones on the rooftop and under the arches of the Colosseo Quadrato in Roma, where the Fendi headquarters are housed, both the video and the collection felt like an unexpected celebration of Rome. It worked, but the outing lacked the pointy witticism Silvia Venturini is so excellent at and came across as slightly weak.

There were more legs on display at MSGM, where Massimo Giorgetti swung between the crafty and the technical, keeping the vibe feisty and slightly pagan. The goings got even more spirited at Diesel with the debut of Glenn Martens as creative director. Presented through a trippy, dreamlike video, Marten’s vision for the brand felt consistent, focused on an inventive take on denim and an idea of a magmatic and metropolitan lifestyle, with the right amount of kitsch to spice things up. All of a sudden, it was again the Wilbert Das heyday, with the wonderfully warped Glenn Martens twist. Another house that is taking assured strides in a new direction — away from stuffy classicism, towards lively freedom of style — is Etro, where Kean Etro explored the theme of nomadism with a real-life show held on the dead train tracks of Milan’s old scalo merci. The freight yard tracks were a metaphor for a journey of possibilities leading in many directions: one that Etro condensed in a mashup of ethnic and athletic references, held together in a kind of macho glam look that Italian rock band Måneskin would have loved. The latter was a wise move. Etro has dressed the Eurovision winners to great acclaim, and of course is cashing in on the image, at once ambiguous and assertive.

What was ultimately interesting to see in Milan was how much the industry’s focus is moving towards those wearing its garments, and how they can mould pieces to their own wishes and needs. Perhaps this is no surprise given the rise of the me-generation. This is why a project like Sunnei Canvas, this season presented on avatars, was so on point, suggesting an interaction between user and product that is both playful and progressive, a way to escape the fashion trap of heavy marketing and l’art pour l’art.

Zegna and Fear of God: What the Merger of Suiting and Streetwear Says About the Men’s Market