The Milan Fashion Week that closed on Monday, another digital showcase composed mainly of filmed shows — the fashion film having proved too abstract and too focused on narrative to let the clothes come through as more than mere costumes — was a polarised affair. The action swung between extremes: sparkle and beige; all tomorrow’s parties and the reassurance of quietness; crazy styles and hyper-classicism. Such tension between opposites is not difficult to understand: one year into the pandemic, we have all experience a rollercoaster of emotions. Fashion is just turning all of this into a wardrobe proposition (not a lazy tracksuit or sleepy pyjama in sight, thank goodness).

And so, we oscillated between Fendi’s ode to luxurious neutrals — very Max Mara, although rendered in fabulous minks — and Prada’s glitzy psychedelia; between Max Mara’s foray into sophisticated British country dressing with an Italian bourgeois tingle and Marni’s escape into bonkers romanticism.

There was a widespread longing for freedom — for the outdoors, for carnal sensuality à la No.21, for early 2000s trash à la Blumarine, even for fringed 1968-inflected libertarianism à la Etro — and a thirst for after-dark dressing, so much so that the distinctions between day and night are being completely erased, with sequins and sparkle migrating into daywear, even at Giorgio Armani. If the king of understatement dares to shine no matter what, one has to sit down and take notice: in a warlike climate of ongoing curfews and closed nightclubs, we might as well party whenever we can, even for a quick rush to the supermarket. It all gets back to the vital, regenerative power of fashion: dressing up is a freeing act, an affirmation of one’s presence in the moment.

It did not get any crazier than at Prada, where Miuccia Prada and Raf Simons, as co-creative directors, found a more convincing balance of their respective design personalities and celebrated the urgency of fashion with a capital F in a mutant, psychedelic burst of all-over prints, clumsy wedges and boarding school tailoring. Prada and Simons are always a little cold, coming from the head rather than the guts; highly wrought-out rather than spontaneous. But it was a burst nonetheless: frivolous, brazen, unruly and devoid of any immediate meaning, as befits fashion at its best.

Who needs a shiny gold coat, a faux fur stole lined with sequins, crazily printed leggings that make Emilio Pucci, the originator of decorated legs, look understated in comparison? And yet, in a perfectly concocted video show, these items looked urgently desirable: objects that define the moment. Prada and Simons used the word “transmutation” when discussing the collection, a brainy way to describe the growing fluidity of the masculine and the feminine which defines our times. It worked because Mrs Prada’s codes are so strong and were all there. Simons added a certain synthetic aloofness, a discomforting weirdness, and it looked fine, minus the teenage disco dream. 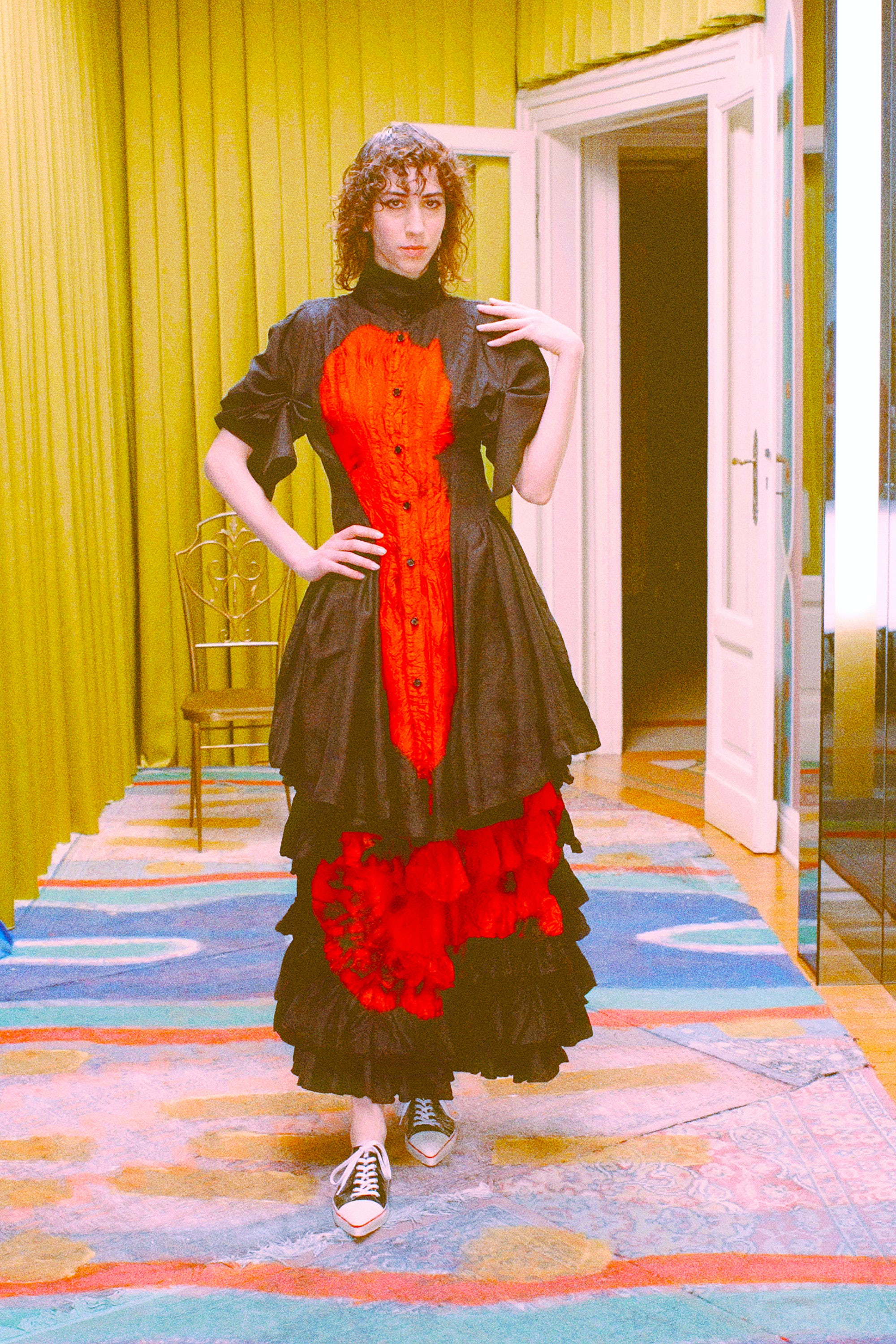 Elsewhere, the celebratory mood took a romantic turn: romantic as in ruffles, ruffles and more ruffles. There were neat ruffles edging otherwise severe coats at Giorgio Armani, while ruffles proliferated, from bustle trench coats to shirts to sweatshirts turned into opera coats, at Marni, where Francesco Risso proved once again the king of his very own fashion realm, filled with wonderful chaos and beautiful freaks. Broadcasted in three distinct moments via Zoom webinars, the collection was a magmatic exploration of humongous proportions, gender fluidity and the possibilities of black as the sum of all colours. As ever for Risso, the highly stimulating thought process, and the inventive fashion-making translated into an output that was charming, but hard to decipher. Risso has a bright spark but needs the eye of an editor to polish it off, as all highly creative authors do. That would make his Marni truly shine and get the fashion weight it deserves.

Loris Messina and Simone Rizzo, with their Sunnei design team — the two always refer to their work as team effort — are certainly alumni of the original, pre-Risso Marni spirit, which they have updated with a digitally-savvy spin. Their merging of bright kindergarten simplicity and boldness works because there is method to the madness, and serious a communications acumen. Not only was the collection the duo’s most polished, but it was presented with a video show within a show within a show within a smartphone that was the simplest and cleverest idea of the season.

Another purveyor of over the top, anti-depression exuberance was newcomer Daniel Del Core, whose first show — the only one with a real audience of 40 attendees in the whole week — was a highly produced, spectacular affair of vertical farming and mutant glamour. Del Core, whose CV includes a long stint at Gucci in the celebrity department, is the herald of hyper, unabashed, highly decorated femininity. The collection was a start, a first attempt at honing a personal vision. And overall, it was filled with wild ideas and bombastic creations, but here and there it lacked focus. Elsewhere what was missing was the fearlessness of authentic excess. And yet it was a good start: finding one’s voice takes time, and an addition of this kind to the Milan calendar feels electrifying. 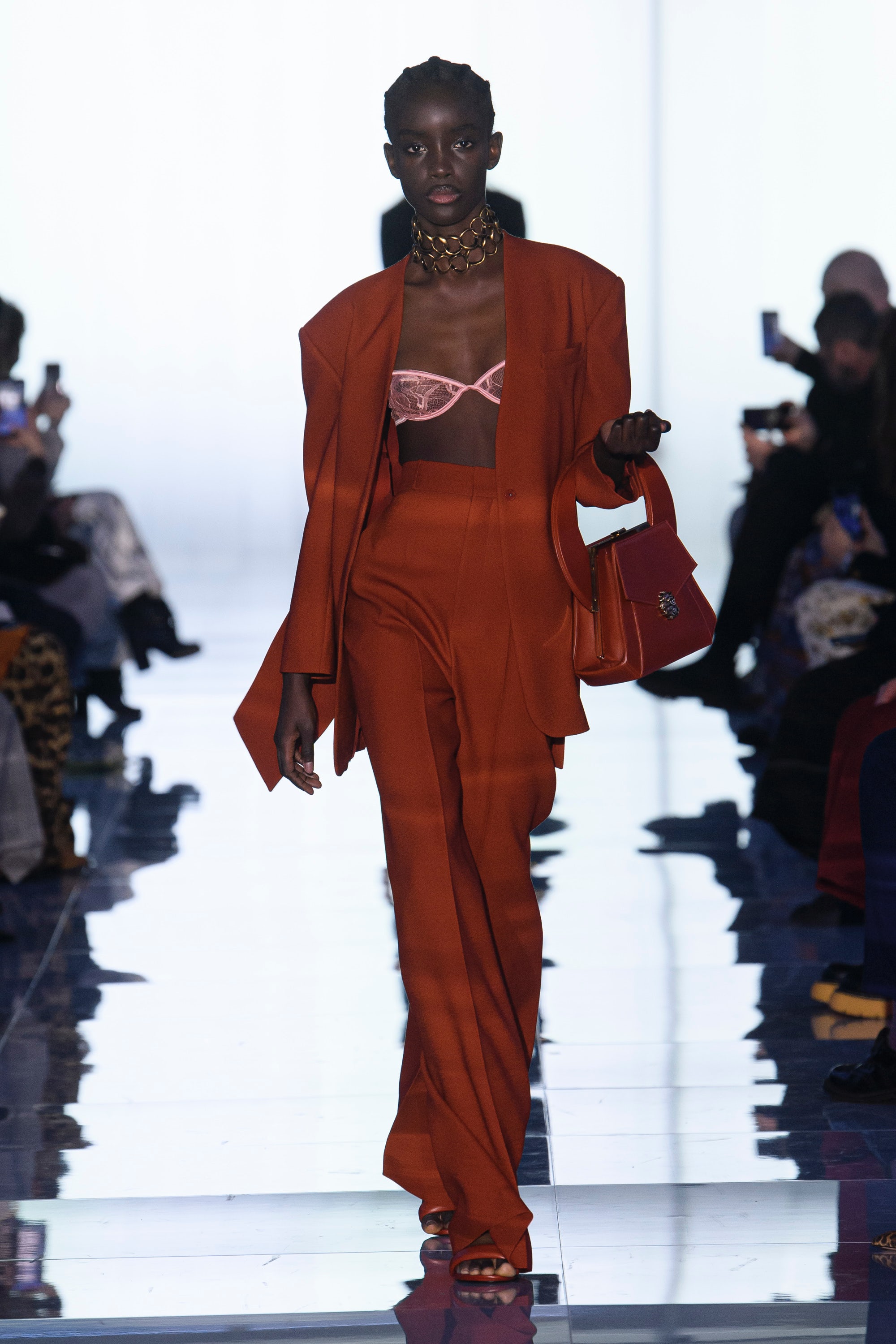 The going took an incongruous, futurist turn at Ferragamo in a feat of glaring colours and galactic tailoring that was hard to contextualise in the recent history of the brand. And yet, Salvatore himself was a fearless innovator. If this is the beginning of a new phase, with Paul Andrew pushing the house away from its conservatism, it could be interesting to watch. At Pucci, where a new design team is subtly updating the label’s image, looking more closely at the work of the founder, colour was both bright and desaturated, translating into a concise and convincing offer of winter clothing with a sunny summer spirit. Colour, of course, is a given at MSGM. This season it came with a club vibe and an underground spin that felt right.

Otherwise, it was quiet, reassuring classicism, in neutral shades and flowing shapes in Milan this week. So classic, in fact, as to be almost anti-fashion. In his first official ready-to-wear outing at Fendi, after his couture faux pas, Kim Jones went beige, depicting a vision of powerful femininity that owed more to the five Fendi sisters than to dedicated beige wearer Kim Kardashian. It was a smart way to reassess the heritage by streamlining it. The Fendi quirk was nowhere to be seen apart from the accessories, but the new simplicity was a precise statement.

A new look at classic items in terms of proportions, colours and layering made for a fresh outing at Alberta Ferretti, while at Tod’s, Walter Chiapponi delivered a considered merging of couture gestures and pragmatism thar marked a sophisticated step forward for the classic Italian brand.

Daniele Calcaterra is a quiet fashion force to be reckoned with: a soulful classicist, an Italian purist in the vein of Armani or Romeo Gigli. Season after season, he keeps refining his language, oblivious to the passing of trends and fads. The merging of dense masculine textures and gold glimmer felt particularly timely this season: a balance of calm and exuberance which might be the right way forward in these dark fashion times.

At Valentino, finally, Pierpaolo Piccioli, summed up the polarised spirit of season with an unremitting fashion statement that felt coherent, determined and to the point. On one side, there was the classicism of working solely in black and white. On the other, crazily short and feisty silhouettes, and nets covering the bodies of both men and women. Keeping it all together was a spiky brand of romanticism. Or, to put it in Piccioli’s own words: “Romantic is the strength to be yourself.”