An ugly beauty dominated Milan Fashion Week. Was it a sign of aesthetic democracy or a cheap trick designed to conjure the illusion of newness?

MILAN, Italy — Is the pursuit of beauty still the main scope of fashion? Judging from Milan Fashion Week, which closed yesterday, it is not. In the place of impossible perfection, unattainable grace, intangible glamour and so on, the casting — and, at times, the fashion itself, suggested that today’s beauty includes a little ugliness.

When Giambattista Valli, a designer unabashedly enamoured with couture-worthy expressions of sophistication, sends an army of peculiar characters down the catwalk at Giamba (his mainline's spirited sister), all awkward poses and strong features protruding, their faces scribbled with tiny self-made doodles and their lean bodies encased in fetish harnesses worn over fairy dresses, you know it’s time to start to reset your fashion clock. In other shows, the models were so intensely singular looking, you almost felt disturbed, which, I suppose, is natural when confronted by the shock of the (relatively) new.

Fashion's on going love affair with stray cats — impossibly cool and so-ugly-they-are-beautiful weirdos — has been going on for quite some time. Hedi Slimane, for instance, has being playing the trick since the start of his tenure at Saint Laurent. But this is not the nth case of Milan appropriating and diffusing what's happening elsewhere. On the contrary, it is a major shift worthy of consideration. Fashion is widening the perimeters of the acceptable, which is always good and if aesthetic democracy infiltrates a realm so secluded and exclusive, well, that's an earthquake. Yet, if the earthquake serves the sole purpose of selling another dress that's basically a replica of a vintage style, it's another story altogether.

Of late, fashion shows in Milan — as across the fashion system — have become more and more boring. Due to the speed and saturation level of the fashion market, you see things you've already seen a zillion times, tweaked just so. Was Prada's macaroon-coated ladylike really a blast? May I suggest it was already Blumarine's recipe from day one. Of course, Mrs Prada holds a perverse touch like no other. Yet this season it was clearly not enough. And what about Moschino's graffiti couture? Didn't Stephen Sprouse say the definitive word on the matter a long time ago? DSquared2's Western adventure, albeit captivating — didn't it look like Galliano had a love affair with Ralph Lauren? The list goes on.

In the absence of original ideas, one way to shake things up a bit is to turn a show into a gallery of characters. Linking a lack of traditional beauty to the fierceness of a unique personality is, of course, a cliché, but fashion people have never really been subtle thinkers. And what screams ‘character’ more than a certain type of ugliness?

In Milan, ugliness, or at least a certain weirdness, was everywhere exactly for that reason. At shows — like Pucci and DSquared2 — which cast traditional, hyper-sexed models, you felt suddenly teleported into a time which felt kind of old and odd. Fausto Puglisi, on the contrary, managed to balance the achingly beautiful and the intensely ugly, as did Donatella Versace, and they both scored with two fiercely tuned punches of shows. 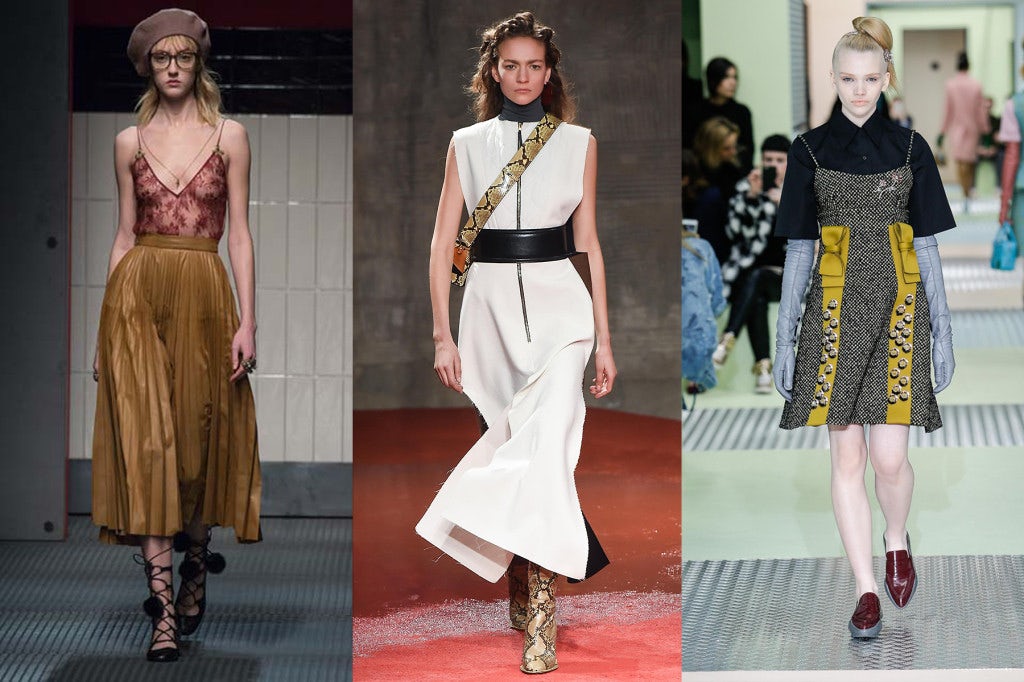 The proclivity for artistic ugliness, apart from being an effective show trick, poses an interesting question about the audiences with whom fashion houses are seeking to communicate. When you look at the catwalk, the brands appear to be targeting a group that is younger and younger and younger. But as luxury prices continue to rise, youngsters who want to replicate catwalk styles have access to so many alternative sources nowadays and can easily adopt (and adapt) a look seen on the runway at a fraction of the price. Which makes you wonder: will mature women, who are the actual consumers of luxury fashion brands, ever be engaged by ugly? It is very unlikely to happen.

Moreover, the very same houses that opt for peculiar beauties at their fashion shows, curiously enough, turn to the most traditional ones when selling beauty products. Which makes you wonder if going ugly is just another attention grabbing tactic, rather than a case of aesthetic democracy.

Which brings us straight to the core of this complicated dilemma. There were a few notable exceptions — Marni, for instance, which was truly progressive and experimental; Prada, because, like it or not, she still keeps pushing the envelope; and No.21, which although a tad heavy, still felt fresh. But by and large, Milan’s fashion, just like fashion in general, has less and less to do with clothes. It is the atmosphere that counts at a show — and, in general, for a fashion house. The clothes get their seductive charge from precisely that and certainly not from the questionable originality of their designs. Blame it again on Hedi Slimane. His ability to sell clothes that are almost exact replicas of vintage finds is unparalleled. You rush to buy his pieces, not because they are the best, but because the person who wears them on the catwalk looks incredibly fascinating and you want to achieve that.

In Milan, nowhere was this shift as apparent as on the Gucci catwalk, where new creative director Alessandro Michele scored with a collection that was strangely beautiful and, despite an anti-nostalgic statement, deeply melancholic. Replacing the codified Gucci vixens with fragile, ambiguous, bespectacled ugly ducklings dressed in a seemingly bonkers mix of thrift store finds and broken romanticism, Michele secured the week's highest point — and an avalanche of press. He represents ‘the new’ because of the spontaneity of his vision, the directness of his approach and his healthy disregard for fashion clichés. Yet his approach, albeit charming, is a wonderful experiment in the possibilities of editing and assembling. In other words: it is a thing of styling, which almost puts design into a corner. One way or another, Michele managed to make the misfit a desirable role model and that is already quite an accomplishment.

“Post-production” — that's how Nicholas Bourriaud, director of the École Nationale Supérieure des Beaux-Artsin Paris, christened the creative approach of our hyper-saturated times. Newness comes from the way you assemble things, not from the things themselves. This applies to Milan's fashion.