Tim Blanks reports on an all-digital couture season that transported him from the bleak London lockdown as designers stretched their creativity showcasing fashion’s highest craft.

Tim Blanks reports on an all-digital couture season that transported him from the bleak London lockdown as designers stretched their creativity showcasing fashion’s highest craft.

Is a year too long to spend indoors staring at a screen? If the virus steals your sense of taste and smell, does it also dim your appreciation of fashion IRL? After three days of virtual haute couture, I’m thinking NO! The exact opposite, in fact. I’m high on extravagance, giddy with gilt. I can’t touch fashion, but I can feel it. This is what it must have like in the ’50s, when the novelty of television locked everyone down at home in front of their small black-and-white screens, and Hollywood fought back with CINERAMA! PANAVISION! TECHNIRAMA! Within the obvious physical limitations — everything that came with virtuality, obviously — haute couture made its usual stand for creativity and craftsmanship, but there was an otherworldliness to this season. I mean, some of Valentino’s models looked so unearthly, with their gilded faces and their supernally elongated frames and their flowing elvish locks, that I wouldn’t have been at all surprised to hear that Pierpaolo Piccioli was casting in Rivendell. Maybe I’ve just been staring at my screen for too long but I was transported.

I needed to be. The forecast is bleak in London, not just weather and Brexit teething pains (more like a root canal) but the virus tightens its grip. “I honestly think what we lived as fashion before will never come back,” Maria Grazia Chiuri said the other day. “I don’t know what is the future, but if I think now? No. I don’t want to be negative, but we are different. After this year, I don’t think I am the same.”

Her couture show for Dior was based on the Tarot, an obsession of Monsieur Dior’s. He was very engaged by prognostications of all kinds. Who wouldn’t want a glimpse of the future right now? “That’s just one vision of the Tarot,” Chiuri countered. “The other point of view is that it helps you know more about yourself, like a mandala. In this moment, when everyone is isolated at home, they’re looking inwards. That was the vision that fascinated me.”

So her new collection was staged as a young woman’s voyage of self-discovery, guided through a labyrinthine castle by characters from the Tarot. Chiuri invited director Matteo Garrone, also her collaborator last season, to make a film for the collection. “But I was obsessed that the clothes would not be film costumes. We had to maintain the idea of a fashion show.”

The characters in the film leaned towards the elaborate Renaissance embellishment of the famous Visconti-Sforza Tarot, decorated by Bonifacio Bembo for the Duke of Milan in the 14th century. The lookbook presented a more typically broad spectrum of Chiuri’s interpretation of Dior, from resplendent to rigorous. But in both film and lookbook, the most interesting character was the principal boy, the main character’s male-twinned alter ego who trolled her through the castle. She finally coupled with him in a bathtub at film’s end (anyone who has seen Garonne’s Tale of Tales or Pinocchio will be familiar with how his movies so effortlessly take a turn for the fairytale perverse) to consummate her journey to absolute self-awareness.

That was the most curious injection of testosterone into the couture calendar. The most beautiful was Valentino’s. “There are pieces of a wardrobe today that work for men and women, the camel coat, the white cape,” said Pierpaolo Piccioli. “There are not two labels, there is just one — couture — and a new generation of people who wear menswear and womenswear with no boundaries.” 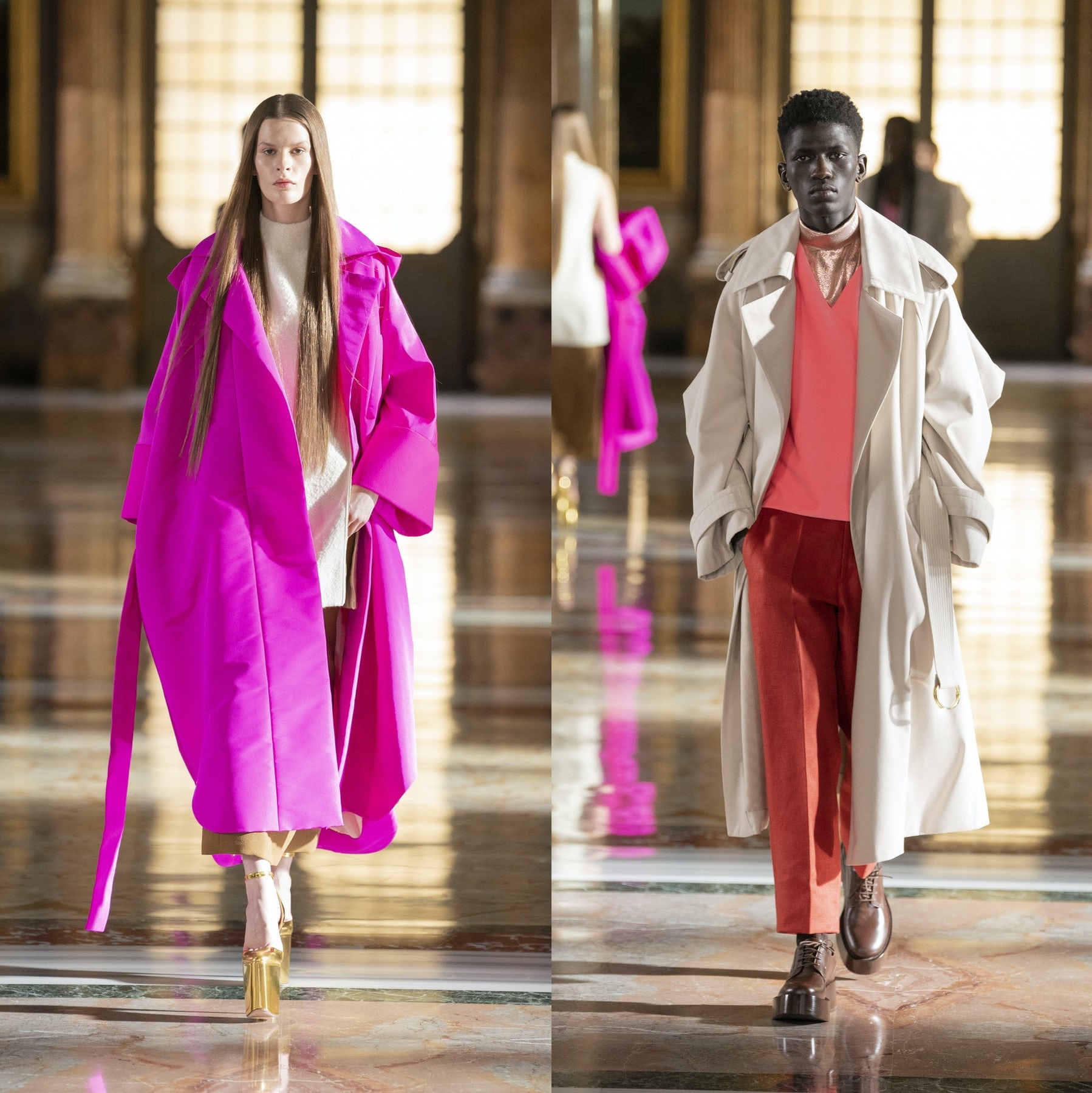 Early on in Valentino’s virtual presentation from the Sale Grande, a huge baroque salon in Rome’s Galleria Colonna, a woman walked by in a fuchsia faille trench coat. Moments later, a man appeared in the same thing, his cashmere cotton coloured a classic camel, magnificently detailed with a cape-like storm flap. The same interplay occurred with capes, the turtlenecks that underlaid a lot of looks and the trousers. I’ve already mentioned the unearthly beauty of the casting. Piccioli compounded it by spraying the collection with sparkle, a gold-sequined jumpsuit and the final copper organdy look iridescent with sequins among the standouts. The show’s credits thanked “Humans of Valentino” which made them sound even more like Men and Women Who Fell to Earth.

On his moodboard, Piccioli had a photo of Leigh Bowery encased in red glitter. The idea of transformation into some more liberated state — “something different but not as codified” — was clearly on his mind. He has always loved the idea of couture as a human ritual. Massive Attack contributed an original soundtrack called “Ritual Spirit” to the show. Robert del Naja from the band has been working for the past three months on “teaching” artificial intelligence the creative process of Valentino Couture. The result of this project will be revealed on Friday. “He knows nothing about fashion,” said Piccioli, “but I asked him to be part of this journey because I wanted to document ‘the making of’ in an untraditional way, mixing AI with humanity.”

While he and del Naja were hatching the Singularity at Valentino, Virginie Viard at Chanel had also enlisted a collaborator who was music industry-adjacent. Viard wanted Anton Corbijn, the photographer and filmmaker who turned U2 and Depeche Mode into moody rock icons, to shoot a family album to commemorate her new collection, inspired by summery nuptials in the South of France, vine-draped columns, petal-strewn bridal path and all. After a year when seeing family (or not) has become a pressing matter for millions of people all over the world, Viard could think of nothing that was more celebratory of getting together than a wedding. Though Corbijn’s album was undoubtedly the souvenir of this couture season, his pensive, shadowy monochromes sidestepped the frothy prettiness of Viard’s clothes: the billow of aquamarine tulle; the little white dress in a daisy lace, wrapped in an overskirt of the same lace; a peasant skirt in pastel tiers. Though she did like a boyish waistcoat — tweed, naturally — up top.

And let’s hear it for the boys once more in Kim Jones’s debut couture collection for Fendi. (So it’s official — men in couture is a trend.) One of them was James Turlington whose aunt Christy walked in the show too. The F in Fendi has always stood for family, never more important than now. Kate Moss and her daughter Lila, the Aboah sisters Adwoa and Kewesa and Silvia Venturini Fendi’s daughters Delfina and Leonetta also modelled, alongside Demi Moore, Naomi Campbell and Bella Hadid. The stellar cast underscored the confidence with which Jones has embarked on his first foray into womenswear. The clothes compounded it. The emphasis was on sheer glamour (Moss does Harlow!), in the languid ’30s-styled eveningwear crafted by artisans — surely among the best in the world — in Fendi’s studio in Rome. The most stunning effects reproduced the marble of Rome’s Galleria Borghese.

But that same marbling covered the books of the Hogarth Press, published by Virginia and Leonard Woolf, and this was where Jones’ own obsessions managed to personalise his Fendi debut. The Woolfs were part of the Bloomsbury Group, a family they made for themselves, albeit a dysfunctional one. Jones has a museum-quality collection of Bloomsbury’s art and ephemera, including multiple copies of Woolf’s “Orlando,” whose hero turns heroine. It’s the ur-text of our own ungendered era. In the show, Adwoa Aboah wore a floral-sprigged gown with one arm sleeved in a frock coat. That was a sweet gift to Virginia, whose 129th birthday would have been on Monday.

The complex set of F-shaped vitrines and the speed of the presentation meant the clothes passed by as fleeting virtual visions. Jones said Wednesday’s launch was intended as a prelude to an upcoming 30-minute film which will allow for a much deeper dive into the wondrous workmanship and accessories, like the Empress Theodora earrings designed by Delfina. It will also aid appreciation of the extraordinary soundtrack. In keeping with the season’s theme of dazzling collaborators, Jones asked Max Richter to adapt “Woolf Works,” which he originally composed for The Royal Ballet. Over the music are laid the voices of women reading from “Orlando.” 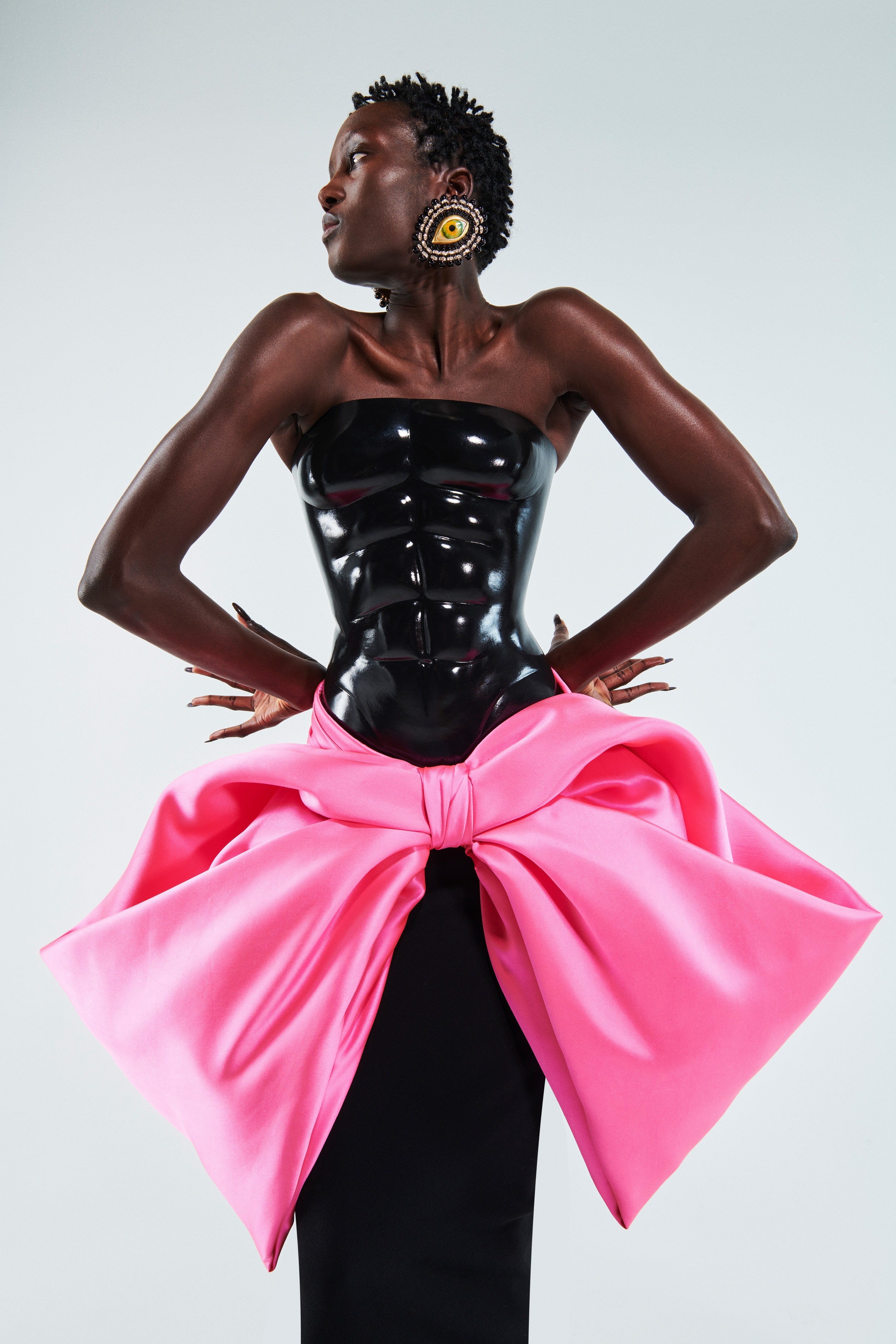 There’s undoubtedly something melancholy in so much artistry being expended in empty, audience-less spaces. A screen is no recompense for the fragrance, the rustle, the sound of heel on flagstone. But the melancholy was matched by defiance. “I didn’t want this to be about my experience making a collection in the time of Covid,” said Daniel Roseberry, now two years into his creative directorship of Schiaparelli. “I felt different coming into this season. Knowing it was going to be purely digital was inspiring. It needed to be visually engaging.”

Which was a typically (for Roseberry) mild-mannered way of saying he was about to engage with gorgeous exaggeration. No train too long, no collar too high, no bow too big… not difficult when your benchmarks are Grace Jones, Missy Elliot, Gwen Stefani and Sigourney Weaver circa Aliens, who inspired the remarkable Madonna and Child breastplate.

Roseberry was a week off the Biden Inauguration, where he dressed Lady Gaga in patriotic red and blue, with a huge gold dove as ornament. He was working for Thom Browne when Michelle Obama wore Browne at her husband’s second inauguration. “So I knew what power that moment could have.” And now he was in those shoes? “I’m shooketh to the core, still. We had 25,000 views on our last video. We’ve had 600,000 on this one in the last 24 hours!”

He’s clearly in the vanguard of a new take on couture, like Kim Jones, but Roseberry cast a gimlet eye on the big design guns. “Their budget for one gown is my budget for an entire collection. I will never win that game so I have to figure out a way to stay in the front lines by being resourceful.” His potentially winning formula? “Be disobedient but respectful. I want this to be more of a cultural conversation.” Feel free to start talking about the rippling six-pack bustier that topped a gigantic Schiap-pink satin bow and a slinky black column. Or the equally defined warrior breastplate with the matching tote. Or the sinuous tiger-print goddess gown.

Roseberry is 34. Giorgio Armani is 86. That half-century span embraces the history of modern fashion. But everyone, whoever, wherever, is working under the same shadow right now. Armani found emotional succour in the Covid-emptied streets of his hometown Milan. The peace and quiet seeped into his Privé collection. Melancholy too, in the misty shimmer of grey pantsuits. There were none of those little quirks he likes to toy with when he tests his sublimated appetite for eccentricity. As extreme as he got was a gown with a wave of red duchesse cresting across the bodice. It was a beauty. There was also a solid selection of the blue tones that have become Armani’s most reliable signature. His presentation concluded with one of his favourite models rushing down a corridor in a huge cloud of blue tulle, in search of the maestro. He emerged from the inky shadows for a quietly theatrical bow.

It seemed appropriate. All the world’s a stage, and all the men and women merely players; they have their exits — far too many of them at the moment — and their entrances. And, in the silence of my book-lined cell, haute couture offered me a small but glorious window on that world, for which I am profoundly grateful.