In Paris, Sex Sells, While Innovation is Scarce

PARIS, France — A gruelling ‘fashion month’ closed yesterday rather dimly. There was no glittering fanfare, nor theatrical adieu: editors, buyers and other industry insiders seemed to leave Paris as fast as they could after the last show.

The buyers looked quite happy, as the focus of most of this season’s womenswear collections was wearable, saleable product. This was the case in the ville lumière as well as in New York and Milan. As for innovation, things looked less rosy. Save for a few exceptions, designers at this moment of economic and political uncertainty do not appear to be interested in shaking up the status quo, nor in evolving the aesthetic parameters they have set for their labels.

Rick Owens certainly did, however, brutally sacrificing his best-selling liquid layers on the altar of pale pastels and airy firmness, differentiating himself as one of the brave and happy few in a flock of fearful sheep. But Owens is a free thinker, possessed of a radical mind. Why would other designers want, or even need, to forsake a winning formula? Continuity sells, because, at the end of the day, many people love to buy the same things, rendered slightly differently each season with small tweaks. The majority of customers do not appreciate conceptual, uneasy, challenging fashion. This is not the 90s, thankfully.

Beware. Fashion today is no longer a creativity-driven industry. At least, not its high-end or mainstream expressions. Having fallen under the spell of finance and big profits — commerce is vital, of course, and a fashion house is not a charity — fashion has become the victim of soulless corporate marketing plans, which almost completely erase dreams. Yet dreams make commercial transactions happier. You can sense it at most shows: ‘it’ items are sold, metaphorically speaking, on the catwalk, brought to life by the staging of the shows and every possible styling trick, ready to be propelled to global exposure and planted in the collective imagination of consumers through a stream of viral social media snaps.

Reducing fashion design to astute product placement — the Instagram effect — however, might lead to consistent cash flow in the short term, but create a boomerang effect in the long term. Repetition is reassuring, but only a thin line separates repetition from boredom or saturation. Isn't fashion’s real raison d'être the continual quest for the new? It should be.

Instead, at the moment, even fashion's Dadaist-in-residence, Miuccia Prada, keeps repeating the same bourgeois-gone-bad tropes at Miu Miu, while Maria Grazia Chiuri and Pierpaolo Piccioli, the creative duo who have turned the once staid house of Valentino into a progressive, global fashion phenomenon, give you the impression of creating one single collection season in, season out, limiting creation to detail and print. Valentino's show was a lyrical, subtle, beautifully made hymn to Italian memories, but sometimes one craves surprise. 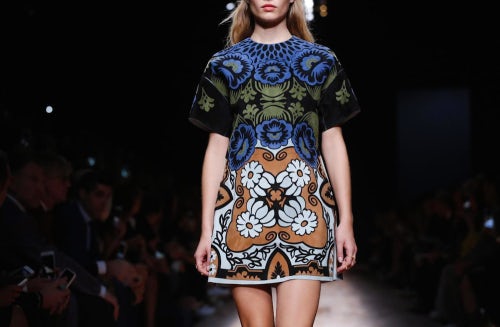 Both Miu Miu and Valentino are Italian brands showing in Paris, fashion's undisputed global capital, which attracts protagonists from the four corners of the world. But never before have fashion weeks been pitted one against the other, as they were this season, with the most common clichés: London's experimentalism versus Milano's commerciality; the safeness of New York versus the innovation of Paris. It might be true, but maybe it’s not anymore, because this season even Paris was not exactly shiny.

At one point, the battle of the fashion contingents went bogus: after Alexander Fury's merciless attack on Italian fashion in The Independent, Stefano Gabbana responded by publishing pictures from various Milan collections on his own personal Instagram, under the banner “Viva l'Italia.” As an Italian myself, the gesture made me proud for a second. But the feeling did not last. Promoting some kind of North-versus-South, Gone With the Wind-style binary will not bear fruit. In a globalised world, fashion should leverage local peculiarities to build a richer, deeper and broader mosaic. But in order to do so, fashion needs one simple thing: ideas. They do not have to be crazy or outlandish; they need to push progress. There's hunger for innovation everywhere, but even more so in Paris, where we once all gathered to see the future of fashion.

Instead, what do we have now? Little, very little. Grand shows that function mostly as a cover up for the lack of ideas. This season, for instance, even the soundtracks were particularly catchy and distracting. One kept wondering, how would most of the collections have appeared in total silence. Dull, I tell you. Unless it was a Japanese designer, of course! All of a sudden, Paris seemed to be propelled three decades backwards. It was the early-80s all over again, when Rei Kawakubo and Yohji Yamamoto arrived in town and created a stir by turning the tables and rethinking notions of beauty and dress, while their European peers were stuck manipulating traditional forms.

This season, too, innovation came from the far East, in every possible form, from Undercover's dark fairy tale and Comme des Garçons' red-drenched Grand Guignol to Junya Watanabe's pop rendering of Orphic cubism and Sacai's inventive clash of militarism and romanticism. Not to mention Yohji Yamamoto, who made an unexpected and breathtaking comeback with a bomb of a collection that was about — surprise! — sensuality and exposed skin. If even a master like Yamamoto pays homage to the reality that sex sells, one has to take notice. 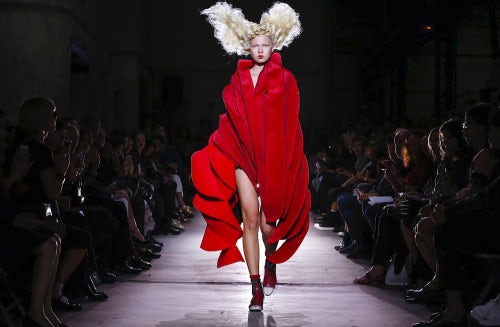 There is a major shift happening in the tectonics of fashion. Milan was once the fashionable capital of sex, or rather sexy. Now, as Vanessa Friedman lamented in The New York Times, “the bunga bunga has left the catwalk.” When the ‘Bunga Bunga’ was in the house, of course, the same critics who now miss it kept saying Milan was vulgar, but that's just because contrariety is a rule in fashion. Well, the Bunga Bunga is alive and kicking. It just went up north and settled in naughty Paris, materialising as Givenchy's rococo fetish, Saint Laurent's glam groupie galore, Ungaro's vaudeville and Sonia Rykiel's Left Bank naughtiness. It reached a peak at Miu Miu, but was nowhere as captivatingly captured as at Louis Vuitton, where it was reduced to just a hint, a vibration of bad girl swagger that gave an electric tingle to a collection that otherwise felt like a journey into modernist forms and intricate craftsmanship. 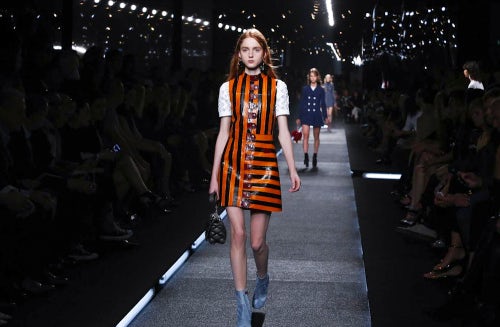 Nicolas Ghesquière, whose previous work for the house of Balenciaga keeps influencing generations of young designers, epitomises what it means to be an inventive designer today. Since his Balenciaga heyday, he has done away with the unforgiving strictness that made his aesthetic so progressive but oh-so-cold, embracing warmth and sensuality, but, most of all, realism. He keeps experimenting, building what is essentially a pragmatic wardrobe suited to contemporary needs. Everything he sends down the catwalk looks perfectly saleable and wearable, which is the exact opposite of the visual feasts Marc Jacobs put together for the same label not so long ago.

Which leads us, unexpectedly, to an optimistic conclusion. Vuitton had both sex and innovation — and it was a relief. Fashion still has plenty of room for improvement, after all. Corporate marketing and safeness aside, innovation is possible. Maybe it won't take radically new forms. Most likely, it will be about tweaks, surface treatments, even a certain brutal primitivism, as we saw at Loewe. Progress, right here, right now, does not come with a punk rupture. It requires the focus and determination only soft revolutionaries truly master.