BoF’s editor at large remembers one of Jones’ earliest collections, ‘a celebration of youth’ where the future took a sharp edge. 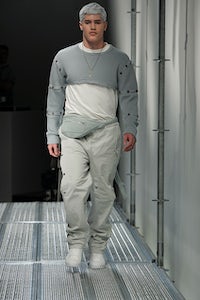 BoF’s editor at large remembers one of Jones’ earliest collections, ‘a celebration of youth’ where the future took a sharp edge.

Whoever he’s designing for, one of the joys of a Kim Jones collection has always been the mesh of references he weaves to make a mood. His triumphs at Vuitton and Dior, coloured by collabs with marquee-name artists and brands, have been fulsomely documented (check back for Dior Men’s Autumn/Winter 2021 on December 8), but my own personal favourite will always be the Autumn/Winter 2005 collection he showed under his own name, before the years of pomp, at La Maison Rouge in Paris. Everything we have come to expect and love from Mr Jones was already present and correct: the curatorial appetite, the ability to work well with others, the twisted little hints of autobiog, plus the remake/remodelling of menswear that fused sporty athleticism and sartorial elegance. The latter was responsible for Kim’s subtle transformation into one of the most influential figures in 21st century fashion.

I say “subtle” because he was never one to blow his own bugle, however quietly ambitious he may have been. But those who knew could just tell when they looked at his work. Like Professor Louise Wilson, the starmaker of British fashion, who immediately accepted Jones on the MA menswear course at Central Saint Martins even though he was more experienced in designing record sleeves than clothes. “He had those eclectic, magpie research skills that are unusual”, she said. She could easily have added “obsessive” to the list, because Kim’s insatiable eye for the immaculately realised detail has been one key to his success. And Autumn/Winter 2005 offered some early insight into how he could build a world from his obsessions.

Jones has always been fascinated by hermetic environments where male appearance and behaviour were strictly codified as emblems of belonging. The tribes he grew up with in Africa were an early example. The club cults of London in the 1980s were another. And the subcultures that sprang up around Stüssy and Supreme made a huge impression on him. But the closed society Jones was drawn to in 2005 was prisons. As fiercely unpromising as that sounds on the surface, he was inspired by the graphic codes of Russian criminal tattoos. He was also looking at “Conversations with the Dead,” Danny Lyons’s classic photographic record of the American prison system. For his show, Jones asked set designer Simon Costin to construct a metal gangway, like something out of the hardcore tv series “Oz.” Makeup artist Peter Philips painted realistic tattoos on the models and hair maestro Guido gave them choppy convict cuts in a startling shade of frozen blond.

But the other thread running through the show was the purest antidote to gulag gloom. Jones loves the work of Antonio Lopez, whose illustrations helped define fashion in the ’70s and ’80s. He wanted the spirit of Antonio’s playful physicality in his clothes. On the soundtrack, MFSB’s “Love is the Message” reflected Jones’s passion for classic dance music (it was a big track at legendary New York club Paradise Garage in the early ’80s). His co-stylists were Nicola Formichetti and André Walker, another New York legend. Talk about curating a mood! It reminded me of those epochal London moments – the ’80s again – when you’d get your gang together to stage something that was as much celebration as show, Body Map being the best example.

I remember the Autumn/Winter 2005 season being dominated by slimline tailoring, so the athleticism of Kim’s collection stood out: track suit, union suit, knit leggings, drawstring waists, ribbed cuffs, full trousers with a kickboxer’s flair. With his knack for making athleticwear look interesting, he’d already built a cult following through his moonlighting gigs at other labels like football brand Umbro and Topman, but the future took on a sharper edge with his own collection. Like the shape of a broad shoulder on a double-breasted blouson, or the navy blazer over trackpants, or the sleek, sartorial outerwear. And that’s how you change the way men dress.

In keeping with the prison theme, there was a uniform story running through the collection. But Jones said he wanted the show to be “a celebration of youth”. When I read that now, it triggers a connection with Raf Simons’ presentation for Spring/Summer 2000, where Peter Philips was also on makeup, Guido worked equally striking tonsorial transformations and David Sims took pictures that were eventually collected in the cult bible “Isolated Heroes.” The Sims in Kim’s story was Alasdair McLellan. The book they made together in 2005 is also a cult favourite.

I’ll leave you with one more detail, to compound everything I’ve said about Jones’s ability to weave a world out of his own love of esoterica. Some of the models in his show wore headgear he called “squid hats”. To me, they looked like the caps that the sans culottes, the foot soldiers of the French Revolution, wore in the late 18th century. Then, they were called Phrygian or liberty caps. What does any prisoner long for? Freedom! Some history, some philosophy, a little arcane style... was this Kim’s sly way of literally capping off his convict collection? I really wouldn’t put it past him.

The images in this review are courtesy of INDIGITAL.TV and Fashionology.com

VOICES brings together the movers, shakers and trailblazers of the global fashion industry and unites them with the big thinkers, entrepreneurs and inspiring people who are shaping the wider world, hosted by BoF founder and editor-in-chief, Imran Amed, and led by BoF's expert editors and correspondents. Register now to reserve your spot.

1. THE WIDER WORLD: Making sense of 2020 and charting a way forward 2. INSIDE THE FASHION SYSTEM: Addressing the industry’s most important challenges and opportunities 3. TECHNOLOGY & INNOVATION: Exploring how new technologies will change consumer behaviour 4. REINVENTING RETAIL: Understanding how forces accelerated by the pandemic are completely reshaping the retail landscape 5. LIVE YOUR BEST LIFE: Finding the balance, insight and inspiration to be the most authentic, healthy version of yourself

This year, VOICES will be delivered via a live broadcast adapted to the unique circumstances of the Covid-19 era — and BoF Professional and BoF Professional Student members anywhere in the world can take part in this live global conversation as the industry looks ahead to 2021. If you are not a member, sign up today with our 30 day trial, including access to VOICES 2020.