BoF’s editor at large travels to Cirque d’Hiver, a 150-year old circus in the funky 11th arrondissement of Paris, where Mugler used fashion and film’s past to mould a vision of a fierce sci-fi future. 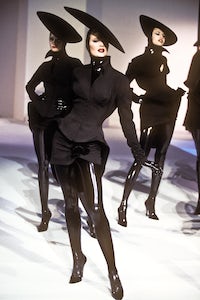 BoF’s editor at large travels to Cirque d’Hiver, a 150-year old circus in the funky 11th arrondissement of Paris, where Mugler used fashion and film’s past to mould a vision of a fierce sci-fi future.

Lady Miss Keir’s re-recording with DJ Honey Dijon of Deee-Lite’s “What is Love?” for Dior Men’s virtual show earlier this week – “What is Diorrrrrrrr?”, she squealed delightedly —  triggered at least one person’s memory of the last time she personalized the same song for a designer. Thirty years ago, when she and Deee-Lite fell into the orbit of pop culture omnivore Thierry Mugler,  Kier remixed  the track with DJ Sister Dimension for his show.  On that occasion, she purred, “What is Muglerrrrrr?”  This week, the man himself took to Instagram to remind us all of that fact.

And that in turn reminded me it was past time to write about one particular Mugler show that is perfect fodder for these locked-down months when many people have been reporting remarkably vivid dreams (so I’ve read). I know my dreams have been ridiculously entertaining, and the haute couture show that Mugler presented in March 1995 was nothing if not that.  It was the 20th anniversary of his label, his fragrance Angel was the best-selling scent in the world…it was a perfect excuse to throw a spectacular party.

His venue was the Cirque d’Hiver, a 150-year old circus in the funky 11th arrondisement of Paris,  transformed with a monumental, multi-leveled set and a single grand staircase that swept down to the catwalk. A huge star, emblem of Angel, was projected above the set. Nothing by halves, which was perfect for Mugler, who was equal parts rigorous designer and Flo Ziegfeld showman.  The velvet and gilt of the circus backdrop was perfect too.  On this one night in Paris, Mugler got to play ringmaster to his own extraordinary cast of characters.  In his post-fashion career, he would go on to costume “Zumanity” for Cirque du Soleil in Las Vegas, but there was another circus like Mugler’s own show.

It wasn’t really even a question of having the financial resources to stage such a spectacle. That was never in doubt. Almost everyone has a price.  What I found more fascinating was the scope of Mugler’s imagination.  It was like he’d corralled every woman he’d ever fantasized about: archetypal Hitchcock blonde Tippi Hedren, original Catwoman Julie Newmar, legendary mannequins Veruschka and Carmen dell’Orefice, runaway heiress Patty Hearst.   Then he stirred in a heady mix of catwalk beauties past and present:  Jerry Hall, Marie Helvin, Simonetta Gianfelici and the aristocratic Betty Lago sharing space with Linda, Naomi, Kate and Nadja Auermann.  With her legs forever, Nadja could have been specifically engineered for her gold robot outfit.  It was constructed in collaboration with Jean-Pierre Delcros, whose usual speciality was designing planes.

Mugler once said his dream was directing movies, not designing clothes. He modelled his creations on screen goddesses from the 30s and 40s, which made sense given that one of his biggest influences was Travis Banton, Dietrich’s costumer in classics such as “Shanghai Express and “The Devil is a Woman”.   Banton was also a favourite of Lee McQueen’s. He shared the same sharp-shouldered, wasp-waisted silhouette with Mugler.  The opening sequence of this show nailed it…a handful of women in breathtakingly sculpted black suits, huge Philip Treacy UFOs on their heads.  They looked like an insectoid master race.  But Mugler also used fashion and film’s past to mould a vision of a fierce sci-fi future - or at least the kind that movies once envisaged.  Nadja in her bodysuit wasn’t the only look in the show that echoed Fritz  Lang’s “Metropolis”.  There was also a cyborg metal and Plexiglas catsuit which took six months to make in Mugler’s atelier in collaboration with the artist Jean-Jacques Urcun.  Now that’s haute couture.

The show ran for an hour.  It felt like there were hundreds of looks, and the pace was glacial.  That staircase took some time to descend.  But Mugler’s ballet background echoed in the careful, complex choreography of his models.  It yielded dozens of delicious vignettes: Veruschka intimidating as the rigorous collar-and-tied maitresse of a Weimar dyke bar;  Patty Hearst stripping off her black velvet sheath and beehive wig to reveal the pulsing heart of a Vegas showgirl; Julie Newmar ambulating oh so carefully down the catwalk in black rubber lace;  worlds almost colliding as Kate Moss circled past Tippi Hedren.  The shabby confines of the backstage allowed for more chance encounters of the absurd kind.  I ended up talking to Tippi about her pet lion back on the ranch in Big Sur. Excuse me, you’re Marnie!

And then, in a typically perverse Mugler twist, loin-clothed go-go boys assumed their podiums amongst the goddesses in their evening gowns, and James Brown took to the stage.  He launched into his signature “It’s a Man’s Man’s Man’s World” ,  took a long look around, added an impromptu, “But not tonight, it’s a ladies’ world”, and surrendered the spotlight to said ladies to prove him right.  (He basically sang two lines.That was a payday!)

Celebration though it may have been, Mugler later said he felt the show was the end of an era for him.  Fashion as the exercise of deeply idiosyncratic creativity that he loved was being overtaken by industry.  His fragrance licensee owned his name.  He retreated from fashion,  went back to calling himself Manfred (the name he was born with), completely remodelled his appearance from dancer to hulk.  Maybe this added up to a repudiation of his past, but he still exercised his Ziegfeldian instincts by working for the theatre, and in recent years, the likes of Beyonce and Cardi B have sought him out to gild their lilies.  Best go back to that night in March 1995 and heed the words of  Violeta Sanchez, the model who unforgettably sported the black evening sheath with the ass cut out of it.  “We all had a mission to be unforgettable,” she remembered.  Case rests. 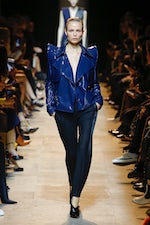 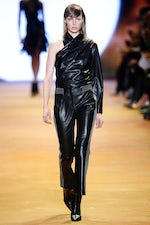 Uncomplicated on the Mugler Savannah