Corporate activity in the luxury sector has stepped up with 19 announcements in the month of July alone, offering a smorgasbord of deal structures and motivations.

LVMH, Kering, Richemont and Swatch have transformed the luxury industry from a collection of family-owned brands with a largely artisanal approach to doing business into a sector dominated by global powerhouse groups with shared services such as manufacturing (Kering) and the ability to negotiate deals for vast tracts of premium retail space (LVMH).

This strategy is clearly paying off: LVMH shares have surged by more than 70 percent since June last year, making the group the biggest European company by market value and allowing boss Bernard Arnault to overtake Amazon founder Jeff Bezos as the richest man in the world. The group has been the luxury sector’s boldest consolidator, notably in jewellery with the $16 billion acquisition of Tiffany last year, which followed the acquisition of Bulgari in 2011. These two acquisitions have helped propel LVMH’s jewellery division as a contender against previously unchallenged market leader Richemont (and has prompted many to suggest that Richemont and Kering should forge a strategic alliance).

This month, after announcing a majority investment in Off-White, partnering up with Phoebe Philo to birth her namesake brand and acquiring beauty player Feelunique via its Sephora subsidiary, LVMH chief financial officer Jean-Jacques Guiony said that the group was no longer looking for transformative acquisitions. Not so for Kering, which on the back of announcing the acquisition of Danish luxury eyeglass maker Lindberg this month said that this add-on acquisition to its eyewear division did not preclude a more transformational move. “We are watching the market, working to find the best target at very good conditions,” Kering group managing director Jean-François Palus told analysts. “That’s what we’ve been doing in past years and what we will do in the future.”

All eyes on Italy

Italy has long been touted as a source of luxury M&A deals due to a plethora of family-owned brands with looming succession issues. Speculation over the future of Giorgio Armani has been rife for many years, so this month’s revelation that Agnelli heir John Elkann was considering a tie-up with the fashion designer as part of a plan to build a luxury conglomerate potentially anchored around Ferrari came as little surprise. What is new, however, is the possibility of a cross-over between luxury cars and luxury fashion: the two have traditionally stayed in their respective lanes as the synergistic merits between the two segments are yet to be proven.

Other Italian brands that have made the headlines this month include Etro, in which LVMH-backed L Catterton bought a 60 percent stake, and Zegna, which is raising $880 million by combining with a US special purpose acquisition company (SPAC) launched by European private equity group Investindustrial and led by Sergio Ermotti, former chief executive at Swiss bank UBS. The SPAC will list in New York, giving the menswear company an enterprise value of $3.2 billion and funds to help it expand in Asia and the US. These last two deals are interesting in the sense that both brands will remain independent for the foreseeable future, thus putting succession issues on hold.

Before Investcorp’s investment in Gucci became legend, and even for a while afterwards, private equity steered clear of luxury. Financial debt, the kryptonite of private equity, and a relatively short investment horizon tend not to go hand in hand with the long-term brand building exercise that is luxury. Furthermore, the multiples at which luxury companies are valued are high due to the resilience and profitability of the sector, making it harder for funds to find “good deals.” Nevertheless, we have seen a number of consumer/luxury-focused investment vehicles emerge over the last decade, typically fronted by an industry veteran or backed by a luxury group. Francesco Trapani, previously chief executive of Bulgari and LVMH’s watch and jewellery division, announced the launch of a SPAC this month with the aim of raising €225 million to acquire a European consumer products company.

Turnarounds are an area where private equity and luxury often intersect, effectively following the template laid down by Investcorp’s Gucci investment. In 2017, Theo Fennell was bought out of administration in a management buyout backed by turnaround specialist Endless. This month, founder Theo Fennell along with managing director Neil Sussman took back full control of the company after four years of investment focussing on digital and CRM. With the right investor, brands can sometimes execute turnaround strategies that may otherwise be punished by more short-term focused public markets.

The changing face of retail

Specialty retail continues to gain momentum, especially when it comes to beauty. LVMH-owned Sephora acquired beauty e-tailer Feelunique this past month, having just announced a partnership with Zalando at the end of June. Sephora, which has over 2,000 stores worldwide, has no presence in the UK, while Feelunique has a strong, albeit online-only presence in the UK. Sephora is present in Germany but is up against local market giant Douglas, so perhaps its Zalando tie-up is a stealth move to capture more customers in Europe’s largest economy. Meanwhile, Jacques Bogart — a fragrance and cosmetics business with a portfolio of nine owned or licensed fragrance and cosmetics brands, which has recently branched out into fragrance retail — acquired 41 Douglas-owned Nocibé stores in France. Having embarked on its speciality retail journey in 2008, Jacques Bogart now boasts over 400 boutiques worldwide.

By contrast, the department store sector is for sale. The Weston family has hired bankers to advise on the sale of their European department store brands — which include Selfridges, Arnotts, Brown Thomas and De Bijenkorf — at a price tag of £4 billion. Neiman Marcus, having just resurfaced from bankruptcy, is now reportedly considering selling its crown jewel Bergdorf Goodman. The department store sector has been on a long and rough ride, with luxury brands diverting sales towards their ever-growing network of directly operated stores, specialist retailers such as Sephora sucking the air out of their ground floors and the internet making physical shopping an optional experience.

Because upstream acquisitions lack in brand name appeal, they often do not make the headlines, but their importance should not be underestimated. Chanel has quietly kept the haute couture industry alive by acquiring a number of specialist workshops over the last four decades. Almost every silk, tweed and leather camellia you see on a Chanel product is made by the house of Lemarié, while every signature button on a Chanel jacket is created by Maison Desrues. Goldsmiths Goossens fashion Chanel’s costume jewellery, while the embroidery house of Lesage produces the myriad variations of Chanel’s signature tweed. There are others: shoemakers Massaro, Franco Ballin, milliner Maison Michel, pleater Lognon and specialist embroiderer Montex to mention a few. And let’s not forget glovemaker Causse, and cashmere specialist Barrie Knitwear. This month, Chanel announced the acquisition of Paima SRL, an Italy-based company engaged in manufacturing outerwear from knit fabrics.

Whilst joint ventures between a luxury brand holder and a local distributor in markets such as the Middle East are commonplace, this month has thrown up some novel partnerships between competitors in response to today’s rapidly changing retail landscape. US department store group Nordstrom announced a partnership with Britain’s Asos this month in which Nordstrom will buy a minority stake in four of the fashion brands Asos recently acquired from Arcadia (Topshop, Topman, Miss Selfridge and HIIT). As part of the agreement, Asos will retain operational and creative control of the brands. But Nordstrom will now have the exclusive retail rights for Topshop and Topman in North America and own a minority stake globally. The Seattle-based retailer will also become the only physical store presence for these brands worldwide and customers will also be able to pick up Asos.com orders at Nordstrom and Nordstrom Rack stores. 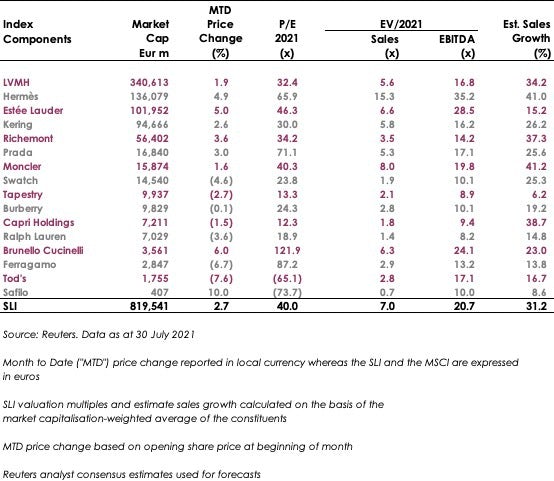 The Savigny Luxury Index (“SLI”) gained close to 3 percent in July whilst the MSCI posted a flat performance for the month. In addition to the flurry of corporate activity above, results for the first half of 2021 were strong across the board. Whilst some companies (Prada, Capri, Brunello Cucinelli) expressed optimism for the second half of 2021, others (Hermès, Burberry, Moncler) were more prudent about the outlook for the rest of the year. 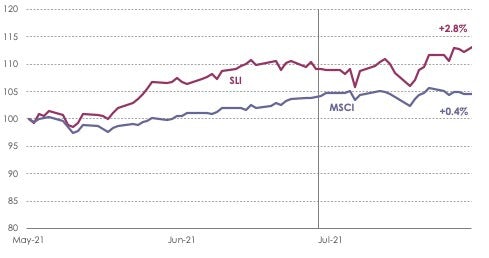 As Armani Speculation Swirls, What’s Next for Italy’s Dealmaking Surge?