Osman Yousefzada journeys to post-colonial Bangladesh to meet the workers who make our clothes.

Osman Yousefzada journeys to post-colonial Bangladesh to meet the workers who make our clothes.

Before my journey, a thousand visions of Dhaka had come to my mind: the collapse of Rana Plaza, when the world woke up for a while, saw the real human cost of our clothes, and then went back to sleep again; its dense population, with migration levels internally at 500,000 per annum; and its vulnerability to climate change (the country is one of the lowest-lying and most threatened in the world). By 2050, it will lose 11 percent of its landmass, displacing over 15 million people. On top of this, Dhaka is the world’s second worst city for air pollution.

But despite everything, Bangladesh has managed to become the second largest exporter of garments worldwide. It is ranked number eight as the happiest country in the world. And although it's a casualty of climate change, it sits in second place for the smallest ecological footprint per resident according to the Happy Planet Index.

The Fiorucci Art Trust had invited me, as part of a troupe of artists, to take part in the Dhaka Art Summit. I was travelling armed with a suitcase of pre-owned clothes scoured from London’s charity shops: all from high street brands, each with a “Made in Bangladesh” label sewn into them. These clothes had already had previous lives, owners and memories, but were now discarded.

I was taking them back full circle, hoping to reunite them with workers who had made similar garments. I didn't know what was going to happen, but I had a vague idea of what I was going to do with the clothes. The name of a fixer had been given to me, and he was going to get me access to factories. Later I would get to speak with workers, meeting them after hours in their union office.

We are all increasingly aware of the plight of the millions of lowly paid garment workers, yet to see them as such makes it easy for us to dismiss the problem. They are a mass, they are millions, what could I possibly do to change things? I simply wanted to approach the garment workers as professionals and to hear their individual thoughts and reflections on the jobs they do.

What was to come out of these interviews was so profound that each time I listen to the recording I shudder. I was keen to find out what the workers thought of us, their end customers, and in turn how they viewed themselves, and their place in the world. Following a workshop where we unpacked the suitcase of clothes I had brought with me — after discussing with them — I decided to ask a few questions. 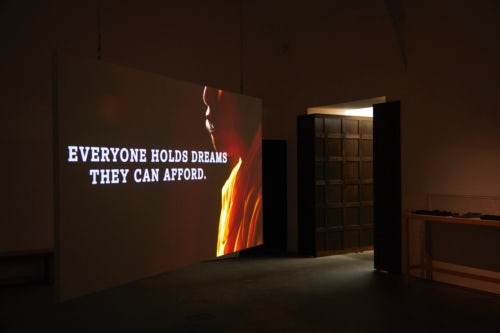 I asked them to imagine and describe the people they made clothes for. What did they do? Where did they go? How did they behave? What was their lifestyle?

These were questions that a marketing agency might ask a business client to understand its customer base. Questions that no-one had thought to put to these workers, whose relationship with the end user was so remote, many transactions away down an international supply chain.

One of my interviewees imagined her customer: “She is not black like me, she is much fairer. Her eyes are blue and her hair is red or blonde. She is taller, she talks politely and her behaviour is very decent.”

With such penetrating words, she conveyed her pride in her work. Her customers were beautiful, polite and respectable people, and workers like her were carrying out a very important role in garbing them for their important lives. Yet they still saw themselves at the bottom of the pecking order. Of course, all of these imagined and important princesses were fair, with light hair and blue eyes.

Colourism is still so prevalent across the Indian sub-continent. It is left over from the British colonial period, when Western standards of beauty were imprinted on the local psyche. To add legitimacy to these ideas, science provided race theory, allowing a classification of people, where whites sat atop the hierarchy as the most superior and most beautiful. In British India, the width of the nose was measured to differentiate between Indo-Aryans and Dravidians. The lighter the skin, the higher your classification, and your chances of favour with the ruling colonial elites. These ideas were super-imposed by the colonialists onto a prevailing indigenous caste system, and these ideas still remain today, bolstered by years of media reinforcement upholding Western ideals, even in former colonies where originally there was no caste system.

What hit me was the thought that this toxic racist baggage was still weighing on them; this lingering, false, enforced idea of beauty.

The correlation between social and financial success and the shade of one’s skin tone, can be seen in the region’s obsession with skin lightening creams peddled regularly by Bollywood stars. Colourism applies across genders, but it's typically the women who have the biggest socio-economic disadvantage. If you're a dark, female, and from a family with limited resources, you are one of the undesired.

The privileged positions of their customers, described by the workers, is a re-enforcement of their own position as The Other. I asked one of the workers if he wanted to go abroad, he said he would like to visit, “but the path to making a new life out there is full of pain. Only after the pain will you get your results.” As a rural migrant worker, he knew pain, but I wondered, had he seen results? The workers are paid so little it is almost impossible to work their way out of poverty.

What hit me was the thought that this toxic racist baggage was still weighing on them.

The workers went on to imagine their customers as only eating fruit and drinking juices in a similar way to how we imagine Hollywood celebrities lounging by the pool in their palatial residences. We project our own longings onto the people we idolise. Yet, in the case of the garment workers, the associations with race, class and colonial history mean that the imaginings they shared with us triggered a visceral awareness of our own Western privilege.

In the West, we are told to dream big, follow our dreams and be whatever we want to be. We are told there’s no restriction on social mobility. Yet the garment workers have tempered and suppressed their dreams. They “dream within their limits,” in the words of one worker.

The grandeur and wealth of their imagined customer was so great that one of the garment workers stated that the people she made clothes for would sometimes wear them for just a day, and no more than two weeks before they threw them away. They weren’t entirely wrong, yet their words didn’t just convey the plenty of our society; they also exposed our extreme wastefulness.

The international clothing supply chain operates an Uber-like system of contracts. Everything is outsourced, removing the brands from the people who actually make the clothes they sell to us. When we consume the end product, we have zero insight into how it was made or the individual workers who made it. In this way, workers are virtually sanitised from our minds, operating as shadows in a globalised supply chain. Yet they are the source of cheap labour, which the Global North relies on to keep its consumer economies whirring.

The reality of a top sold for five or maybe ten dollars, the same as a cup of coffee at Starbucks, highlights the prevalence of disposability in our culture. We treat clothes shopping not as the procurement of goods, but as a leisure activity, a pastime. And I question my own role in this as a designer. I’m not producing a large amount of clothing compared to some of the fashion giants whose products are manufactured by the million in Bangladesh. But I am part of a system which sells the dream and pushes newness season after season.

We owe it to the people who make our clothes to take a hard look at ourselves and our attitudes to creating, selling, buying and wearing fashion. How much could be solved by a closer human relationship with the makers of our clothes?

Osman Yousefzada is an artist, writer and fashion designer.

Film credit : The Film ‘Her Dreams were Bigger’ was commissioned by the Ikon Gallery, and launched at part of Osman Yousefzada’s first solo show ‘Being Somewhere Else’. It was subsequently shown at the Whitechapel Gallery as part of the Radical Figures Spring show in 2020. The film was made possible by the support from eco age and Livia Firth.

Protecting Workers' Rights Is Harder Than Ever in a Pandemic