MUMBAI, India — Mumbai is still buzzing. Earlier this month, Prime Minister Narendra Modi inaugurated the 'Make in India' week, a gargantuan event in which the government estimated participation of over 1,000 companies and delegates from over 60 countries.

The far-reaching initiative was launched globally in September 2014, as part of the Indian government’s renewed focus on invigorating the country’s economy. Foreign direct investment (FDI) reforms are being implemented in manufacturing and 14 other sectors as diverse as agriculture, defence and broadcasting.

Prime Minister Modi, undoubtedly one of the most prolific orators and mass communicators the country has ever seen, announced sweeping changes to manufacturing, an industry that already helps employ millions of skilled and unskilled youth entering the market every year.

By opening up to outside investment, partnerships, expertise and efficiencies, the government aims to usher in an era where India will not only produce for the world, but also feed a growing consumer base. But what does it mean for the global fashion industry?

Because the government has identified India’s textiles and garment category as one of the 25 sectors capable of being a world leader, it has allowed this manufacturing sector (among others) to be the beneficiary of 100 percent FDI. In the past, key sectors of the Indian economy have been under intense protectionist measures that compel international companies to forge partnerships with local companies if they wished to do business in India. 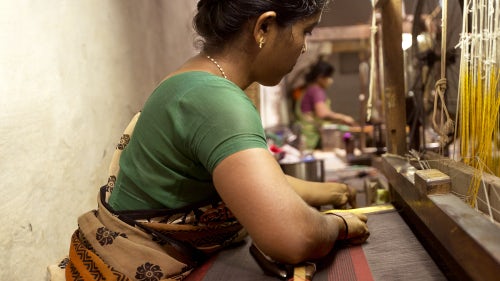 A weaver in India | Source: Shutterstock

“India has a long-standing history of textiles” says Darshan Mehta, president and chief executive of Reliance Brands (a subsidiary of the Indian conglomerate Reliance Industries) which has partnered with international brands, including Ermenegildo Zegna, Diesel, Paul & Shark and Kenneth Cole, to open stores targeting the expanding Indian market.

“However, the quagmire of frequent indirect tax policy changes (excise duty on garmenting has been levied and removed three times over in the last decade), unfairly combining garments with footwear (a huge sector with a tiny sector), along with incongruent duty structures have made way for other ASEAN countries — including Myanmar, Bangladesh and Vietnam — to steal a march over India,” Mehta continues. “This despite our natural advantages of robust cotton production, cheap labour and a rich history.”

"What we have to understand is the importance of free trade agreements that allows [goods from] certain countries to come in without duty. Bangladesh has a free trade into Europe, and now Vietnam is going to get free access to the US. India needs to work on aligning policies like this to really unravel its potential," adds Kulin Lalbhai, executive director of Arvind Limited, India's largest denim manufacturer and the world’s fourth-largest producer and exporter of denim.

However, manufacturing is now being liberalised and the textiles and garment industry should benefit. The changes could not have come sooner given the opportunities being created as China offshores more of its manufacturing industry, after decades spent competing fiercely with India and other countries in the sector.

“This will bring in large scale investment into the country. But what is to be seen is how best global practices will be adapted by these companies in India,” says Bharat Shah, chief executive officer of Shah Narayan Das & Co. and founder of Ekaya Banaras, who was a speaker at the ‘Make in India’ textile seminar.

“For instance, how India will regulate carbon footprint and how labour laws [will] be interpreted and adhered to in India are crucial to the success of the new policy. Bangladesh has seen one of the worst disasters due to negligent labour laws pertaining to safety and security, and it must never be repeated,” says Shah.

Nevertheless, with key drivers now established — namely improving the ease of doing business in India and simplifying the foreign investment process — the bonhomie is palpable across the business community. Billions of dollars of investment is being committed and the mood across the country is carpe diem (seize the day).

Take Amit Agarwal, country head and vice president of Amazon India, who launched Amazon’s global selling program for sellers in India last May and is riding the wave of the ‘Make in India’ initiative to make it more global. “[We] have since then expanded from two countries to nine countries currently. These include US, Japan, Canada, France, Germany, Spain, Italy, UK and Mexico. Over 6,000 sellers are leveraging this program to take their ‘Made in India’ products to Amazon customers in these international markets,” he says.

Business leaders around the world have India in their sights — and with good reason. Recent accolades have been impressive: Ernst & Young and the Financial Times have placed India as a global No.1 investment destination; Frost and Sullivan ranked India No.1 in the Growth, Innovation and Leadership Index; Foreign Policy magazine declared India No.1 in the Baseline Profitability Index. And the IMF has ranked India as the world’s fastest growing large economy.

In a July 2015 report on the textile industry by strategic advisory firm Corporate Catalyst India, the Indian textiles industry (currently valued at around $108 billion) is expected to reach $141 billion by 2021 and is the country’s second largest employer after agriculture. Over 35 million people are employed in this sector either directly or otherwise. And the Indian textile industry has the potential to grow five-fold over the next ten years to touch the $500 billion mark, of which domestic sales would constitute $315 billion and exports $185 billion.

Affordable raw material and labour, great strides in textile technology and the ‘Make in India’ policy reforms could together make India not only a preferred but a formidable destination for foreign investment in the textile and garment business.

From the standpoint of the luxury fashion sector, what is particularly interesting is that the other half of India’s textile story is about handlooms, a subsector which could play a big role in forging the global luxury industry ahead.

Top international brands in Europe and America, such as Chanel, Dries Van Noten, Lanvin, Naeem Khan, Valentino and Elie Saab, are already dipping into this vast reservoir of craft. But the recognition that India’s biggest soft power lies in the country's handwoven heritage is yet to be fully exploited, which means the full benefits to the economy and the workforce remain elusive too.

At the moment, ‘Make in India’ seems heavily skewed towards industrialised textiles, as opposed to handmade textiles. India-based NGO Dasra reported that an estimated 7 million craftspeople work in the craft industry, according to official figures (and up to 200 million, according to unofficial sources). From 2014 to 2015, Indian handicrafts exports stood at $4.5 billion.

One can argue that given India’s handicraft legacy this is a modest number, but this also demonstrates its vast potential under the right stewardship. With more active promotion, additional financing and tax breaks for the handloom industry, India could provide the finest handmakers of the world.

“‘Textiles and garment’ is the only sector that offers the promise and potential to preserve and promote India’s cultural identity. It is a sector that allows the possibility of mapping culture and history to context, which is very critical in today’s era of rapid industrialisation,” says Mahesh Subramaniam, the founder of Craftisan.in, an e-commerce business that celebrates the philosophy of handwork through India’s finest crafts and craftsmanship.

The Indian fashion industry is not far behind in rallying the cause of handmade textiles. As a show of support, top Indian fashion designers like Ritu Kumar, Anita Dongre, Rohit Bal, Manish Malhotra and Sabyasachi Mukherjee have created spectacular collections based entirely on Benarasi handwoven silks.

Sunil Sethi, the craft-loving president of the Fashion Design Council of India has orchestrated fashion shows in historic textile hubs, including Ahmedabad and Banaras, with catchy titles like “Huts to High Street”” to “Born in Banaras — Crafts of India”. He has also harnessed the star power of leading Bollywood names like Sonam Kapoor and Salman Khan to walk the runway in indigenous fabrics, taking the textile conversation from grassroots to glamour.

“Look at the humble khadi,” says Sethi, referring to the handspun fabric that became Gandhi’s symbol of self-sufficiency during the British Raj. “It is a tour de force in the textile sector, providing the perfect context for a meaningful discourse. It narrates a universal tale of how a handmade fabric can find soul-stirring reference in today’s fast paced milieu.”

“Our vision is to recreate the inherent talent of Indian weavers which has been dying out and forefront, trickling down to everyday wear,” he continued. “My aim is to create awareness and shift perceptions to turn this love of handmade into a movement [and] innovation is the key.”