SEOUL, South Korea — Designers at Seoul Fashion Week (SFW) are certainly fond of a slogan. Practically every brand on the roster came up with a social-media worthy catchphrase to spell out on bomber jackets or hoodies sent down the runway. At the show of goth-led brand Vlades, designed by Moo Yeol Choi, a passage of sweatshirts read “High Fashion is Dead”. Choi might have been saying it with tongue in cheek, but it’s an appropriate summation of the way many Korean designers see fashion now.

While the high-end fashion industry in the West wrings its hands over the speed and voracity of a system in flux, in Seoul there's an unapologetically populist approach towards fashion. More is more and everyone can have a slice of it. From the fervour of the street style photographers and the hysteria of rabid fans following K-pop stars around the shows to the music-driven stunts and the sheer number of looks on the offer, the fashion week experience is multiplied and intensified here — and slickly showcased at the Zaha Hadid-designed Dongdaemun Design Plaza.

South Korea’s biannual fashion event has seen many incarnations over the years but is now in its second season under the guidance of Jung Kuho, the former creative director of Samsung’s fashion division. And according to insiders like Kathleen Kye, it is Jung who is behind the impressive transformation of the event into Hera Seoul Fashion Week — as it is currently branded.

“Two years ago, when we did shows, it felt like a birthday party or something,” says Kathleen Kye, who showed her collection at SFW last week. “Now with well-respected press and buyers coming to the shows, it feels like a much bigger thing.”  The list of buyers and journalists invited to SFW over the last two seasons has indeed been impressive, with retailers like Barneys, Harrods and MatchesFashion.com represented and attendance from publications like i-D, Dazed, GQ Style and Love magazine.

The general consensus among international guests is that SFW, whilst not breaking new ground in the clothes that are shown on the runway, does manage to integrate fashion within a K-pop driven culture that appeals to the masses.

“In Europe, it’s the designers who set the agenda for fashion, but here, it comes from other parts of its culture,” says Guillaume Steinmetz, one of the founders of Paris-based concept shop The Broken Arm, who attended SFW for the first time. In other words, designer fashion in Seoul is not loftily speaking to a small elite, but instead blares out to a wider audience, accompanied by a system of celebrity endorsements, accessible price points driven by e-commerce and of course, a mega-watt K-pop soundtrack.

“They’re a fashion forward market,” says Steinmetz on the enthusiasm of the Korean fashion customer. “They were actually one of the first people to support The Broken Arm, so you can definitely see how they will develop their own aesthetic of creativity in the future.  It’s only the beginning.”

Clothes are not Necessarily the Protagonists

Walking into Dongdaemun Design Plaza (DDP) for the shows, you have to wade through a sea of street style photographers and willing subjects lined along the concrete ramp, to get to the venue. A quick scroll through tagged pictures of #SeoulFashionWeek and street style images of toddlers trussed up in trendy outfits, Korean “it” models and selfies of enthusiastic show goers dominate, with the catwalk popping up only every now and again. 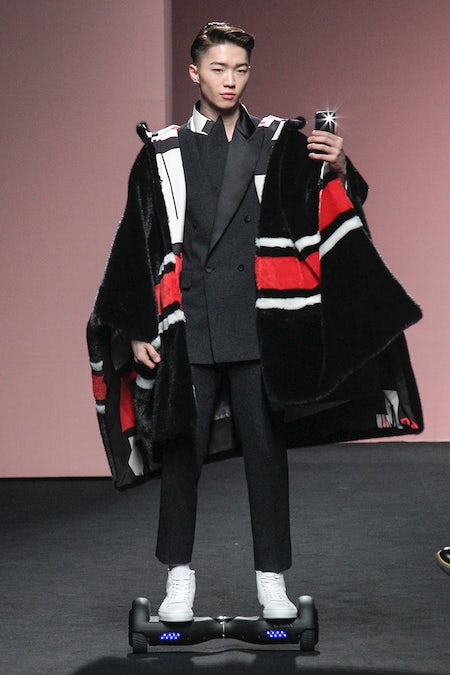 Inside DDP, the shows were often choreographed to garner maximum buzz. Catwalk antics ranged from models riding the catwalk on hoverboards at Heich Es Heich to smearing faces with lipstick at Yohanix to drummers in a cage at Charm’s to a show-stopping twerking dance performance at Kiok. Sponsors also ruled the roost with models welding Samsung phones and selfie sticks overtly on the runway. Then there were the actual celebrities themselves. Organised by the well-oiled machine of artist management companies in Seoul, K-pop stars, K-drama and film actors and actresses were strategically placed at almost every single show, dressed in the designers’ clothes, sometimes without the designers even knowing who would be attending their show.

Members of super girl group Girls’ Generation and actor Yoo Ah-In caused the most amount of chaos, with fans knocking over show seating just to get a snap of their idols. Some designers paid homage to Korean celebrity culture in their shows. At Beyond Closet, models were seen swaggering about with bottles of Jay Z’s ‘Ace of Spades’ champagne on a runway styled as a private member’s club. Promising menswear designer Munsoo Kwon’s collection was inspired by early 90s Korean boy bands and even had a group of screaming fans to cheer on every model in their baggy tailoring and B-Boy outfits.

What fashion veterans coming from the United States and Europe would call “noise” is in fact what makes SFW unique as an entity. Some would say that’s to the detriment of the clothes, but in Seoul, it would seem that so long as there’s enough star power, a label can thrive. For Bosse Myhr, menswear buying director of Selfridges, the appeal of Korean fashion is that the clothes comes with all those side components.

“There were things that we liked that have a good standing on their own, at which point a showcase in the store would be interesting,” says Myhr. “If you bring the K-pop, the fashion, the models, the designer and the fans into one place — that’s when you have something new. The 360 degree approach towards marketing fashion as a whole, is really interesting and something that doesn’t exist in Europe.”

With a few exceptions, the majority of the shows at SFW skewed towards accessible streetwear and sporty styles. A quick wander through the Doosan building (more commonly known as Doota) and you’d see these casual tropes repeated. “It’s sometimes hard to see the difference between what you see in Doota mall and on the catwalk,” says Minju Kim, a Seoul-based designer, who came to international prominence with her Antwerp Academy graduate collection, which won the H&M Design Award in 2013.

Uniquely, in Korea, having a second line is quite normal, even for young designers and is often a necessity to build a strong domestic business. “In Korea, there aren’t that many stores that support luxury Korean designers and [they] are often seen as inferior to European ones,” says menswear designer Munsoo Kwon. “I didn’t have any choice but to launch my second line and sell it myself.”

Most of the Korean brands showing at SFW push their own e-commerce, where second line sweatshirts and simple pieces have a higher rate of sales success. Steve J and Yoni P, one of Korea’s most established designers, made the decision to show their second line SJYP on-schedule, themed around the phrase “Every weekend blue everyday”. The collection did exactly what it said on the tin and for the duo, whose brand recently received investment from the South Korean telecoms company SKT, it falls on their second line to sell and make up the bulk of the business (Harvey Nichols, Selfridges and Net-a-Porter already stock the label).

More importantly, the approachable silhouettes and wallet-friendly pricing falls in line with global retailing.  The shift and emphasis towards contemporary price points on shop floors around the world is even more intense in Korea, where the lowering of local production costs can be negotiated comparatively easily. For retailers like Selfridges, this is a plus point. "The quality is great for the price and at Selfridges, we sell everything from Primark to high end," says Myhr. "We like to look at fashion from a democratic perspective, which is what they do in Seoul."

Across the main Autumn/Winter 2016 shows, the influence of Vetements was already apparent and at the shows in Seoul, the drip-down effect of designer Demna Gvasalia was evident everywhere. Marques’ Almeida, Jonathan Anderson and a dash of Phoebe Philo were also primary references. These Korean echoes of established designers can range from subtle nods to blatant copies. But for a market driven by pop culture, design provenance is often less relevant. 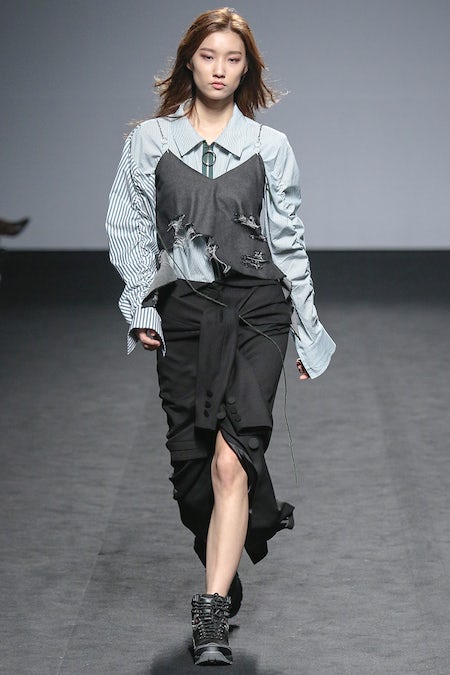 Some designers showed signs of developing distinct aesthetics, despite the heavy referencing elsewhere. R.Shemiste impressed with its ripped up Japanese souvenir jackets and anarchic tailoring. PushButton emerged as a buyer’s favourite with its mix of deconstructed laced-up jackets, corseted tees and anime character knitwear. D.Gnak, with its dark and brooding style has already found its way into stores like Ssense and Antonioli. Brands like Fleamadonna, Kye and Kiok also contributed to the K-wave aesthetic with fun furs, cheeky graphics and interesting street style mash-ups. One notable absence from this season’s event was Low Classic, designed by Lee Myeong Sin, a minimalist brand set apart from the poppier counterparts at fashion week.

A visit to Minju Kim in her quiet studio in the Bukchon Hanok village, away from the hubbub of the main venue, sees a very different sort of Korean designer ploughing away at quirky character motifs and unique (and therefore expensive) textiles. “I try to be unique and not to compromise but it’s tough within the Korean system,” she laments.

A push to showcase young designers was made this season, with the introduction of SFW’s first trade show called Generation Next, located forty minutes from DDP in the northern part of Seoul. “At the moment, there are many young designers that aren’t quite ready for the process of going global, which is the reason why I decided to create a specialty trade fair,” said Jung. “It’s just the beginning, of course, and we will learn from the experience.”

“They have to establish their business first and be able to find the funds to enter the global market,” he adds. “For years, the domestic market was so huge that they didn’t have to go abroad. Now they have to spread their wings.”

Going abroad for many of the SFW designers means selling to China, one of the most dominant overseas markets for Korean designers. But the interest from further afield has meant that Jung will be taking the event to Europe in a B2C context. “The next step is to take designers to the customer. We’ll be working on a project with Printemps and in September, during Milan Fashion Week, we’ll do a pop store at Excelsior.” For Joo Hyun Ha, buying director of the Milan department store, the customer base dictates their choice to take on Korean designers. “In our store, we have a lot of Chinese customers and Korean brands are really popular with them.”

What will be interesting to see further down the line is whether a new generation of designers can disconnect from the K-wave and truly spread their wings, much like Wooyoungmi and Juun. J did before them. There is no discounting the future potential for more individualistic design to emerge from Seoul Fashion Week but, as the event closed with a beautiful show by traditional hanbok designer Tchai Kim, you were left wondering whether younger designers could be brave enough enough to show a more rooted sense of individuality.

“They’re definitely keen to show the world that they have a voice,” concludes Myhr.

Disclosure: Susanna Lau travelled to Seoul as a guest of Seoul Fashion Week.