NEW YORK, United States — A young woman stares directly at the camera before launching a diatribe in Mandarin about her nagging relatives, peppered with biting comebacks. In another video, she does a spot-on impression of celebrities on the losing end of an Oscar, feigning appreciation as they listen to the winner drone on. The personality behind these videos is Jiang Yilei, better known by her fans in China as “Papi Jiang,” a 29-year-old aspiring director and — at the moment — one of the most influential online personalities in China.

Is she a fashion icon in the making? Probably not. But the popularity of her video clips represents a shift in China’s marketing landscape that the global fashion industry would be reckless to ignore. While the nature of Papi Jiang’s videos and unremarkable fashion sense would dissuade many brands from considering a collaboration, the vlogger’s swelling and devoted fan base of “normal people” may be a godsend for brands stung by China’s retail slowdown.

The most impressive thing about Jiang is her sense of timing. Jiang’s videos hit their stride and gained massive attention around the Chinese New Year — a time when young Chinese are under immense pressure from nosy parents and family members, and escape via social media or by watching online videos on their smartphones.

Since posting her first video last October, Jiang has built a fan base 10 million strong on Weibo alone. This may still lag behind traditional Chinese celebrities but, as of late March, Jiang’s WeChat posts have nearly four times the views of celebrities like 36-year-old film star Gao Yuanyuan, and three times higher interaction rate of posts by the nation’s sweetheart, actress-singer Yang Mi.

Jiang’s 70 or so short video clips on Chinese platform Tencent Video have attracted more than 166,000 subscribers and 177 million views. The vlogger — whose jibes include making fun of women who shop too much — is certainly not the first person in China to upload no-budget, comedic takes on society. So what is it that’s rocketed her to online fame in a matter of months?

Perhaps more than anything else, the secret to Jiang’s success is her championing of “diaosi” culture — a youth subculture in China that sarcastically translates to “loser,” but more accurately means “ordinary” or “normal.” In her videos, the charismatic Jiang isn’t showing off her new Bentley car or Hermès Birkin bag, or bragging about her apparently perfect eyes, skin, legs, or lifestyle — as was the trend for most Chinese online “celebrities” in recent years.

Instead, Jiang describes a life that resonates with millions of Chinese millennials, one that includes frustrating relatives, parental pressure about money, relationship, and career prospects, and the annoyances of modern Chinese society.

Diaosi culture in itself isn’t new, but what the rise of low-key stars like Jiang indicates is that it is taking over a certain youth demographic — and that has implications for the fashion industry, which has spent years (and a fortune) chasing Chinese celebrities and paying bloggers in the hopes of boosting sales.

The quietly strong spending power of young mass consumers has long been tapped by popular Weibo personalities driving fans to their personal Taobao shops. Now, these normal consumers are looking to connect with brands on the more affordable side of the fashion and luxury spectrum that truly “get” them.

For marketers, the cultural resonance of more ‘authentic’ voices like Jiang — well-versed about everything from society to fashion but never arrogant — underlines a clear split from China’s “bai fu mei” (literally meaning “light-skinned, rich, and beautiful”) or gao fu shuai (the male version, literally “tall, rich, handsome”) online culture. This kind of Chinese influencer is exemplified by Dalian Wanda scion Wang Sicong, known for casually spending millions of yuan out on the town. 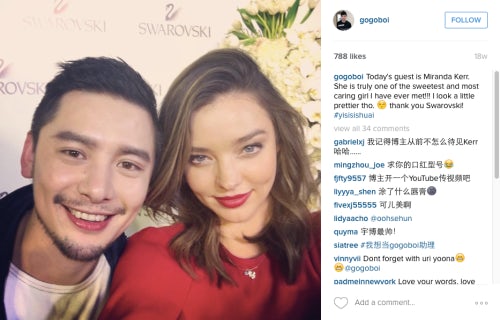 The rise of influencers like Jiang is also a departure from the likes of fashion blogger Gogoboi (Ye Si), who gained notoriety by taking a contrarian position on celebrity style, establishing a position as a sarcastic mediator between high fashion and millions of normal people. Given that he has done around 200 luxury, fashion and beauty brand collaborations over the years, it is natural for Gogoboi’s audience to question whether every post is sponsored.

While Jiang is an entirely different entity, it is feasible that the reaction of her young audience to her videos may quickly shift from “what’s she talking about?” to “what’s she wearing?” It’s up to savvy brands to take the initiative and push this transition along.

At this point, most brands active in the China market know that the true payoff from major celebrity endorsements is diminishing. Many have moved on to product seeding, sponsored posts or other forms of “influencer marketing” — which, generally, just means plucking from the same pool of mercenary fashion bloggers. However, one million followers typically don’t equal one million eligible customers, particularly in China, where many apparently influential personalities have simply purchased fans in bulk on Taobao.

According to the influence-mining firm Enflux in New York, this phenomenon means remaining skeptical about recommendations from China-based third-party firms, doing due (data) diligence and looking more closely at an individual’s actual audience, not just what they claim on paper.

Meanwhile, the audience of a diaosi online celebrity like Jiang doesn’t just want to just emulate her, they want to be her — and, crucially, they feel that they actually could. While Jiang has yet to take part in any official brand partnerships, interest in her potential value has gone through the roof. Jiang has even attracted the attention of four venture capitalists and nearly $2 million worth of investment in her branded identity.

Given this latest development, it is understandable that some wonder if Jiang’s persona was just as fake as the simulated perfection of her celebrity predecessors. An alumna of Beijing’s prestigious Central Academy of Drama — which has churned out stars like Zhang Ziyi and Gong Li — Jiang certainly has valuable connections in the entertainment business. And it’s rumored that Jiang’s hyper-growth may have been fuelled by entertainment agent (and college classmate) Yang Ming, who represents one of China’s top female stars, AngelaBaby.

Regardless of her real story, the fact remains that Jiang’s online persona has a legion of impressionable fans that hang on her every word who, the moment she finally does endorse a brand, will certainly run out to buy it.

Making her story even more interesting is the fact that Jiang has rolled out a unique business model with potential to upend brands’ marketing efforts in China. Of the four VC’s who recently threw millions behind Jiang, one (Luo Zhenyu) launched an auction model for brand partnerships, giving companies the chance to bid on ad slots in future Papi Jiang videos. Limited to just 100 “seats” and with starting bids of just $2,000, participating in the Papi Jiang auction is accessible not only to major multinationals but also smaller homegrown brands.

Could Jiang’s “ad auction model” become the new normal for online influencers to capture funding? It’s not unreasonable to think it might. For brands (as well as fans), the greater transparency of this kind of arrangement beats the opaque “red envelope” model and at least is overtly transactional, unlike stealthy sponsored posts. For any brand weary of burning marketing budget in China, this is an area worth watching in the year ahead.

The state of brand partnerships leveraging the apparent influence of online personalities brings up critical questions in 2016: Who do these people actually reach? And will their fame fizzle out as quickly as it arrived, making the shelf life of brand collaborations virtually nil?

While exercising caution is important, brands must realise they can’t take too long to leverage a trend in China. By next week, who knows, Jiang — the current queen of diaosi — may very well lose her throne. But the fact is that her “normal” fans, despite their humble appearances, wield strong and growing spending power, and should not be ignored.