The American designer has established himself as haute couture’s crown prince of extravagant, unabashed eccentricity, winning over the likes of Cardi B, Lady Gaga and Beyoncé. 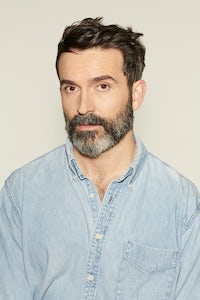 The American designer has established himself as haute couture’s crown prince of extravagant, unabashed eccentricity, winning over the likes of Cardi B, Lady Gaga and Beyoncé.

“I’ve been a total mess,” said Daniel Roseberry, looking anything but in his summer whites as he reflected on the week leading up to Monday’s digital debut of his new haute couture collection for Schiaparelli. “I feel such a release with this collection,” he clarified. “Last season felt like I was really wrestling with couture. This season felt like more of a surrender, giving in, in a weird way, in a beautiful way. It was the season I really fell in love with couture, and with the process as well.”

It shows. The collection is a kind of love letter, not only to the craft of couture, but also to some of its most iconic practitioners over the years, starting, of course, with Elsa Schiaparelli herself. A jacket she made with Jean Cocteau, covered with hand-painted taffeta roses, inspired a mini-dress for Roseberry. He uncovered original Schiap embroideries from the Thirties in the archives at Lesage and duplicated them in gold thread, also from the Thirties, also from Lesage. They embellished a hyper-tailored jacket, in pink, pale blue and green peau de soie, which, in shape and shade, evoked Christian Lacroix. Roseberry pointed out that the magic Christian was influenced by Elsa. So was Yves Saint Laurent. A jacket made from crystals and mirrors, also found on a Lesage treasure hunt (“And the exact materials that they would have used with her,” Roseberry added), referenced a piece from a YSL Schiap tribute in the Seventies. 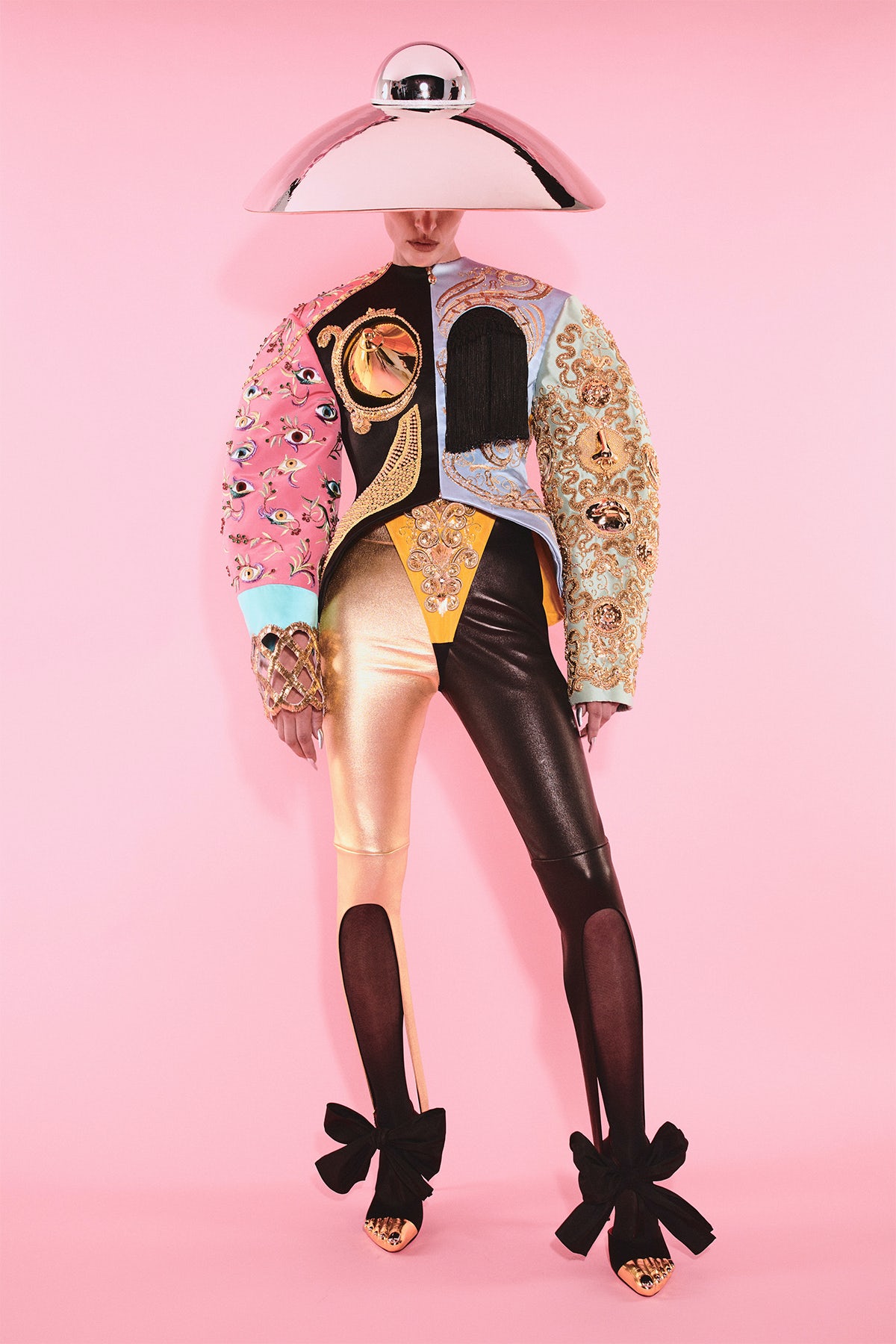 He called a mini chiffon dress his “Tina Turner dress” because it echoed an image of the singer in Alaïa. Nearby was a gold bustier made by an 80-year old artisan who trained with YSL favourite François-Xavier Lalanne, its boning disguised as the stems of the flowers that bloomed across its bust. It was paired with a low-slung mermaid skirt that was Roseberry’s tip of the cap to the genius manqué Charles James. There was also something of James in the collection’s rigorously sensual highlight, a slender black column with a bustier of orange silk modelled after Salvador Dali’s Lips sofa, with its coup de grace of a sweeping train of the same silk.

“Everyone gets a little uneasy when I start talking about this,” said Roseberry, meaning his openness in acknowledging his references, “but it’s just the way that I think. Because to me, this is that mini-Alaïa Tina Turner moment. This is a Charles James feeling, or a classic Yves sensibility, or a McQueen bumster or a pop Gaultier bustier or a Balenciaga sackback, in peau de soie instead of gazar. It’s the fashion I fell in love with. I find it so endlessly inspiring. I’m not even an expert on any of those people, but I have a few images that I’ll take with me, that will become sort of a runaway train. I always think of Michael Jackson, how his dance moves came so much from James Brown, but when you look at Michael Jackson performing, you’re not thinking, ‘Oh, he ripped off James Brown.’ It’s repackaged in a way that feels totally his. And that’s what I love so much about Bowie. He was also really taking pieces, it’s not like he woke up every morning and said, ‘This is who I am, get used to it, I’m completely original.’ He really learned, and built something along the way. And I find myself connecting so much more to that than pretending that I’m the only person who matters in my world.”

Roseberry, now 35, was appointed creative director at Schiaparelli a little over two years ago. He has established himself in the world of couture as the standard bearer for a spirit of extravagantly unabashed eccentricity, not seen since the glory days of Lacroix three decades ago. It’s the liberated, surreal spirit of Schiap herself, making its presence felt in Roseberry’s new collection as a stole constructed of shredded black plastic garbage bags knitted to a black silk base, or a dress he designed to “memorialise this moment.” Atop a simple, long-sleeved black sheath sat a pair of gold lungs, like a breastplate, glittering with strass and crystals. Striking as a piece of body jewellery, but also quite macabre, bearing in mind that the pandemic has been a largely pulmonary challenge. “Really Elsa’s spectrum goes from the macabre to the absurd and the joyful,” Roseberry acknowledged. “There is a moment like that but then there’s also the huge shocking pink rose on the black velvet pregnancy dress. I like that it doesn’t need to be one thing or the other.”

Roseberry has moved beyond homage. “I was always really hesitant to go too far into Elsa’s world because it’s so iconic and her personality looms so large it’s almost a caricature.” But I can see why he considers himself “freakishly lucky” to have landed at Schiap’s door. Her legacy was untroubled by precise codes, like Chanel’s quilting or monochrome, or Dior’s silhouettes. It was more abstract, he noted, “more like a mentality, an ethos, an ability to make connections, which she did, which I think I tried to do. It’s just that the people who are defining culture today are not Salvador Dali. They’re a different breed of people, and that’s where I hope to be landing a little bit.” Three days ago, Cardi B announced her pregnancy in a Schiaparelli ensemble. Among the other fashion standouts of 2021 were Lady Gaga at the Biden inauguration in an acreage of red silk faille and a huge peace dove brooch, and Beyoncé in her black leather minidress at the Grammys. I’d say Roseberry has landed.

And remarkably, he managed this achievement despite his isolation, first as a newly arrived, non-French-speaking American in Paris, then as the Great Confinement settled over the world. Roseberry lived that endless Groundhog Day of lockdown on his own, far from home, with no visitors allowed, but he insisted he loved the lowkey life, the no going out, because he suffers from social anxiety. Gratifyingly, it waned as his creativity waxed, to the point where he claimed the new collection wouldn’t have been possible without the restrictions he worked under. “I think if we had kept on going with where we were, we’d be arriving somewhere totally different. I don’t know if it would have had the same rigour. I know everything feels very collaged, and each look has its own world, but actually there is a simplicity to the method. One group is extreme tailoring, another is black plus gold, the third is colour plus black. There’s a real rhythm and discipline that I really want to harness, to ground all of the crazy flip flopping and references and cultural blah blah blah. And I don’t know if I would have arrived some place like that without the last year. But also knowing that next season is a physical show really changes things too. That’ll be a totally different process.”

But for now, there was the new couture, and Roseberry was recalling a conversation he had with his stylist Marie Chaix about the salons of Lacroix’s day. “She has a little boy and we were wondering what those clothes then would look like to him. The colours would be vivid, there would be a real childlike wonder and awe and innocence to everything which I really feel in my gut is so much more interesting to put out right now than something that feels hard and apocalyptic and cynical and numb. When I think of the kind of couture that I always love to look at in the Eighties and Nineties, there’s a real emotionality, it has a real heart on its sleeve quality that I cherish. I want to modernise it but not lose that wit, that sense of humour about it as well.”

Imagine Chaix’s little boy entering Roseberry’s world, with its embroidered eyes peering out eerily from everywhere, its gilded body parts and Ziggurat breasts, its bull-horned bustiers and Brobdingnagian volumes, its wedding dress with a 77-metre eggshell white taffeta train, like a torrent of Chantilly cream, and you’ll agree that Roseberry has no need of nostalgia for the prelapsarian Eighties and Nineties. He will be one of the designers responsible for galvanising post-pandemic fashion.

Last week, a television journalist asked him why his work was so different from the way he presented himself. His interrogator simply couldn’t put the two together. Roseberry had never been asked that question. It got him thinking about Plano, Texas, where he was born and raised in a very conservative Christian household. “Always left of centre” with his classmates at school, champion gymnast turned multi-threat sports star, but pretty closed down just the same. He doesn’t remember having any high school crushes. It wasn’t even so long ago in the grand scheme of Roseberry’s life, “but the whole thing feels very hazy in a weird way.” I asked him how much of what he’s doing now is about building himself a bold new world as a consolation prize, or some kind of cosmic make good.

“I think all of it,” he answered. “I think it’s all about that in a weird way. It almost feels at some point, like you’re in competition with yourself. Like, can I really learn French, is that really going to happen? But I have to. It’s time. I really want it now.”

Then Roseberry resolved his internal dialogue: “I feel like I’m just getting started.”

The BoF Podcast: Daniel Roseberry on the Schiaparelli Challenge