Vault! Alessandro Michele loves the word so much it’s the name he has given to Gucci’s new online concept store. “It’s such a pregnant word,” he enthuses. “It can be pregnant with everything you know.” He is certainly doing his best to guarantee that Vault arrives with a bellyful of wonders. “An online storage of beautiful things,” he calls it, like a virtual Wunderkammer.

Vault, which launches Saturday, is described by Gucci as “a time machine, an archive, a library, a laboratory, and a meeting place.” It is also the latest manifestation of Michele’s appetite for experimentation. He’s been doing it throughout the pandemic, exploring alternatives to the fashion shows that were curtailed by Covid-19.

But Vault’s multilayers seem like the most complex expression to date of his career-defining meld of past, present and future. “I’m obsessed,” he says. “I’m still dealing every day with the idea of present, past and the ideal future. Go back and step ahead. I don’t know, I feel always in between.”

A time machine has always been my dream. Not so much for Michele, though he admits he would really love to have “a beautiful dinner or maybe just a quick coffee” with Federico Fellini and Anna Magnani. “And maybe it would be beautiful to be at a party in Florence in the time of Lorenzo il Magnifico. Just to see what a beautiful rave was like. Because I’m quite sure that was the real one and we missed it.”

Time-travelling via Vault is scarcely on that scale, but it is still pleasingly arcane. There is a vintage section of clothing and accessories spanning Gucci’s first century. “Mutant relics,” Michele says. “I collect beautiful relics of fashion of the past, and I was thinking, ‘Why can’t we share them on a platform?’ Gucci turns 100 this year, and it’s the time to show to everybody how beautiful it would be to give a second, a third life, and more, to old things that are the most beautiful.”

The vintage stock is being hunted far and wide, from auction houses to the closets of Italian grannies who never threw anything out. “It’s pretty interesting because Gucci didn’t really work in collections, with the idea you had to change everything. They were obsessed with beautiful single pieces, scarves, a leather coat, a shirt that came from the foulard, the idea that a piece of clothing was like a bag that you could keep forever.” And there was always the idea of travel, all these little pieces that look like a cruise, always really light and fun, something quirky and special and chic, full of design, animals, flowers … Gucci was always about storytelling in the clothes.”

“A few months ago, I was reflecting how Gucci was very different from a French leather goods brand. You feel in Hermès and in other brands that they came from a big monarchy, sumptuous, perfect like a palace. You couldn’t feel the monarchy in Italian tradition. The leather goods were very practical, more human, less rigid.” Gucci invented the Jackie bag for a woman who was probably travelling, probably working. I think that they were very dedicated to the humanity of their customers. They were thinking, ‘How can we help them to enjoy their life in a very easy, beautiful but also very funny way?’” 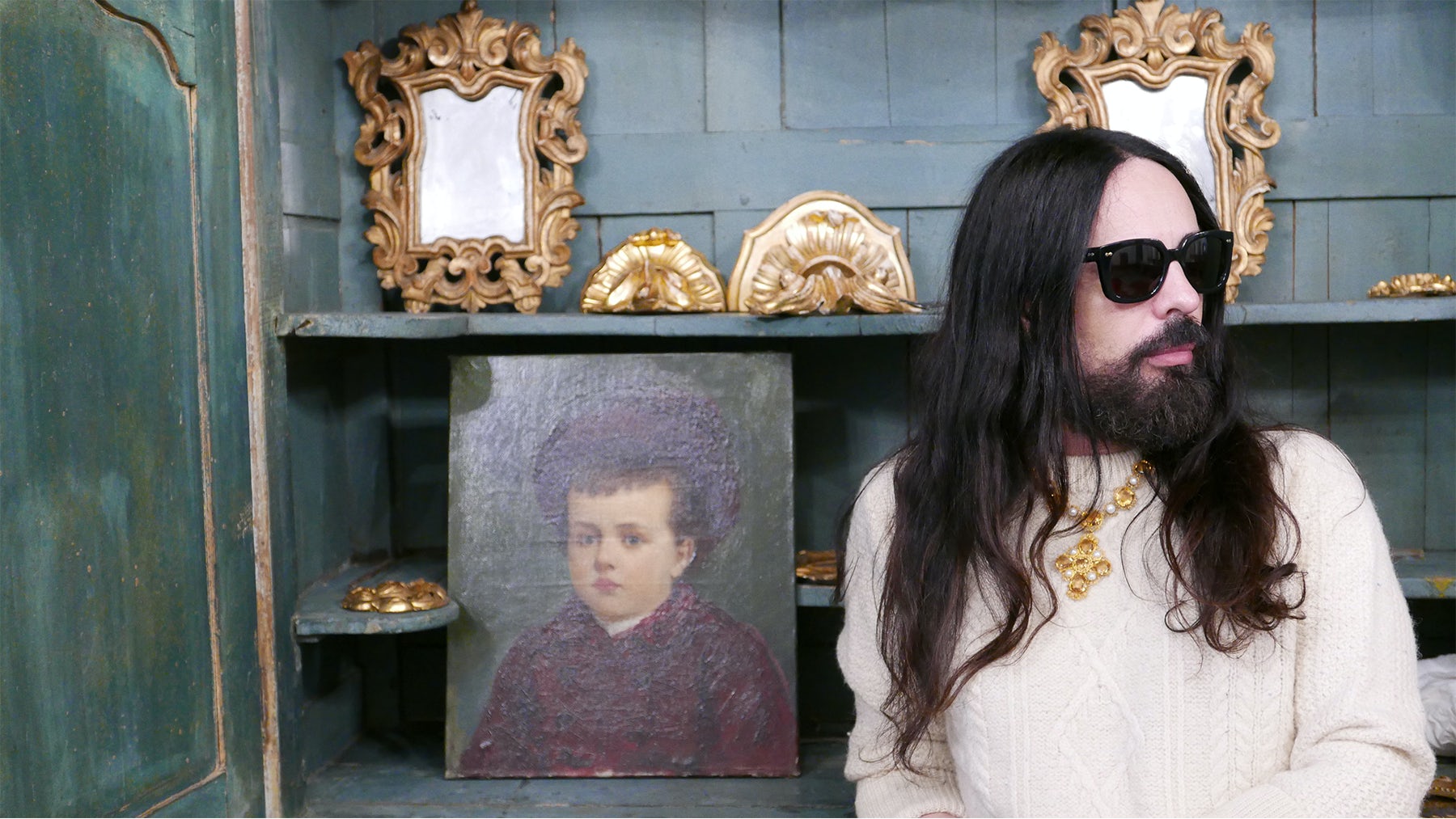 Michele is chasing that same lightness of touch with Vault. The pieces are reconditioned by Gucci’s artisans, and “touched” by him. “I was thinking always to add something crazy on top of the old things. In the past, people were obsessing to take old things and give them a new life with something different. It’s like when you go to Piazza Navona in Rome, and you see the Egyptian obelisk in the middle of the Baroque square and fountain. I wanted to do the same.”

The idea of him “re-mixing” vintage Gucci fits with the impression he made with his first show (it’ll be seven years in January). Michele’s sensibility, the way he wove a confrontational new beauty out of old forms, struck me as punk in its iconoclastic essence. There’s a lot of music in the idea of mutant relics, remixed, remastered. “Yeah, I’m more like a DJ,” Michele laughs. “You know who called me the DJ? Karl Lagerfeld. I remember the first time we met when I was young, he looked at me and said, ‘Are you the DJ?’ He didn’t think I looked like a fashion designer. It’s so true. But I think I’m more like a chef, remixing the past and the brand. The ingredients are already on the table.”

Another layer of Vault is labelled Conversations. It’s currently a platform for emerging designers, most of whom Michele already highlighted in the online Gucci Fest at the end of 2020. Ahluwalia, Shanel Campbell, Stefan Cooke, Cormio, Charles de Vilmorin, JORDANLUCA, YUEQI QI, Rave Review, Gui Rosa, Bianca Saunders, Collina Strada, Boramy Viguier, Rui Zhou: names that resonate with increasing authority, reflecting one of the most encouraging developments in the pandemic-dogged fashion industry, which is the attention being paid to the real future. This is Vault’s laboratory component, shoring up fashion’s relevance by acknowledging — and selling — a new generation of designers. “This platform, this playground is showing how relevant the idea is, especially in fashion, that the past, the present, and the new generation of designers is all together.”

Michele claims that pre-pandemic he was already thinking about different approaches to fashion, not just shows and shops. “I felt that we were so concentrated just to work in one way, I was trying to prove the idea that fashion has many, many, many ways to express itself.” Then came Covid and Gucci Fest and Gus Van Sant. “I discovered that you can really improve fashion, you can really expand in a very easy way because fashion is like a friend of yours that can dance, sing, read, laugh, drink. You can do a million things with fashion because everything is related to fashion. It’s life.”

Please highlight “read” because that’s the next part of Vault: the library. It’s the least defined, but potentially the most enlightening. “It’s still a work in progress,” Michele says, “because this could be the disconnected part. It’s the part where you can have a conversation, it’s a different way to tell a story. It’s not really related to fashion, but we discovered in the last year that it is related to fashion, because fashion is about telling things. So, it will be a very free part where you can put everything you know in terms of words. I think that it could be really relevant for a young person to enter a fashion space and find words. I know I read a lot when I started to work in fashion. The day after a show, it was about paper. Everywhere was covered with paper. So, I think that we have to go back to the words, to reading things.” Michele won’t get any arguments from me on that. The library promises poetry and short stories and interaction based on words, where elsewhere in Vault it’ll be images.

But as he prepares to launch Gucci’s latest digital experiment, Michele himself is reconnecting with the physical world. In Rome, Michele and his partner Giovanni Attili have been going to the theatre (masked, he emphasises) at least three times a week. “I really need to go back into reality,” he insists. “Me and Vanni, the first night that we went in person in front of people acting on the stage, when the lights were going down, I was on my velvet chair, and the second before everything started there was like one minute of silence, I whispered in Vanni’s ear, ‘I’m so, so, so excited.’ Like a kid. I couldn’t stay seated. I felt like I was alive. I mean, I really enjoy to make the movie, to work on other things, and I will do it for sure in a different way because that was really the proof that I can do a million things, but when I’m in Milan, showing to you all my work, my dream and the things that I have in my mind, I think this fashion stage is still relevant. Because fashion is alive, like the theatre. So, you need this 15 minutes of life. I think that I want to be backstage again.”

And that answers the question about whether the launch of Vault at a time when Gucci would once have been showing a new collection means no fashion show. (The centenary extravaganza in Los Angeles at the beginning of November is a different ballgame.) “I’m trying to finish the LA show, but I was also thinking to do something else,” says Michele. “It’s a surprise. I’m gonna do something very quickly, something that is for the brand, but it’s also for me. I spoke to [Gucci chief executive] Marco [Bizzarri] and he said, ‘Let’s do it’. I mean, that’s how we started, trying to do a show in eight, ten days. It could be a disaster, but I think that fashion is about doing things from your stomach. It’s instinct.”

It’s also faith. “I know that people wrote that we grow,” says Michele, referencing Gucci’s spectacular turnaround since he and Bizzarri took the reins. “I don’t know how many zeroes. All those kinds of things are very interesting and make me very proud. But maybe I’m prouder about how we experimented at the brand. When I go in the street, young people stop me, and they are starting to appreciate a lot of things that, at the beginning, were not very connected to fashion,” he said, referring to Gucci’s radical embrace of the wider world. “It’s not me that invented this connection. It’s the soul of fashion.”

Michele tells me about a night when Vanni and he went to see an outdoor dance performance and a thunderstorm rolled over the venue. The dancers kept on dancing in the pouring rain and the audience stayed, soaked to the skin. “Maybe in the past I would have come home and said, ‘That was so bad because the show was outside.’ But I was happy. Water is nothing, and people were dancing in front of me. And I thought, I want to go back to see you again.” And by “you,” he means “us.”

The State of Gucci