The eco-minded entrepreneur and freshly installed Chloé designer talks to Tim Blanks about her creative vision for the French house. 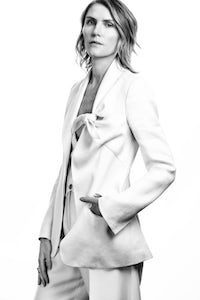 The eco-minded entrepreneur and freshly installed Chloé designer talks to Tim Blanks about her creative vision for the French house.

Gabriela Hearst’s debut at Chloé was two-pronged: the 30-look show she presented on Wednesday, and a film she commissioned for what would have been brand founder Gaby Aghion’s 100th birthday on March 1 (she died in 2014). “Gaby did her first show in Brasserie Lipp in 1952, so we did a night shoot in that area, around St Germain,” says Hearst. “I’m feeling many people are missing Paris, so there’s a bit of that as well — and a lot of Latin music.” That nod to her Uruguayan roots is one subtle way she made an early mark on the brand. Much more forceful has been her immediate impact on Chloé's business practices.

Hearst arrives at the French label as one of the fashion industry’s paragons of environmental activism. “I’m really grateful to the team because they adapted pretty quickly to something that’s a completely different way of approaching things.” She is as enthusiastic about a meeting she had last week with her CEO Riccardo Bellini and her head of production where she says she discovered her first collection will already be four times more sustainable than last winter’s in terms of the certifications Chloé has received.

“We’ve reduced the amount of cotton, we’re using fabrics that avoid the hardest chemicals, herbicides or pesticides, 80 percent of our cashmere is recycled,” she says. “We’re repurposing and reusing fabrics from within the house, outsourcing deadstock from suppliers. I don’t know if I would have been able to do this job three years ago. People didn’t like to use the word ‘deadstock’ next to ‘luxury.’ Now it’s common practice. Supply and demand. It’s the perfect moment to seize the opportunity.”

People didn’t like to use the word ‘deadstock’ next to ‘luxury.’ Now it’s common practice.

She’s also excited about Chloé's collaboration with the Sheltersuit Foundation, the non-profit created in 2014 by Dutch designer Bas Timmer to provide immediate shelter for homeless people. The Sheltersuit is a combination sleeping bag and jacket, made using upcycled fabrics. “The whole team came to Chloé for ten days,” says Hearst. “We worked on Sheltersuits but also completely repurposed and recycled backpacks. And for every one of those we sell, Chloé will donate two Sheltersuits. It’s a duty to help out, not a choice.”

Hearst’s appointment at Chloé, announced last December, sounds like it was meant to be, and maybe it was. Her mother, who lives off grid on a ranch in Uruguay, is a Buddhist, so Hearst has no problem with the dharma/karma in her new appointment. Gaby to Gabi? “I get mystical,” she says. “It was in a dream of mine. I wrote it down in 2017. Then in 2019, I went to the Hoffman Institute for one week. You go in really deep with the ‘know thyself,’ and when I came out, before the offer had even manifested, I told an alumna, ‘I am going to be the next designer of Chloé.’ I hear myself sometimes and I think I’m a lunatic, but I know there’s a mission there. And I feel Gaby Aghion’s spirit has been very much part of this process for me. She was also a foreigner, and obviously I never got the chance to meet her, but her granddaughter is coming to the show and she’s going to lend me the ring her grandmother used to wear for every show. So, I feel very emotional about that. And yes, there’s something about this that was supposed to happen. I was determined and I felt it.”

Hearst says that Chloé has always spoken to her anyway. “It said natural ease, natural cool. I couldn’t afford the clothes, but I had the Chloé perfume, I had the Edith bag. It was like the most precious thing. And 16 years later, I still have it. I never sent it to my archive. I was kind of nerdy at school. ‘Darling, don’t worry,’ my mother used to say. ‘People who are trying to be cool, aren’t.’ Gaby was naturally cool, and a lot of the designers for the house were naturally cool. They brought that essence too. It’s not a language that is too foreign to me.” 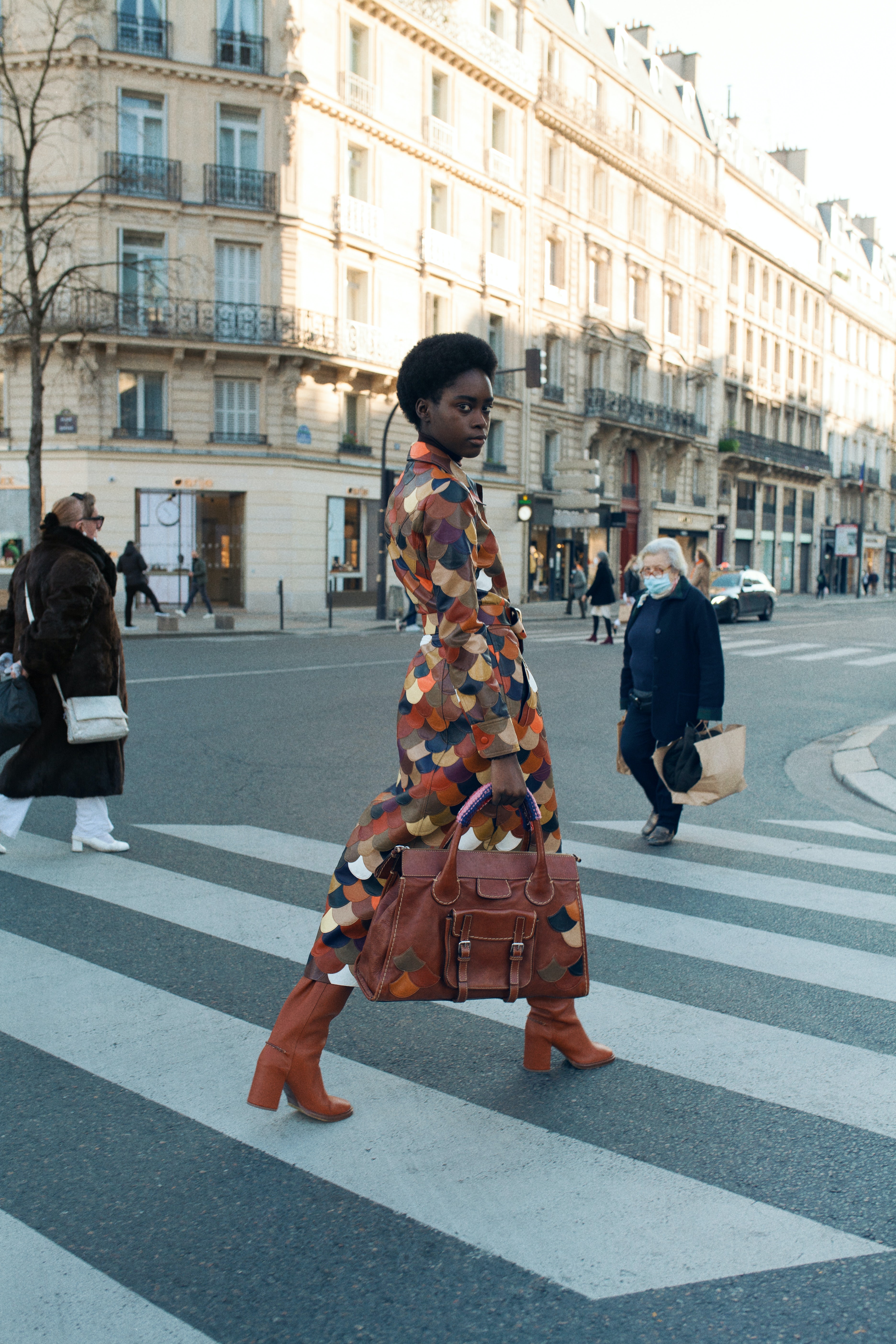 Ironically, it’s not just Aghion, born and raised in Alexandria, who was foreign. In an odd twist, most of Chloé's other standard-bearers have been too, starting with Karl Lagerfeld, whom Aghion hired in 1975. He was followed by Stella McCartney, Phoebe Philo and Clare Waight Keller, who all bequeathed their own take on a young free-spirited boho globalist, the girls you might see at summer festivals, until Hearst’s predecessor Natacha Ramsay-Levi brought back a distinctly French essence to the brand. “The way I think about it is as a heritage brand that had designers before me and there’s going to be designers after me,” Hearst says pragmatically. “I pay respect to the ancestors, and I have to ensure that the link is strong enough to continue in years to come.” She insists she’s not much for logos, so she has taken the scallop shell that was Gaby’s leitmotif and recreated it in patchwork, for a coat. The free spirit of the festival girl is evoked in a striped cashmere poncho, which gives a Gabi twist to the cape that is a house signature. “It’s very beautiful that I’m able to do something which feels personal to me, and something that also feels familiar to the house.” Of course, there are blankets, ways to make a big statement with luxe recycled fibres. “I would sell blankets all day long,” Hearst says dreamily. “Hashtag Chloé Home!” (I assume that’s wishful thinking on her part. Nothing under #chloehome looks remotely linked to Chloé).

Hearst’s success with accessories for her own Gabriela Hearst brand is thought to have been a big drawcard for her new paymasters at Richemont, the Swiss luxury group that owns Chloé and has struggled to re-invigorate and scale the brand in a hyper-competitive luxury fashion market dominated by rival conglomerates LVMH and Kering. Handbags are critical and Hearst is making an early statement with 50 Edith bags found on eBay, which have been repurposed with materials from the show for one-of-a-kind pieces. Again, she’s tapped Uruguay with a mochila bag in recycled cashmere. “For me, it’s highly desirable,” she says, “and I hope for someone else, too, because maybe I’m out of a job.” Hearst laughs heartily. “The first week I was, ‘Hey, I haven’t been fired,’ because you have to understand, I haven’t had a boss for 17 years. So, every week that I don’t get fired is a good week.”

I wasn’t trained in French maisons. I was trained in the Garment District, corner of 38th Street and 9th Avenue.

She may be all aristocratic angles, with cheekbones to make the Thin White Duke weep. She’s also the wife of Austin Hearst, the publishing heir, whom she married in 2013. But Gabriela has a garmento’s down-to-earthness. After extracting a couple of trouser suits from the rack — no buttons, languidly tied to one side — she pulls out an equally chic coat which she calls “a real schmatta.” “I wasn’t trained in French maisons,” she goes on. “I was trained in the Garment District, corner of 38th Street and 9th Avenue. This coat is wool on one side, silk satin on the other. It’s a ‘twofer,’ a day coat and an evening coat.”

A transition as easy, in fact, as Hearst claims her own has been from her New York-based label to a Parisian fashion house. “Creatively, there’s no struggle,” she declares, despite this rather extravagant analogy: “GH is Athena, daughter of Zeus, the warrior. She’s in a position of leadership and she goes into conflict in a forceful way. Chloé is Aphrodite, goddess of love. The scallop which is the emblem of the house is hers as well. She works through love, through seduction, but she’s not weaker than Athena. The approach is different, but they meet in the same Venn diagram.”

“I’ve always said you will never see the Gabriela Hearst woman travelling through an airport in trackpants,” she continues. “And there’s more scars to the GH woman: emotional and physical, C sections, biopsies. But I see my own sister as Chloé. She’s just finished her PhD, she has a boyfriend, they’ll probably get engaged. She’s starting her life. These two women are at different stages in their lives.”

When Hearst talks about a new Renaissance, she has in mind not a Roaring Twenties redux, but a new age of thoughtfulness. “I strive to have something timeless, like the Edith bag that lasts forever, and I’ll still love it decades later, or something that I’m still wearing, and it still fits. That’s what I want to have. I’m not a trend designer, I would fail miserably at that task, but I can make things that I feel women would desire for the rest of their lives. Or I’ll give it a damn good try at least.”

And, so we’ve found ourselves back at Gaby Aghion. Her granddaughter told Hearst that Gaby lived in a 600 square-foot apartment, she had four bags and all her foulards were leftover fabrics from her collections. “She was already repurposing,” Hearst marvels. “She had a measured life, where things didn’t own her. There’s a balance between you having things and things having you. I think not being owned by things is important. Rather, have objects that have a history with you. That’s in the DNA of this house because of its founder.” And thus is Gaby’s torch passed to Gabi.

The New Chloé, An Exercise in Orthodoxy